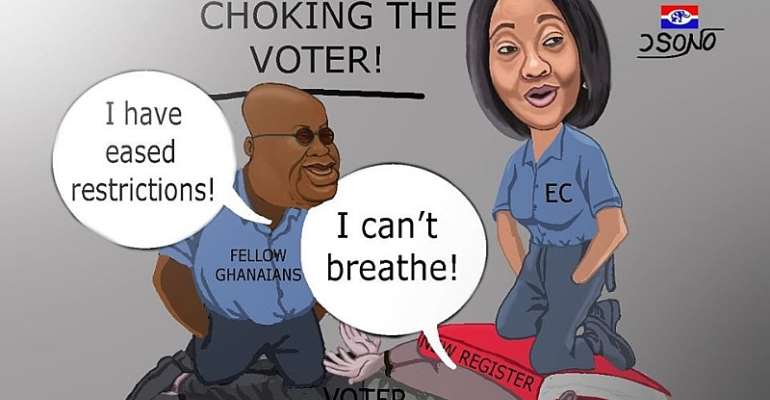 The Executive Director of the Alliance for Social Equity and Public Accountability (ASEPA), Mensah Thompson has questioned the audacity with which award-winning musician Michael Owusu Addo, popularly known as Sarkodie is asking Sammy Gyamfi to pull down his tweet on George Floyd.

Sammy Gyamfi, Communications Officer of the National Democratic Congress (NDC) in a post on his Facebook page uploaded a cartoon artwork depicting President Nana Addo and Electoral Commission Chair Jean-Mensah pinning down an individual described as the ‘Voter’ just like what led to the death of George Floyd in the United States of America.

Reacting to that artwork, Sarkodie lashed out at the NDC firebrand indicating that the post is wrong and should be pulled down.

“Naa my brother we all go wrong sometimes…I will believe your intention wasn’t to joke with this serious n very sensitive issues, but you still wrong just do what’s right…. Retract n take it down”.

Meanwhile, Sammy Gyamfi in defense of his post has explained that the cartoon doesn’t mock the painful xenophobic murder of George Floyd or seek to exploit same for political capital in any way but rather it is to stress on the evil attempt by the EC to disenfranchise millions of eligible voters through a xenophobic voter register.

Joining what appears to be a "dog fight", Ernest Thompson has questioned why the rapper has kept quiet on hardships and joblessness in the country although he was loud during the NDC administration.

The Executive Director further notes, “throughout this whole New Voters Register debate, we have not heard or seen you using your platform to promote peace and order in the build-up to the elections, it's as if you have not heard of the unbridled political tension brewing on mainstream and social media”.

Dear Sarkodie, there are so many things that is happening back home in Ghana that you have mysteriously kept mute about...

Unlike in 2014/2015 your bite on Politicians on issues affecting the lives of the people especially the youth has gotten dramatically cold even though the hardships and the joblessness which you were so passionate about then are even more evident than now than before.

Throughout this whole New Voters Register debate, we have not heard or seen you using your platform to promote peace and order in the build up to the elections, it's as if you have not heard of the unbridled political tension brewing on mainstream and social media.

Surprisingly you have surfaced at this time only to condemn an illustration of the injustice the Electoral Commission of Ghana wants to met out to millions of Ghanaians.

Isn't Mr. Sark not crying more than bereaved by ignoring the rights of his own Countrymen as if to say that the rights of Mr. Floyd is more important than that of millions of Ghanaians the E.C is seeking to disenfranchise?

I do not want to believe that this is anywhere close to the wishful thinking of brother Sark in condemning Mr.Sammy Gyamfi's post.

May my brother Sarkodie be reminded that his fan base transcend beyond Political Parties and unless he openly wants to admit that he cares less about those on the other side.