Tracking The Failed Promises Of The Akufo-Addo Government: The Case Of The 1million Dollar Per Constituency Promise By Hon. Muntaka Mubarak 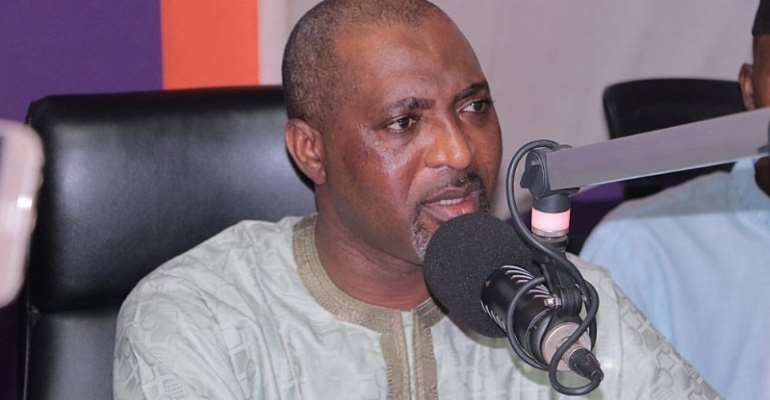 Tracking The Failed Promises Of The Akufo-Addo Government - The Case Of The One Million Dollars Per Constituency Promise- By Hon. Muntaka Mubarak, (Minority Chief Whip In Parliament) At The Maiden Edition Of The NDC's Weekly Press Briefing On Monday, 1st June, 2020.

Ladies and gentlemen of the press, you would recall that in the run-up to the 2016 elections, the Presidential candidate of the New Patriotic Party, Nana Addo Danquah Akufo-Addo made a plethora of lofty and mouthwatering promises that lured the Ghanaian electorate into voting for him.

However, since assuming office in 2017, he has flattered to deceive and failed to fulfill majority of the campaign promises he made to Ghanaians on the basis of which he was elected into office. Indeed, today, majority of Ghanaians have come to the painful realization, that most of the utopian promises of then Candidate Akufo-Addo were fake and never intended to be kept.

Today, we shall track the status of one of such “419” promises of President Akufo-Addo which has turned out to be a white elephant; the one million dollars per constituency per year promise.

Ladies and gentlemen, this promise of candidate Akufo-Addo was simply that, he was going to give every constituency an amount of $1 million every year for developmental projects if elected as President.

Many were those who believed this promise and voted for President Akufo-Addo in the 2016 general elections in the hope that their constituencies will benefit from at least US$4 million or projects equivalent to that amount under the government of Akufo-Addo.

Yet, nearly four (4) years after assuming the reins of power, and despite being the most resourced President in Ghana’s history, President Akufo Addo has very little to show for this key flagship promise in the 275 constituencies of Ghana.

Distinguished friends from the media, the facts show that:

Ladies and gentlemen, the facts show that save a handful of projects and initiatives such as toilets, warehouses, markets, mechanized water systems, ambulances etc. undertaken in a few constituencies in the country by the Ministry of Special Development Initiatives, the Akufo-Addo government once again failed to fulfill its one million dollars per constituency promise in the year 2018 and 2019.

In other words, not a single constituency in Ghana received cash of $1 million dollars or benefited from development projects equivalent to that amount in the year 2018 and 2019.

It is instructive to note, that per the one million dollar per constituency promise of President Akufo-Addo, each constituency should have received a total of $3 million dollars, which leads to a total of US$825 million by now (i.e excluding the year 2020), or benefited from development projects equivalent to that amount by now.

However, the total cost of the handful of development projects (CAPEX) which have been undertaken by the Ministry of Special Development Initiatives under the one million dollars per constituency promise from 2017-2019 is

GHS462,979,103, as per the Ministry’s own data submitted to the Parliament of Ghana as shown in the table below.

Source: 2020 Programme Based Budget of the Ministry of the Special Development Initiatives

The amount of GHS462, 979,103 which has so far been utilized for development projects (CAPEX) by the Ministry of Special Development Initiatives, is equivalent to just about US$81 million, constituting 9.8% of the total of US$825 million dollars which government was supposed to have released by now in fulfillment of the one million dollars per constituency promise.

It must be noted that this amount represents the total CAPEX releases from the Ministry of Special Development Initiatives from 2017-2019 and includes expenditure on 200 sub-standard dugouts in the northern part of the country under the One Village, One Adam (1V1D) initiative.

It is worthy of note, that the entire amount of $US81 million which has so far been spent on the one million dollars, per constituency promise, is far less than just what the Community Water and Sanitation Agency under the Ministry for Works and Housing did under the erstwhile NDC-Mahama regime.

Ladies and gentlemen of the press, it is sad to note, that even with the paltry US$81 million which has been utilized under the One Million Dollars per Constituency program so far, Members of Parliament have been completely sidelined in the choice and execution of development projects in their respective Constituencies and the disbursement of funds for same.

Even more bizarre, is the fact that the cost of most of the projects executed under the program have been deliberately inflated, as was discovered by the Minority Caucus in the year 2017, when the Ministry of Special Development Initiatives sought to use a whopping GHS800, 000 to develop a website.

Ladies and gentlemen of the press, the above facts show clearly that the one million dollars per constituency promise of President Akufo-Addo is largely unfulfilled and a monumental failure as only 9.8% of the promised US$825 million has been released between the periods of 2017-2019.

This fact which exposes the dishonesty of the Akufo-Addo government, applies to almost all the campaign promises of President Akufo-Addo and the NPP. We shall demonstrate this fact with indisputable evidence in our subsequent briefings.

Distinguished friends, talk they say is cheap. You can lie your way into power, but you cannot sustain yourself in office with lies. President Akufo-Addo has fallen on the dagger of his own utopian promises- promises which were calculated solely for votes but never intended to be kept. But the day of accountability is not far and we have no doubt in our minds that having fallen victim to his grand deceptions and fraud, Ghanaians will kick the insincere President Akufo-Addo out of office in the impending 2020 general elections, which really is going to be a referendum on his performance as President and vote for the humble, sincere and visionary John Dramani Mahama to rescue this country from the clutches of this inept, dishonest and corrupt Akufo-Addo government and restore our country back to the path of truth, development and true progress.

Thank you for your attention