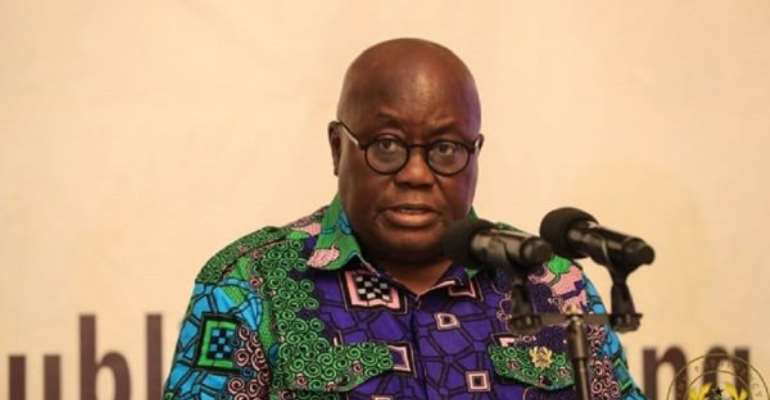 President Akufo-Addo has encouraged Ghanaians to adopt healthy lifestyles in order to win the battle against the Coronavirus pandemic.

He said in the Ghanaian context, it has been established that the case of comorbidity, that is, the underlying health conditions that were associated with almost all the COVID-19 deaths were mainly diabetes and hypertension.

The risk factors for these diseases, he said were, being overweight, eating refined foods, too much salt and sugar in meals, inadequate physical exercise, excessive alcohol intake and smoking.

“It is thus crucial that we improve our fitness levels and adopt healthy eating practices that incorporate our local food stuffs, which boost our immune systems,” he said.

He therefore urged persons with these Non-Communicable Diseases to take extra precautions, and take their treatment seriously.

President Akufo-Addo gave the advice on his 10th COVID-19 National Broadcast on Sunday, to give the situational update on the pandemic, and present a roadmap for a phased approach towards the gradual easing of the current restrictions.

He however commended Ghanaians for the support and commitment towards the fight against the spread of the virus, despite the harsh effects of the various restrictions on the socio-economic, religious and educational lives.

He said 13 persons were severely ill, with three others being in critical conditions, with one person on a ventilator, but a total of 5,087 other persons were responding to treatment at home, isolation centres and in hospitals.

President Akufo-Addo said “our hospitalization and death rates have been persistently very low, some of the lowest in Africa and in the world”.

He said Ghanaians were not dying of the virus in the hundreds and thousands that were earlier anticipated, and that which were being seen on a daily basis in some other countries.

“Indeed, we are witnessing a much milder manifestation of the virus in the country, than was initially anticipated,” he said.

He attributed the successes chalked to the timely measures taken by the government to halt the further spread of the virus, after the Ghana's first two positive cases of COVID-19 were announced on March 12.

He said government subsequently decided that it would limit and stop the importation of the virus, contain its spread, provide adequate care for the sick, limit the impact of the virus on social and economic life and use the opportunity afforded by the emergency to expand domestic capability and deepen the country's self-reliance.

He recounted Government actions to curtail the spread of the virus, which started on March 15, the Imposition of Restrictions, 2020 Act 1012; ban on public gatherings; and closed down of all schools and universities.

However in view of the obvious economic difficulties that the tough measures brought, the government also announced far-reaching reliefs to ease the economic and social burden on households and businesses.

The reliefs included subsidies on utilities for all, tax reliefs and financial packages for businesses and incentives for frontline health workers.

President Akufo-Addo said with the present status of the country, and for victory against the COVID-19 pandemic to be complete, Ghanaians must now more than ever adhere to the enhanced personal hygiene and social distancing protocols.

He said people must regularly wash their hands with soap under running water, or use alcohol-base hand sanitizers, refrain from shaking hands and mandatory wearing of face masks when going out to public places.

He called upon the Ministry of Information, the National Commission for Civic Education and the media to intensify public education of these protocols and directions.

President Akufo-Addo further entreated all religious, traditional, community and opinion leaders to continue to partner with government in engaging, mobilizing, and enforcing adherence to social distancing and personal hygiene practices in their respective communities.