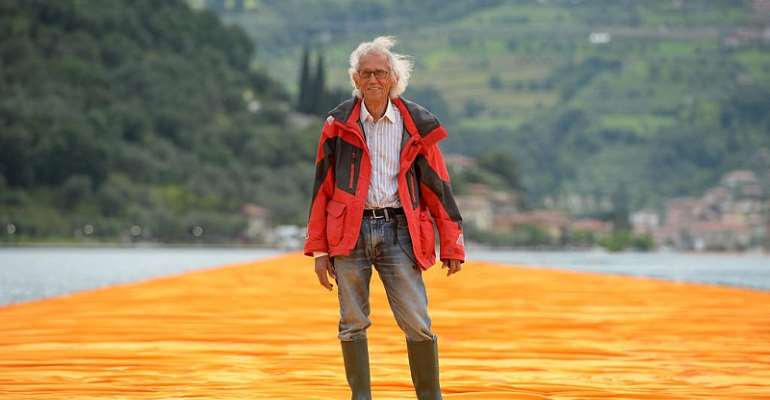 Christo, the artist who made his name wrapping monuments in cloth, has died at the age of 84. Along with wife Jeanne-Claude, he formed one of the highest-profile couples in contemporary art.

Christo died of natural causes at his home in New York City, his official Facebook page announced on Sunday.

Born on 13 June, 1935 in Gabrovo, Bulgaria, Christo Vladimirov Javacheff left his home country in 1957, living briefly in several countries before arriving in Paris, where he met his future wife, a fellow artist.

Since their meeting in Paris in 1958, Christo and Jeanne-Claude, born on the same day, 13 June, 1935, have always specified that they were co-authors of their works.

Their large-scale productions would take years of preparation and were costly to erect; but they were mostly ephemeral, coming down after just weeks or months.

"Christo and Jeanne-Claude's artwork brought people together in shared experiences across the globe, and their work lives on in our hearts and memories," said a statement from his office.

To finance their massive, ambitious projects and thus maintain their artistic freedom, the couple would sell their preparatory work, including collages and drawings, at exorbitant prices.

As well as the German Reichstag, another of their major projects was wrapping the Pont Neuf, Paris's oldest bridge, in 1985.

Christo worked in collaboration with his wife of 51 years Jeanne-Claude until her death in 2009.

In accordance with Christo's wishes, a work in progress, "L' Arc de Triomphe, Wrapped", would be completed.

The event is now scheduled to be shown from 18 September, 2021, having been postponed from this year because of the coronavirus pandemic.

Next year's work in Paris will be accompanied by an exhibition at the city's Pompidou Centre about their time in the city. That show is due to start in July this year, running until the end of October 2020.

The Pompidou Centre on Sunday paid tribute to the artist as an "enchanter" who was "essential to the history of art of our time".

"Christo was a great artist, capable of giving new depth to our everyday," said the Pompidou Centre's president, Serge Lasvignes.

The centre's director, Bernard Blistene, said they had worked "passionately" with Christo's team to put the exhibition together in parallel with the Arc de Triomphe project.

The exhibition will focus on the time Christo and his wife spent in Paris, 1958 to 1964, during which they developed their signature style.