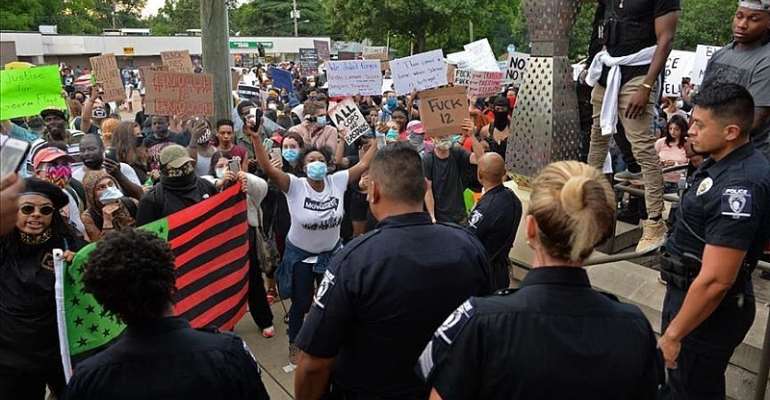 Protests continued to Saturday for a fifth straight day in parts of the US in response to the death of George Floyd, an unarmed black man who died after being pinned down by a former white police officer.

In the nation’s capital, the focal point was the vicinity of Lafayette Park across from the White House, where thousands of people, including whites and Muslims, gathered late Saturday.

Protestors chanted “I can’t breathe,” “Black Lives Matter,” and “No Justice, No Peace,” among others, for the second night in a row. Six arrests were made during protests Friday night, according to US Secret Service.

The DC National Guard stepped in to assist Park Police and Secret Service after more protestors flocked to the scene. Police used tear gas to push back protestors.

The first protests erupted after Floyd, 46, died after Derek Chauvin knelt on his neck during a fatal arrest in Minneapolis, Minnesota on Monday.

Chauvin, 44, was arrested Friday and charged with third-degree murder and second-degree manslaughter but that did not quell anger regarding police brutality and violence.

Three other police officers, who were involved in Floyd's death, whose last words were: “I can’t breathe,” were fired along with Chauvin but have not been charged.

Protesters are demanding the arrest of the other three officers and justice for Floyd as well as an end to police brutality against blacks.

National Guard soldiers have been activated in some states.

After protests in Texas, Governor Gregg Abbott activated the National Guard, saying in a statement “violence and looting will not be tolerated.”

In more than 30 cities including Los Angeles, Chicago, Atlanta and Seattle, authorities imposed curfews in hopes of quelling violent protests.

In New York City, protesters marched in Harlem and blocked traffic on the highway along Manhattan's East River, according to multiple reports.

In Nashville, police imposed a curfew Saturday after protests turned violent and City Hall was set on fire, according to a Tennessean news website.

Besides those that turned violent, there were peaceful protests. In Minneapolis, a group of demonstrators cleaned streets devastated by clashes between police and protestors.

Earlier in the day, Governor Tim Walz said the violent protests are “no longer” about Floyd and fully mobilized the state’s National Guard.

His decision came a day after protestors ignored a mandatory curfew in Minneapolis and St. Paul, that saw demonstrators clash with police and burned private property.

Separately, the mayors of the twin cities told reporters most of the violent protesters were not residents of Minneapolis and St. Paul.

“We’ve seen community institutions set on fire. And I want to be very, very clear. The people that are doing this are not Minneapolis residents,” Mayor Jacob Frey told a press briefing Saturday.

Trump said Floyd’s memory is being dishonored with rioters, looters and anarchists.

Speaking at Kennedy Space Center in Florida, he said: “What we are now seeing on the streets of our cities has nothing to do with justice or peace.”

Since Thursday, several stores in Minneapolis and Dallas were looted and arson have been reported.

Floyd’s death has strong parallels to that of Eric Garner, who died during a fatal 2014 arrest in New York, repeatedly pleading with officers, “I can’t breathe.”

The phrase became a rallying point for protesters demonstrating against the killings of unarmed black men and women by police. It has continued to resonate nearly six years later.