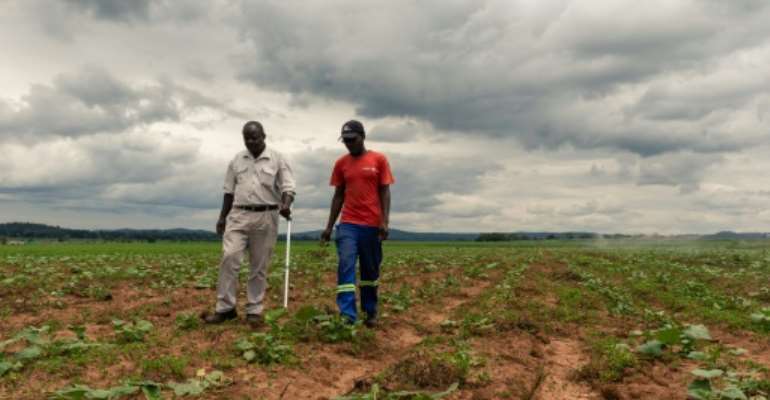 For Zimbabwean farmers like Benard Chinyemba (L), 60, a qualified mechanical engineer who was offered a farm during Zimbabwe's land reform, the programme is a success. By Jekesai NJIKIZANA (AFP)

Then she broke down and sobbed.

Her home is now a tiny one-bedroom cottage in a retirement home in the capital Harare, where she spends her time cross-stitching and reading.

"I am very happy here," she said after composing herself.

She was happier on the farm, where she spent her teen years riding horses.

"I am a country girl at heart."

Sixty-kilometres away in Glendale, Benard Chinyemba, 60, took over an 80-hectare farm in 2002, offered to him by the government as part of land redistribution to blacks. 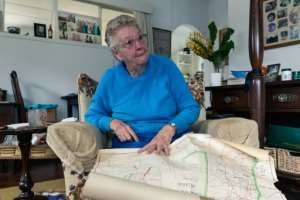 Isobel Simons, 80, points shows the boundaries of her former farm in Mvurwi, which was repossessed during Zimbabwe's land reform. By Jekesai NJIKIZANA (AFP)

The ex-engineer is thriving, growing maize and soya beans, while rearing goats, sheep, fish and chickens.

"There was no real farming going on here," Chinyemba told AFP sitting on a garden chair on a well-manicured lawn.

"We renovated the house when we moved in," he said.

Twenty years after Zimbabwe's land reform began, the cases of Simons and Chinyemba illustrate the deep lingering divisions over what became a symbol of Mugabe, who ruled for 37 years until he was toppled in 2017. He died two years later.

He justified the land grabs as a way to correct historical wrongs by claiming back land that was forcibly taken from the blacks.

Critics blame the land programme for wreaking havoc on the agriculture sector -- a mainstay of the economy. 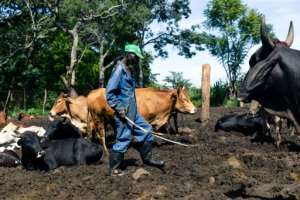 Mugabe justified the land grabs as a way to correct historical wrongs by claiming back land that was forcibly taken from the blacks. By Jekesai NJIKIZANA (AFP)

Economic output fell by half following the land seizures and the economy has been hobbled since -- shrinking 7.5 percent last year, according to the International Monetary Fund.

Finance Minister Mthuli Ncube in a letter to the IMF in April, projected the economy could contract by between 15 and 20 percent, partly due to the coronavirus pandemic.

Food shortages experienced over most of the post-land reform years are widely blamed on the loss of white farmers.

The coronavirus pandemic has only worsened the shortages. 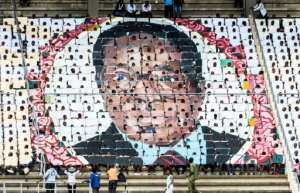 Mugabe made the land reform a key part of his rule for nearly four decades. By Jekesai NJIKIZANA (AFP)

According to the World Food Programme, 56 of the country's 60 districts are experiencing "crisis" hunger and the virus pandemic risks driving people into "deeper desperation".

President Emmerson Mnangagwa has promised to import food to feed them "so that no one will starve".

For Chinyemba, the government was right "repossessing" land from the whites, but they deserve compensation, if only for improvements.

"I don't feel any remorse at all. The land belongs to the indigenous people. If the whites want to farm, they should do so on our terms."

He said while black "people were killed," when their land was taken from them, but "in all fairness, (whites) should get compensation" for improvements.

For white Zimbabweans, the programme was an invasion of their property. To the blacks, it was the final battle in the country's liberation since they first rose against British colonialists in the 19th century.

The land issue almost derailed the negotiations with Britain that led to the birth of Zimbabwe in 1980.

Ultimately a deal was struck that the new government would not embark on any land reforms in the first decade in power. 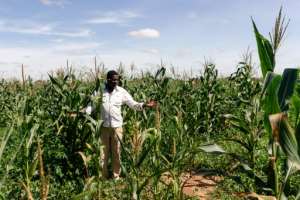 After that, a "willing buyer, willing seller" principle came into effect with Britain to fund the buying of white-owned farms.

But in 1997, Clare Short, then British Secretary of State for International Development told Harare that London had "no special responsibility to meet the cost of land purchases."

Sporadic invasions of white-owned farms ensued, but the government curbed them, with Mugabe assuring white farmers that "squatting" would not be tolerated.

Simons said white farmers deluded themselves into thinking they were untouchable and indispensable "royal game" because agriculture was key to the economy.

All that changed when in February 2000 after a constitutional referendum with a clause that would legalise expropriation of white farms without compensation, was rejected.

A year later, the government formalised the reform programme. Farms were either sub-divided into six-hectare plots or handed out whole to blacks.

Thirty kilometres west of Harare, 60-year-old Israel Pasipanodya Mushore inherited Rasper farm. But it has not been easy work.

In contrast to Chinyemba's, his farm is rundown. What used to be a swimming pool is now a fishpond.

Weeds choked the maize crop. His showpiece is a herd of 70-plus cattle.

In 2016 government introduced the "command agriculture" scheme to supply farmers with so-called inputs -- seeds, fertilisers and insecticides -- and they pay back on harvesting.

The scheme brought hope, but not enough.

"Equipment and inputs are our biggest challenge; we have no draught power," Mushore said. 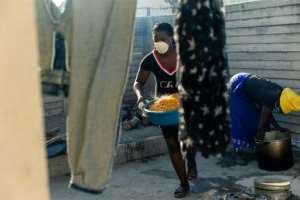 The pandemic has only worsened food shortages caused by economic and agricultural crisis. By Jekesai NJIKIZANA (AFP)

Inputs were not timely disbursed to farmers, or just didn't get to them.

Funding remains one of the biggest challenges.

Currently all land belongs to the state and farms operate on 99-year leases.

Financial institutions refuse to lend in the absence of collateral.

"The 99-year lease on its own, in its current form has not inspired confidence to the financiers," said Paul Zakariya, who heads the Zimbabwe Farmers Union, which represents over a million small-scale farmers.

"If the farmers were on the land with title or some bankable entity that is truly tradable and can be honoured by the banks, government wouldn't have to fulfil the role," said Gilpin, who is the director of the Commercial Farmers Union, which represents mostly white farmers.

Zimbabwe's government insists it will only pay compensation for improvements on the farms that were taken and for not the land. 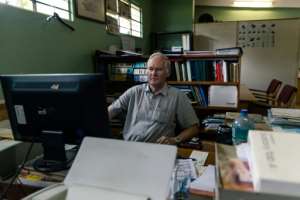 Now wheel-chair bound and a double amputee, Laurie is one of the farmers' representatives negotiating compensation with the government.

"We hope to have an agreement on a global figure for the immovable assets shortly," he said.

The government has made "interim relief" payments to especially old and destitute farmers.

But 20 years on, the land reforms remain a work in progress.

After carrying out a land audit, government vowed to slash the size of under-utilised large farms and tackle multiple farm ownership.

Opinions on the reforms remain split. But even those who lost farms agree the situation where white farmers occupied the best agricultural land while millions of black Zimbabweans were cramped on semi-arid land, was untenable.

Economically though, the reforms are widely seen as a failure.

Independent economist Tony Hawkins, said agriculture's share of GDP has fallen from about 15 percent to less than 10 per cent.

Despite several attempts, AFP failed to obtain a government response.

But for the Zimbabwean leadership, Mugabe's farming legacy continues to empower blacks.

"Our land reform programme remains a fundamental cog to our independence and sovereignty," Mnangagwa said during independence celebrations in April.

"To this, there is no wavering or going back."

Don't Expect Me To Accept Results Of A Flawed Election, I Wo...
11 minutes ago

If There's Any President And Gov't Who Is Sakawa, It's Maham...
19 minutes ago