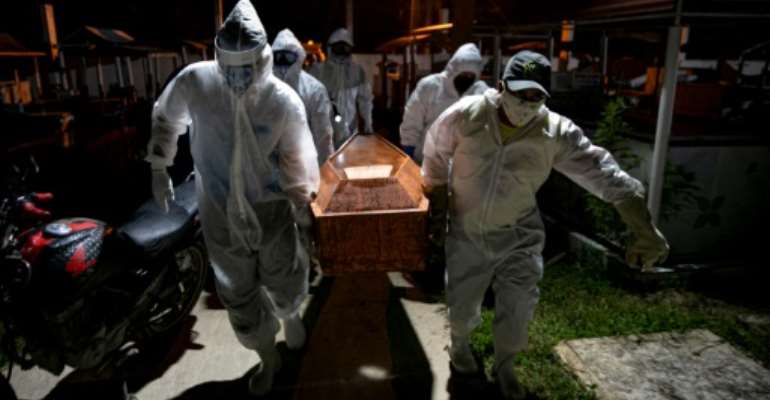 A coffin in Brazil, which has now passed France to have the world's fourth-highest death toll. By Tarso SARRAF (AFP)

The number of coronavirus cases worldwide has topped six million as the disease spread rapidly across Latin America and political leaders feuded over how to deal with the pandemic.

Much of the world is moving at varying speeds to lift lockdowns that have wrecked economies and stripped millions of their jobs while Muslims in Jerusalem and other cities flocked to newly reopened mosques on Sunday.

But in Brazil -- the epicenter of South America's outbreak with nearly 500,000 confirmed cases, lagging only behind the US -- disagreement among its leaders over lockdown measures has hampered efforts to slow the outbreak.

President Jair Bolsonaro, who says the economic fallout from stay-at-home orders will be worse than the virus, has berated governors and mayors for imposing what he calls "the tyranny of total quarantine." 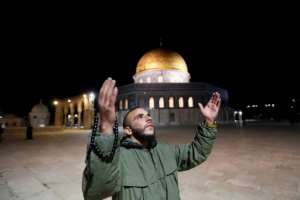 A man prays in front of the Dome of the Rock at the Al-Aqsa mosque compound, which reopened on Sunday. By Ahmad GHARABLI (AFP)

Even as his country surpassed France to have the world's fourth-highest toll with nearly 30,000 deaths, the rightwing populist called for Brazil's football season to resume.

In neighbouring Bolivia, the government is set to lift containment measures on Monday, but four of the country's nine regions -- including hardest-hit Santa Cruz de la Sierra -- said they would defy the order and extend the restrictions.

Pope Francis prayed for the Amazon's "particularly vulnerable" indigenous people on Sunday in his first address to the faithful on Saint Peter's square in nearly three months. 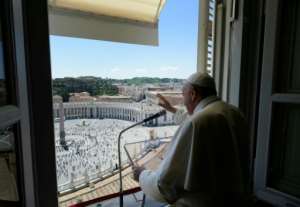 The pope earlier said that "everything will be different" after the pandemic, which has killed nearly 370,000 people.

"From the great trials of humanity -- among them this pandemic -- one emerges better or worse. You don't emerge the same."

But the disputes that have long dominated the world continued to rear their heads over the weekend.

The opening of Jerusalem's Al-Aqsa mosque compound on Sunday was marred by rising Israeli-Palestinian tensions.

Israeli soldiers were stationed at the gates of Islam's third holiest site hours after an Israeli police officer shot dead a disabled Palestinian man in nearby annexed east Jerusalem. 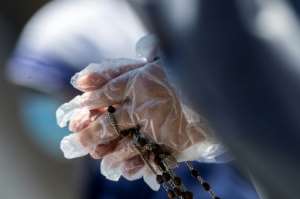 Trump accused the WHO of not doing enough to curb the early spread of the virus and being too lenient with China, where the disease emerged late last year.

It is a major blow for the UN's health agency -- the US is by far its biggest contributor -- and the European Union urged Trump to reconsider, calling for international solidarity.

And the crisis has further deepened inequality, cleaving the world's workforce in two: those who have the ability to work from home, and those who do not.

Motorcycle taxi driver Thanapat Noidee, who shares a tiny hut in Bangkok with his wife and children, said his normal income of $31 a day has been halved.

"Without food donations, I'll have to fight harder for my family to survive," Thanapat said as Thailand's parliament approved a record near-$60 billion economic stimulus. 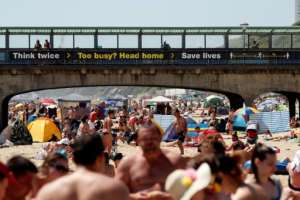 A busy beach in Bournemouth, Britain, where government advisors have warned the country's lockdown was being lifted too quickly. By Adrian DENNIS (AFP)

In countries where the virus seems to have abated, there has been pressure to ease restrictions, despite the lack of a vaccine and experts warning of a possible second wave of infections.

In Britain, which recorded 960 new deaths on Saturday ahead of starting to lift its lockdown on Monday, senior advisors to the government warned that it was moving too quickly. 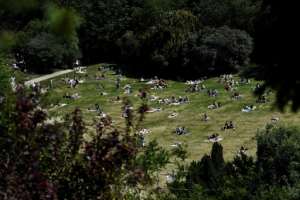 People enjoy the sun in Paris's Parc des Buttes Chaumont, as the French capital reopens it parks and gardens. By ALAIN JOCARD (AFP)

In Paris, parks opened on the weekend for the first time in months, ahead of restaurants, cafes and bars reopening on sidewalks and terraces on Tuesday.

Spain's minority government said it would seek a final two-week extension for its lockdown, but it will need parliament's support.

India announced it would begin relaxing the world's biggest lockdown in stages from early June, even as it marked another record daily rise in infections.

Bangladesh lifted its lockdown on Sunday, with millions heading back to work in densely populated cities even as the country logged record spikes in new deaths and infections.

"I tried to avoid crowds when I walked to my office. But social distancing is impossible in Dhaka's footpaths," banker Badrul Islam told AFP.

In the United States, Washington DC and Los Angeles resumed outdoor dining, while New York City is on track to begin reopening from the week of June 8.

After largely lifting its restrictions, Iran passed the grim milestone of 150,000 virus deaths on Sunday, as the Middle East's hardest-hit country struggles to contain a recent upward trend. 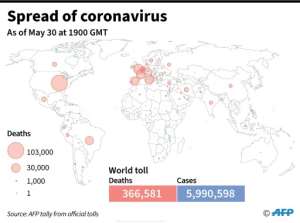 A world map showing the official number of coronavirus deaths per country. By Simon MALFATTO (AFP)

The economic damage continues to pile up, with India, Canada, Brazil, France and Italy registering shrinking GDP figures in the first quarter ahead of an expected worldwide recession.

The downturn has decimated the aviation industry, and Emirates Airline said Sunday it would cut "a few" jobs, an ominous statement from the Middle East's largest carrier which employs around 100,000 people.

The world's faithful have been slowly re-congregating as countries such as Iran and Turkey have allowed collective prayers to resume in mosques.

In Saudi Arabia, mask-clad worshippers on Sunday thronged to mosques that opened nationwide -- except in the holy city of Mecca.

"I prayed, praise be to God, in the neighbourhood mosque... and it was a beautiful feeling," said one worshipper.

"But I swear to God that some people do not care about anything. No face mask. No rug."