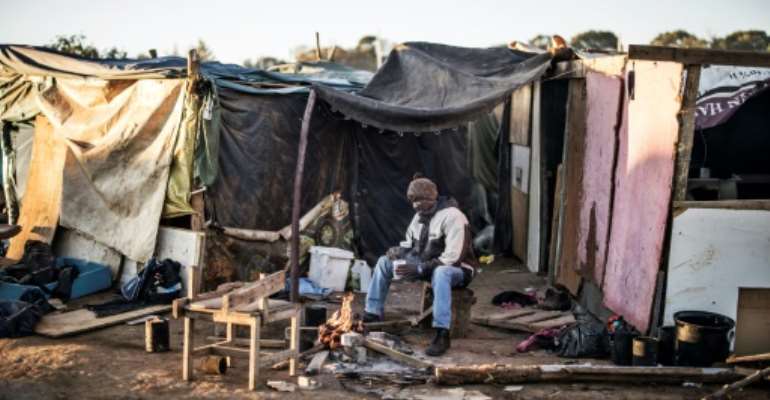 South Africa had already slipped into recession in the final quarter of 2019 before the virus arrived. By MARCO LONGARI (AFP/File)

Admired by some but berated by others for imposing a tight lockdown, South African President Cyril Ramaphosa faces a fresh leadership test over his handling of the coronavirus outbreak.

Africa's most industrialised nation is preparing to reopen its economy on Monday as it moves into level three of a five-tier lockdown, in force since March 27, sowing bitter divisions.

South Africa had already slipped into recession in the final quarter of 2019 before the virus arrived in March.

The rand meanwhile has depreciated by 22.9 percent since January. Unemployment is very high and so is poverty.

"Initially there was such a big support for this thing," political analyst Ralph Mathekga told AFP, referring to the shutdown.

"But government allowed that goodwill to erode... it began to struggle with the problem of legitimacy when people became irritated with the lockdown measures."

Under level three, all but high-risk sectors of the economy will be allowed to reopen, as will schools and places of worship.

Liquor sales will resume, but for home consumption only.

"The president is going to level 3 because he is buckling under pressure from all fronts," Mathekga said. 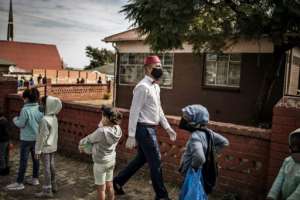 South Africans are bitterly divided over the lockdown. By MARCO LONGARI (AFP/File)

The main opposition Democratic Alliance (DA) party has welcomed the move but said it came "too late for millions of South Africans who have already paid heavily for (the) government's dithering".

"This lockdown is costing our economy around 13 billion rand ($742 million) a day," said DA leader John Steenhuisen. "The president must end it tomorrow."

The head of the left-wing Economic Freedom Fighters (EFF) party Julius Malema opposed the easing of lockdown and said Ramaphosa had effectively resigned as "the captain of the ship".

"Our grandmothers are going to die in the same way grandmothers died in Italy," Malema warned, referring to the reopening of churches.

South Africa has recorded nearly 31,000 coronavirus cases so far, including at least 643 deaths.

Just two years after winning the presidency by pledging to revive the economy, Ramaphosa has been forced to strike a balance between maintaining public health and ensuring economic recovery. 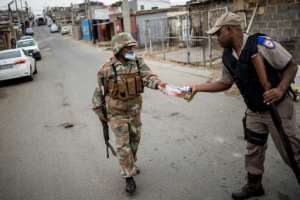 A South African soldier (left) hands over cigarettes he seized from a small shop to a policeman. The tobacco ban is still in force. By Michele Spatari (AFP/File)

"There are businesses that are going to close and not come back," Sifiso Skenjana, chief economist at management consulting firm IQ Business told AFP.

Despite an unprecedented $26 billion virus relief package and food parcels, many South Africans have struggled to get by.

The National Treasury has warned that more than 2.5 million jobs could be cut as a result of the pandemic, with wages and salaries expected to fall by as much as 30 percent.

Mathekga said Ramaphosa was walking a tightrope even within the ruling African National Congress, where he was not greatly popular.

"If he fails business, the black middle class and the poor, he will only have one place to count on, that is the ANC, where they never liked him anyway."

"He locked us down very early in the process... that has saved a lot of lives," she said.

Ramaphosa, a former unionist and businessman, has conceded that the government made some mistakes in its COVID-19 response.

"Some of the actions we have taken have been unclear, some have been contradictory and some have been poorly explained," he said in a recent address to the nation, noting the "anger" the lockdown had caused.

Ramaphosa even took it on the chin when he clumsily fumbled with his face mask during a televised speech, fuelling a frenzy of social media jokes. 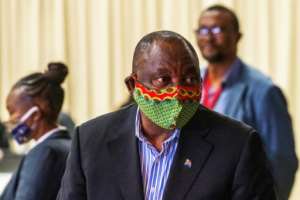 Ramaphosa was mocked on social media for fumbling while putting on a face mask. By Jerome Delay (POOL/AFP/File)

As South Africans made fun of their leader using the hashtags #facemaskchallenge and #CyrilMaskChallenge, Ramaphosa seized the moment to lighten the mood.

"I am going to open a TV channel where I will teach people how to put on a mask," he told reporters after the incident. "You can enrol."

Gouws said Ramaphosa was someone who "likes to work with consensus" and was a "strategist".

But an ongoing ban on cigarette sales remains a thorny issue with social workers and tobacco companies up in arms as an illicit cigarette market blossoms.

According to BATSA, the South African treasury is losing 35 million rand ($2 million) in excise taxes per day as a result.