We Deserve A Hospital — Chiraa Residents 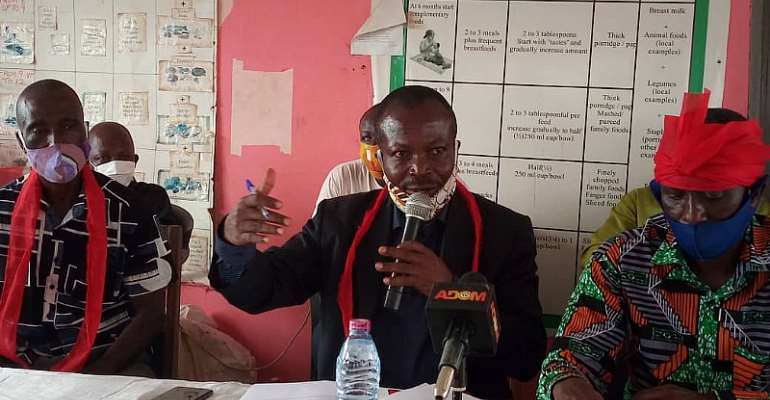 The Sunyani West Municipality is among the areas in the Bono Region which will have a new District Hospital as part of the 88 new district hospitals to be constructed in some Districts by government beginning July.

The chiefs and people of Chiraa near Sunyani in the Bono Region are calling for the siting of the proposed District Hospital in the Sunyani West town owing to its strategic location, among several other factors.

Addressing a Press Conference organized by the Chiraa Youth Forum at Chiraa, a Spokesperson for the town, Joseph Opoku Kyeremeh said the Traditional Council through the Town Development Committee has already petitioned the Ministry of Health for Chiraa to be considered for the facility.

“…by virtue of its location, on the main Sunyani-Techiman-Wenchi highway, which is one of the major accident prone stretches in the region, and giving the increasing vehicular movements, Chiraa would be a strategic location for emergencies like road accidents to augment the efforts of the Sunyani Regional hospital and the Holy Family Hospital in Techiman…”, Mr. Opoku Kyeremeh explained at the Press Conference.

He further argued that per the geographic location of Chiraa, people from neighbouring districts and municipalities in Tano North in Ahafo Region, Offinso North in Ashanti, Techiman North in Bono East and some communities along the main Chiraa-Wenchi road access health services from the Chiraa Health Centre.

“Again, our sister towns like Fiapre, Odumase and Kwatire are almost merging into Sunyani and the residents of the three towns can conveniently access the health needs from the Sunyani Regional Hospital, the Sunyani Municipal Hospital and the SDA Hospital” but the same cannot be said about Chiraa.

Mr. Opoku Kyeremeh further stated that one other major reason why Chiraa deserves the proposed hospital is that “the town has not been fairly treated in terms of the distribution of the government departments and structures” as agreed upon by in 2007 when the district was being created.

He said Chiraa till date cannot boast of a single decentralized department being located in the town as they are all concentrated at Odomase, the district capital and Nsoatre.

On revenue mobilization, Mr. Opoku Kyeremeh pointed out that Chiraa has been generating much more revenue for Sunyani West Municipal Assembly in the last five years due to the numerous economic activities, including the biggest weekly market in the municipality.

Chiraa is one of the oldest communities in the Bono region and forms part of the Dormaa Traditional Area. In their quest to facilitate the upgrade of the Chiraa Health Centre into a hospital, the people of the area have over years added several amenities to widen the scope of health delivery at the facility.

The community has renovated existing nurses’ quarters and also upgraded a bungalow into a doctors’ bungalow. Apart from this, two new doctors’ bungalows have been constructed by two individuals from the area. An Out Patient Department for the Health Centre is also under construction by the Chiraa Development Committee. Another native from the town has donated an Ambulance to the facility, constructed and commissioned a theater for use by the Health Centre.