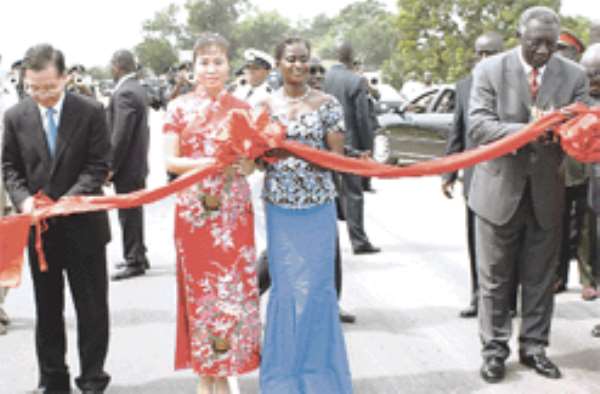 President J.A. Kufuor and the Premier of the State Council of the People's Republic of China, Mr Wen Jiabao, yesterday inaugurated the Ofankor-Nsawam dual carriageway.

The 17.4 kilometre road forms part of the 250-kilometre Accra-Kumasi Road and was financed with an interest-free loan facility of $28 million from the government of the People's Republic of China.

The project, which was implemented by the Chinese Railway Engineering Corporation, started in June 2004 and was completed in April this year, two months ahead of schedule.

Speaking during the inauguration, President Kufuor said “the completion of this segment should urge us on to our goal of a dual carriageway all the way to Kumasi”.

He described the road as the busiest highway in Ghana, widely used by neighbouring landlocked countries of Burkina Faso, Mali and Niger.

President Kufuor said the speed with which the contractors had executed the project and the high quality of work convinced the government that they should remain and be supported to contribute to the completion of the dualisation of the entire road.

He appealed to the Chinese Premier to empower the company to remain competitive for contracts in Ghana.
President Kufuor recalled that there were many Chinese firms engaged in various construction works on roads, sports stadia, housing, storm drains and offices, adding, “In all these projects, there is so much quality performance.”

He said the success of such companies would be mutually beneficial to Ghana and China. Premier Wen said China would work hand in hand with Ghana for the benefit of the two countries.

He hailed the fruitful co-operation between the two countries and gave the assurance that they would continue to work closely to achieve common progress.

Premier Wen, who is on an eight-day tour of seven African countries, has since left Ghana.

The Minister of Transportation, Dr Richard W. Anane, said with the completion of the road project, travelling between Accra and Nsawam and beyond had become smoother, safer and more convenient than before and urged drivers to comply with the speed limit.

A communiqué issued after the two-day visit of the Chinese Premier said China would continue to provide assistance for Ghana's economic and social development.

It said the Chinese side was ready to continue discussions on the Bui Dam project and find acceptable ways by which there would be a win-win situation for both sides.

The communiqué said Ghana and China had agreed to enhance exchange and co-operation in health, culture and tourism while China would continue to provide scholarships and opportunities for professional training for Ghanaians.

According to the communiqué, China formally extended to Ghana the status of an approved destination for Chinese tour groups.

It said Ghana and China decided to strengthen co-operation in international affairs and, where necessary, to maintain consultation and coronation, regular or otherwise, on major international issues such as poverty reduction, debt relief, UN reform, human rights and counter-terrorism to jointly safeguard the rights and interests of developing countries, as well as promote world peace and development.

The communiqué said the two countries committed themselves to the building of a new type of China-Africa strategic partnership featuring political equality and mutual trust, economic win-win co-operation and cultural exchange.

It said Premier Wen extended an invitation from the Chinese President, Hue Jintao, to President Kufuor to attend the Beijing Summit of the Forum on China-Africa Cooperation.