Editorial: The Rains Are Here Again 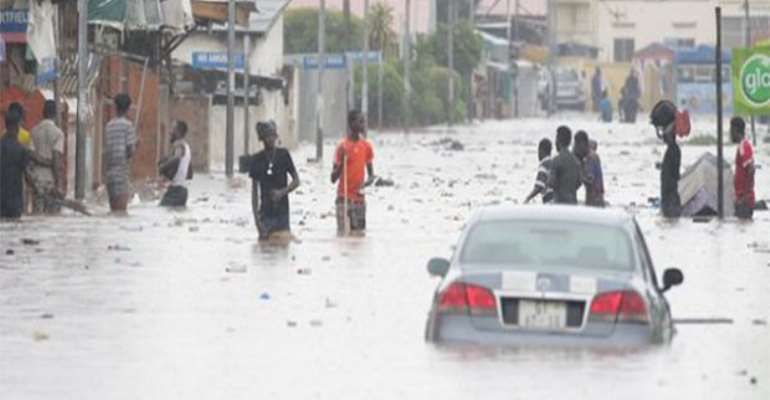 The rainy season is here, a time of the year when some residents of Accra sit on tenterhooks because of the perennial floods they endure.

For those who do not suffer directly because of their locations, the motorists among them will nonetheless encounter the inconveniences of flooding on some roads in the city in their daily commuting.

The question that should be posed at this time is whether or not both residents and the authorities are primed for the season?

With the challenges of not knowing what the season holds in terms of weather clemency, we can only look on helplessly and hope that what has been done so far by way of desilting would offer sufficient protection when the elements get rough.

We recall the Works and Housing Minister's expression of worry about how residents must join hands with the authorities in managing environmental sanity in the city.

He and others, such as the mayor of Accra, were in a part of Accra to do a symbolic drainage desilting to flag off the pre-rainy season preparation in the city.

Although there has been desilting activities in the city prior to the onset of the season, we are nonetheless uncomfortable as the rains arrive.

The fundamental challenges of proper planning and enforcement of existing by-laws are still nowhere near being addressed. The minister made an important point during his remarks when he said that those who do not ensure that their environments are well maintained would suffer the consequences in the form of floods persistently harassing them, as well as mosquitoes finding congenial places to breed.

The mayor of Accra warned during the exercise that the city authorities would enforce the appropriate by-laws to compel residents to be environmentally decent. Such warnings are hardly implemented in this country.

Many years after the worst rainy season disaster was recorded in Accra, the recommendations decided upon during the probe into the havoc have become archival stuff resting on shelves in some government departments.

We appreciate the place of the human face in such matters, but the consequences of environmental recklessness outweigh the interests of individuals who do not understand the effects of their collective impudence.

Construction of structures on waterways – the source of most of the flooding we encounter at this time of the year – has not stopped, and those engaged in the breaches have not suffered any formal consequences of their lawlessness.

At this time of the year, the engineering deficiencies of road construction in some parts of the city become visible. Some parts of the city's roads have become notorious for trapping rainwater in large volumes when it rains and, of course, impeding vehicular traffic.

The part of the dual carriageway around Regency Hotel, as one drives towards the Association International School under the railway overpass, is notorious for such inconveniences when it rains. What is responsible for the floods at this location has not yet received attention.

The mega-project announced a few years ago to contain the perennial flooding is our best bet coupled with a reactivation of dormant by-laws.

The EC Of Ghana Will Not Joke With The Faith Of Ghanaians. W...
15 minutes ago