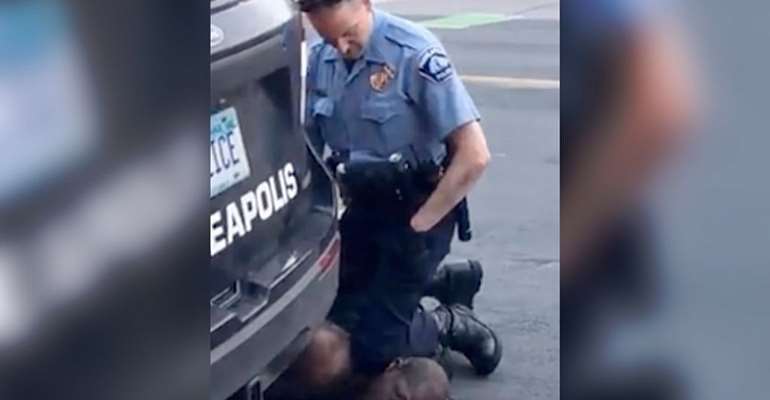 American singer and businesswoman, Rihanna, has expressed sadness over the gruesome murder of an unarmed Blackman, George Floyd.

Floyd was killed on Monday, May 25, 2020 by a former white police officer of Minneapolis named Derek Michael Chauvin.

Mr Chauvin, who knelt on the neck of George Floyd, leading to his death, has since been charged with murder.

US prosecutors have charged him with 3rd-degree murder and 2nd-degree manslaughter, and according to the complaint he created “an unreasonable risk and taking a chance of causing death or great bodily harm to George Floyd.”

The D.A. announced the charges Friday and said Chauvin is in custody, but the other three officers are still under investigation and no charges have been filed … at least not yet.

Reports indicate that an officer approached George Floyd’s car and ordered him out at gunpoint, claiming he passed counterfeit currency.

Once Floyd put his hands on the steering wheel, the cop holstered his gun, reports say.

The complaint document noted that George “actively resisted being handcuffed.”

Once in cuffs, however, he became compliant, according to the complaint document.

The complaint is based, in part, on the various body cam videos the D.A. reviewed. Cops told George he was being arrested for passing bogus money, and then walked him across the street to a squad car, where George “stiffened up, fell to the ground, and told the officers he was claustrophobic.”

While standing outside the car, George repeatedly said he could not breathe. This is before Chauvin put his knee on George’s neck.

At 8:19 pm, Chauvin pulled George out of the squad car and Floyd went to the ground, handcuffed. There are two other officers on George’s back and legs — you can’t see them in the video, but this is the moment when Chauvin placed his left knee on George’s neck, reports say.

There have been unrests across the US over the killing, with the Minneapolis building being set on fire. Over 40 people including a CNN reporter were arrested in New York during protests over the killing.

In a tweet on Saturday, May 30, 2020, Rihanna says she has been devastated by the death of George.

For the last few days, the magnitude of devastation, anger, sadness I've felt has been overwhelming to say the least! Watching my people get murdered and lynched day after day pushed me to a heavy place in my heart! To the point of staying away from socials, just to avoid hearing the blood curdling agony in George Floyd's voice again, begging over and over for his life!!! The look of enticement, the pure joy and climax on the face of this bigot, murderer, thug, pig, bum, Derek Chauvin, haunts me!! I can't shake this! I can't get over an ambulance pulling up to an arrest, a paramedic checking a pulse without removing the very thing that's hindering it! Is this that fucking normal??? If intentional MURDER is the fit consequence for “drugs” or “resisting arrest”….then what's the fit consequence for MURDER???! #GeorgeFloyd #AhmaudArbery #BreonnaTaylor