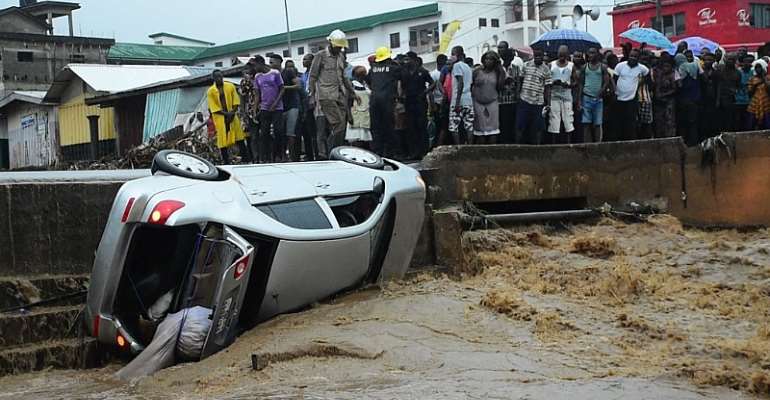 The Volta Regional Capital, Ho is gradually becoming a flood-prone area as about 11 places have been identified to be dangerous spots in the hitherto flood-free municipality.

The discoveries were made last Friday, May 29, 2020, after four persons escaped death when floodwater washed them and the vehicle in which they were commuting into a storm drain at one of the identified flood-prone spots.

The four, a driver and three passengers, were driving in a Toyota Corolla Hiring saloon vehicle with registration number GM 4688-14.

On reaching Ho from Hohoe, on Thursday, May 28, 2020 at about 3:30 pm the heavy rains which had begun about an hour earlier was still pouring.

On reaching the bridge near Amegashie House, about 500 matters from the main lorry station, the vehicle and its occupants were washed into the storm drain.

Eyewitnesses say the driver had ignored the danger posed by the running water and attempted to drive through it.

The vehicle landed on its side in the storm drain.

Residents rushed to evacuate the victims all of whom did not have any severe injuries. The team from the Ambulance Service and the Ghana Fire Service responded swiftly and conveyed the accident victims to the Ho Teaching Hospital while the vehicle was removed from the drain.

A resident of the area, Esinam Azialey said the section always floods whenever it rains, adding that it becomes more dangerous when it is a heavy rain.

Consequently, several people have become victims of the section, to the extent of some losing their lives.

The residents have since appealed to the Municipal Assembly to as a matter of urgency reconstruct that section of the road since, “The road here is not wide enough.

The culvert gets flooded anytime it rains because it is choked with debris.”

The Ho Municipal Chief Executive (MCE), Prosper Bansa who visited the scene promised that swift action will be taken to ameliorate the situation.

In a related development the Volta Regional Minister, Dr Archibald Letsa and his Deputy, Rev. Johnson Avuletey have toured some of the flood-prone areas in the municipality following the floods caused by heavy rains.

The team which included officials of the National Disaster Management Organisation (NADMO) and the various road sector departments in the region, visited 11 spots including the Amegashie House Bridge where four persons' escapade death last Thursday, May 28, 2020.

The other places visited include, the Barracks road, C.K road, BNI-Powerhouse road, YMCA Bridge on the Civic Centre road and Rabazey area.

The others include, Tsikpota, the Asogli (Togbe Afede) Palace Square drainage and bridge, Redeem-Down area, Trafalgar Down on the Ho-Aflao Highway and Bulawayo Bridge near the Ho Technical University junction.

The Minister observed that the havoc wreaked on bridges and roads in the regional capital by last Thursday's heavy rains required urgent attention as it was evident that most of the drainage systems were too small to accommodate large volumes of rushing water.

He noted that these drainage systems needed to be re-engineered and expanded to prevent any disaster in the future.

Secondly choked drains must be immediately deleted and in some cases to allow free flow of water.

Dr Letsa further directed that the necessary processes required to reconstruct and realign some selected bridges must be initiated immediately in order to prevent the drains from collapsing or overflowing their banks in the future.

High Court shoot down Agordzo's application to travel
39 minutes ago

ASEPA to file RTI request for minutes of Justice Dotse-AG 'S...
39 minutes ago