On Snails, Frogs, And The Messiah 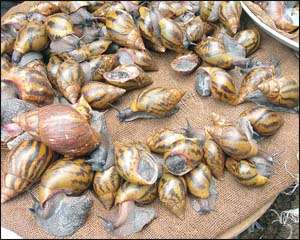 One man's snail is another man's frog—that is the conclusion I had to reach after watching a foreigner grimace upon hearing some people ate snails, “Frogs make sense to me, but snails—that's disgusting!” As a snail lover perhaps, you must find this ridiculous—the thought of those croaking slimy amphibians being thought of by some, a delicacy; and snails, obnoxious—well they are also slimy… and disgusting, but that never stops me from eating them.

China is finally taking cogent legislative steps towards outlawing the trade in wildlife and endangered species. Many of us are as excited about this as we would be about the announcement of a vaccine/antiviral drug. Because China, the most populous nation, is also the world's biggest consumer and trader in wildlife.

More than 60% of diseases caused humans are animal-to-human transmissions, and about three-quarters of these transmissions are caught from wildlife. Ours, now, is a world plagued by one of such diseases. Hence the call for immediate action: 'end the wildlife trade now.' Now!—not within the shortest possible time.

But the way things are going… we may have to ease up on the 'now' and stick with 'within the shortest possible time' or perhaps, once again resort to 'never'

Wild animals are as indigenous to the Chinese as akple is to the__; and fufu to the__ (fill the gaps). These animals serve a variety of purposes: from food, medicinal, through to ornamental (after all, wouldn't displaying animal spoils in one's living room come in handy for, say, intimidating prospective in-laws?).

These wild animals ranging from tigers, leopards, rhinos, elephants, pangolins, koalas, bears, boars, bats, etc., are hunted down and slaughtered for their meat, skin, horns, tusks, et al, just as readily and regularly as chicken, cows, goats, etc. are slaughtered in most parts of the world. Tigers are staple foods; their bones make for good wine and potent traditional medicines; their pelts, used for luxurious rugs, clothing; their penises for aphrodisiacs (the irony).

Prior to the COVID-19 outbreak, the wildlife trade was not illegal—arguably, they still aren't. China's Wildlife Protection Law does not stay true to its name; it gives its blessing to the trade, and attempts to regulate it. The law treats the trade as a fact of life (Chinese life), with defenders insisting that outlawing the trade will only drive it underground, all the while giving boost to it. This is arguable. There is a good reason for the human race making illegal certain activities. Without the law against murder, murdering one another for misdoings would be a household activity. Even with our moral/religious beliefs, we would soon put knives through each other's chests, with little to no scruples.

This flaw in the Wildlife Protection Law is worth mentioning because the policies announced by the Chinese government on January 26, February 24, and April 8, 2020—intended to culminate in the outlaw of the wildlife trade—all seem to be trimming leaves, leaving the root untouched.

On January 26, a temporary ban on the trade was announced, 'until when the epidemic situation is resolved.' Days after this announcement, wild traders had their wares shrouded by tents, still trading.

On February 24, it was announced, a ban on the trading of terrestrial wildlife as food—trading in wild animals for all other purposes still remained legal.

April 8 only sought to add flesh to these past announcements—still clipping off leaves.

Yet, there may still be hope—perhaps, this is a strategy. We would just have to wait and see.

The trade in wildlife and endangered species—pandemics/epidemics aside—is a bloody, greedy, vicious circle involving international crime syndicates (it is the third most profitable international criminal activity—coming just after illicit drugs and human trafficking). Its tentacles spread far and wide to the West, Asia, Africa—all over the world, with China dominating. In Vietnam, USA, Thailand, Kenya, etc. trading is rampant.

These nations' powerful and influential people cash in massively on the trade—political and religious leaders, government and embassy officials, law enforcers. In fact, the machismo attached to the patronisation of wild animals, coupled with Chinese political/government officials' records of partaking in the illicit trade, further casts a shadow on this 'outlawing' announcement by China. How effective will these laws be when the top breakers are the makers?

And should these laws even prove effective in culling the trade and re-socialising Chinese folks, chances of such paradigm shift lasting would still be low. For worldwide, the trade would still flourish, and the Chinese people deep in their palate for and profiteering from these animals; and having longstanding wildlife trade links with many of these countries, would find themselves, much like the repented sinner, relapsing. What we need, then, is global action against this global trade.

With all the global deaths and distress the COVID-19 pandemic is causing, one Chinese wildlife trader had this to say, “I'd like to sell once the ban is lifted. People like buying wildlife. They buy for themselves to eat or give it as presents, because it is very presentable and gives you face.” He, in fact, noted that he had stockpiles of these animals in freezers waiting.

Racism gets in the way

Racism and the accusations, thereof, get in the way of constructive discourse.

Why the focus on China? For one, it is the most populous nation; it is the industrial leviathan of the era with close and frequent links with countries worldwide. In the trade in wildlife and endangered species, the country ranks number one; in the emergence and re-emergence of zoonotic diseases, the nation has great potential (the potential to leave us all for dead). All these factors, and more, are recipes for a good pandemic.

The critique of China, however, loses weight when our argument veers towards judgements—of their palates, tastes, and culture. We cannot tell an entire people to stop eating bats 'because it's disgusting'. With scientific evidence, past and present epidemics/pandemics to prove, we can however beseech them to reconsider certain practices because of the harm they pose to global health, to human and animal ecosystems, et al.

After all, who are we to judge a nation's palate when we eat cows—an animal that another culture/religion considers gods—without a bat of an eye? (pun intended). Who am I to judge someone else's taste, when even now as I am wrapping up, I am craving fufu and palm nut soup with snails—those disgusting spewers of phlegm-like substances—with a dash of prekese (you know, for precaution).