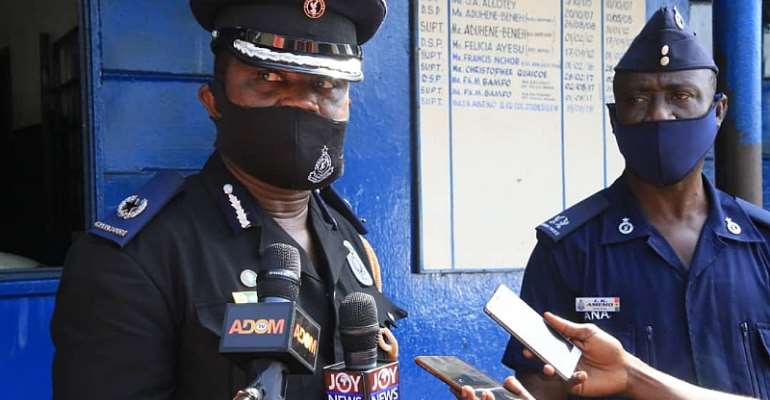 The Divisional Commander in Charge of Nima Divisional Police Headquarters, Assistant Commissioner of Police (ACP) Abraham Quaye, has made a passionate appeal for the testing of police personnel and inmates to be a continuous process in the wake of the novel coronavirus (Covid-19) pandemic.

"The continuous testing of officers and inmates will enable us to know who has contracted the virus and those who do not have it," he submitted.

ACP Quaye made the appeal while speaking to a cross-section of journalists during a disinfection exercise at the Nima Divisional Headquarters, Accra, by Zoomlion Ghana Limited, which place also accommodates the Nima District Police Headquarters.

According to him, it was not an episodic event, insisting that "one can test negative today but test positive for [Covid-19] tomorrow."

He said making the process a continuous one was necessary because of the fact that the police were always in close contact with the general public.

"...So that at any point in time we will be able to know who has contracted the virus and who has not which will help prevent its spread," he further added.

However, he was quick to add that one person who is not a police officer but “one of our stakeholders who happened to be around and took part in the exercise tested positive for Covid-19.”

“He has been secluded and had been take to an isolation centre where he was receiving treatment,” he revealed.

Again, the divisional commander disclosed that one person amongst some inmates who were brought from other police facilities in Accra also tested positive after blood samples of inmates were taken.

He has since been isolated and was receiving treatment, he added.

The divisional commander stressed that these two cases have compelled them to ask the Police Hospital authorities to come and retest all personnel at the Nima District Police Headquarters including the inmates.

Against this backdrop, ACP Quaye described as a laudable exercise the initiative by the Police Administration to have all police facilities in the country disinfected.

“It will go a long way to create a lasting impression in the minds of the personnel that the Police Administration is very thoughtful of us and has taken our welfare and health needs into consideration,” he said.

Furthermore, he acknowledged what he described as the “invaluable contribution of Zoomlion Ghana Limited towards sanitising the environment of police facilities in the country.

“It will motivate us to give off our best,” ACP Quaye assured.

The same exercise was carried out at the Airport District Police Headquarters, Accra.

Speaking to journalists after the exercise, the District Police Commander, Chief Superintendent Eric Asiedu Asamoah, said the exercise was a morale booster for his personnel.

He also intimated that he has instructed all his personnel to adhere strictly to the Covid-19 safety protocols.

“We also ensure that persons who visit out facility strictly observe all the Covid-19 preventive protocols.

Later, the Zoomlion team went to the East Legon Divisional Headquarters, Legon, Accra, and the Legon District Headquarters to disinfect these two facilities.