South Africa's military is not suited for the fight against COVID-19. Here's why

By Craig Bailie - The Conversation 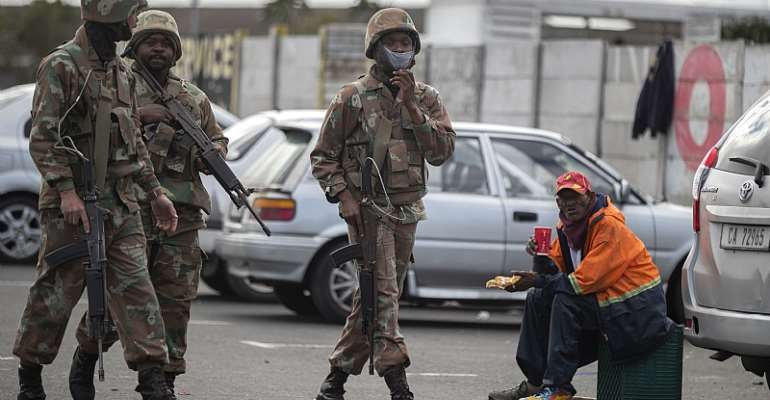 The South African National Defence Force is not suited for internal deployment, particularly where it must fight “an invisible enemy” such as the coronavirus. Its conduct while enforcing the COVID-19 lockdown has brought this reality to the fore.

The military has been trained and equipped for precisely the opposite of what President Cyril Ramaphosa has asked of it – to save lives . Its purpose is to defend the country and its people against physical, external enemies – by killing such enemies if need be.

This mismatch between defence policy and practice is fundamental to understanding the circumstances around the death of Collins Khosa , allegedly at the hands of the army and police during a COVID-19 lockdown patrol.

Chapter 3, on the South African military's involvement in peace missions, is particularly relevant to understanding its lack of readiness to help contain COVID-19. She highlights the difficulties the military has in executing “secondary tasks”, when it's “structured, trained, (and) funded” for warfare.

My argument that the South African military is not up to the task of fighting COVID-19 draws from research on its internal deployment and my own continuing research on the democratic nature of South Africa's civil-military relations.

I have gained additional insights on the social and cultural impediments to nurturing the necessary humanitarian element in the military from focusing on civil-military relations over the past decade.

What are the reasons for the military's unpreparedness? This question can be answered by giving attention to South Africa's political and military leadership, the education and training offered to the military, and how it's been financed.

The responsibility for preparing any military to fight an unconventional security threat in a constitutional democracy ultimately rests with the country's political and military leaders.

Over the past 26 years, these leaders have failed to prepare the military for secondary roles such peace missions , let alone to a fight a virus.

They have failed to create the kind of culture that allows for the alignment of what the military does and its strategic intent. South Africa's political leaders have purposed the military largely for conventional roles, yet they deploy it mostly for unconventional tasks such as peacekeeping , fighting crime , and against COVID-19.

According to Heinecken this disconnect sits at

“the heart of the challenges the military started to face in the post-apartheid era” ( p. 26 ).

Education is another tool for transforming organisational culture, so that an organisation is better prepared to perform its role. South African President Cyril Ramaphosa addresses the military ahead of its COVID-19 deployment. GCIS/Flickr

It was appropriate that the defence force launched a civic education programme in 1997. This was three years after the first democratic elections in the country.

It followed the amalgamation of the then South African Defence Force, the mainstay of apartheid rule, with the military forces of the nominally independent “homelands” and those of the liberation movements .

The purpose of the civic education programme was to establish compliance among members of the new defence force “with the new democratic vision of the government (and society)” . Then deputy minister of defence Ronnie Kasrils proclaimed :

Everyone in the SA National Defence Force, from troops to the top brass, will go back to school.

My own experience of civic education at the Oudtshoorn Infantry School in 2010, and reports on the conduct of South African soldiers on peace missions and at home , both prior to and during COVID-19, point to the failure of the military's civic education programme to adequately inculcate respect for human rights and dignity in the military.

In short, the education and training of South Africa's soldiers over the past 26 years have not properly prepared them for secondary roles, such as peacekeeping or fighting new security threats like COVID-19 .

It's no surprise, therefore, that William Gumede, of the Democracy Works Foundation , a southern African non-profit company focused on the development of democracy, has called for the military's training curriculum to be overhauled, “to make it more human rights based”.

Military leaders can only execute their mandate, which includes education and training, to the extent that they have the necessary resources.

Over the years the military budget has been cut. In addition, almost 80% of the budget is spent on personnel. This has prompted criticism that the country's military has become “a welfare and not a warfare agency” .

In truth, nothing could have fully prepared any of the world's militaries for managing the COVID-19 pandemic. But, had South Africa's political and military leaders done a better job of stewarding the country's military resource over the past 26 years, it would be better prepared for the challenge.

Political leaders, in consultation with defence leaders and civil society, must engage in realistic discussion about what the military's primary purpose should be. They may well decide to make secondary tasks the new “primary role”. They should then align its education and training with that role.

Whatever direction they choose will cost money. But, given the parlous state of South Africa's economy , even prior to COVID-19, it's unlikely the military budget will increase for a long time. This calls for the budget to be spent prudently, in line with the military's core mandate.

Craig Bailie does not work for, consult, own shares in or receive funding from any company or organization that would benefit from this article, and has disclosed no relevant affiliations beyond their academic appointment.