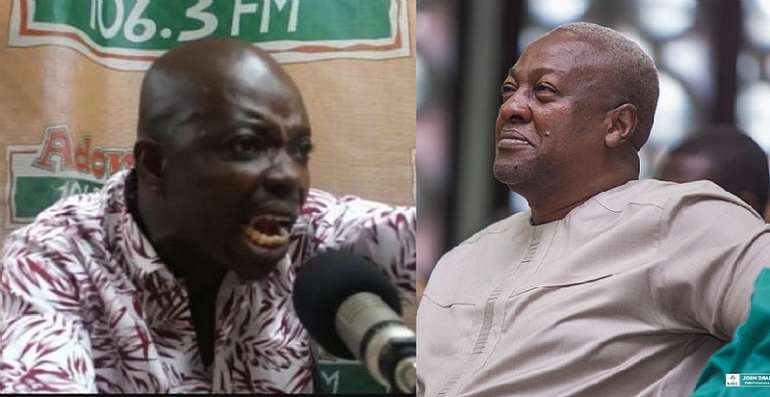 The relevance of the proverb, " The Key to an Issue can Unlock the Door of another Issue" will be demonstrated shortly to serve a warning to would-be bullies, cheats or less intelligent persons who act whimsically irresponsibly.

It is currently the news in Ghana that former President John Dramani Mahama has demanded the Criminal Investigations Department (CID) of the Ghana Police Service to investigate one Mr Kwame Baffoe, alias Abronye DC, for asserting on air that he, Mr Mahama, was the killer of the late President Professor Evans Atta Mills and also, has tasked some people to kill some members of the NPP to cause chaos in Ghana.

I don't want to repeat myself here as I have already published my discordant views on the step taken by former President John Mahama. He should have sued Abronye DC rather than requesting the CID to investigate him on his allegations against him, a purported unhinged mind as Abronye DC is, in the view of former President Mahama.

If "one good turn deserves another", then one problem can elicit another problem. Thus, one can open the Pandora box by starting a problem. Instead of Abronye quietly presenting himself to the CID to be investigated, he went a step further to lodge a formal complaint against former President Mahama. Now, both of them are to be investigated and subsequently charged to court.

Now, I think Lawyer Amaliba, the legal counsel for the NDC was on air on Wednesday, 27 May 2020, decrying why Abronye DC did not only submit the proofs of his allegations against former President Mahama to the CID but also, lodged a formal complaint against him. "When it is coming, it is doing". Now, it has got the late President Professor Evans Atta Mills' brother, Mr Samuel Mills, dabbling into the matter for his own reasons.

For many a discerning Ghanaian, President Mills died under suspicious circumstances if indeed, all the surveillance cameras (CCTV cameras) at the Castle went down on that fateful day and hours preceding, during and after his demise with his military body guard disappearing and his most trusted government appointee, Koku Anyidoho, suspected of using internet moniker Nana Akua Tweneboah Kodua and Margaret Jackson, travelled outside the country to Nigeria or so, on the same day.

In another case, one Demon Breaker and Manasseh, on their mission to alert Ghanaians to false prophets and their tricks, might have mentioned one Rev. Obofour when they went live on Net2TVGH. One social media commentator, Mr Hoahi (Nana Osei) on his own TV Channel gave publicity to the allegations by Demon Breaker and Manasseh. His action did not sit well with Rev. Obofour so he has sued him, serving a writ of summons on him.

However, Rev. Obofour was once video-recorded in his church, very furious and insulting, alleging that a certain rich man who has a TV station and also is a businessman should not dare him by sitting on his TV making allegations against him or else, he, Rev. Obofour, will expose him for drinking blood and always killing many people. In a fit of uncontrollable anger, Rev. Obofour is in trouble at the hands of Hoahi. Hoahi has capitalised on the video, given it currency and will surely use it to lodge a complaint against Rev. Obofour. I hope Rev. Obofour will not come out to deny the veracity of his allegation by claiming it was only a banter same as when politicians like former NDC Central Regional Minister, Amma Benyiwa Doe, repeatedly lied about NPP when her party was in opposition only to turn around to tell Ghanaians that all that she said about NPP was a mere "political talk" but were not true, when NDC came to power in 2009.

The said video on Rev. Obofour's moment of madness was made about seven months ago but co-incidentally, it was fished out from the archives and given currency as though, it was in response to the recent allegations made against him by Demon Breaker and Manasseh.

For the fact he has sued Hoahi, and the damning video of his knowledge of someone killing people for rituals but refused to report the person, he is in deep trouble should Hoahi use it to his advantage or the National Security invite him for interrogation. Again, Hoahi can in his complaint, if he would lodge any, question to know Rev. Obofour's sources of income and if he pays taxes on whatever jobs he does to get that huge income to import expensive cars for his personal use in Ghana.

Now, Ghanaians can see the veracity of the adage, "Asembi safoa hini asem bi pono" The key of/to an issue/problem can unlock (open) the door of another issue/problem". In the case of former President Mahama, he would not have caused the investigation of Abronye DC into the death of President Mills if Abronye DC had not allegedly falsely accused him. Abronye DC on the other hand would not have lodged a counter investigations against former President Mahama if he, President Mahama, had not demanded the CID to investigate Abronye DC. In Rev. Obofour's case, if someone had not sat on television to make seemingly unfounded allegations against him, he would not have sued Hoahi who picked it for elaboration and wider worldwide publicity. And, Hoahi, may not be tempted to defend himself using Rev. Obofour's own video of his knowledge of some rich person killing people and also, how he makes so much money to buy expensive cars from abroad.

Things are knocking against one another and in the end, Ghanaians will have the last long laugh. Criminals are being exposed by the grace of God to save Ghana from being recolonised by superior foreigners by the fact these criminals are selfishly depriving Ghana of the resources needed for her development through their crimes and corrupt activities.

The author has 2071 publications published on Modern Ghana.

President Akufo-Addo’s sterling leadership saved us from COV...
2 hours ago