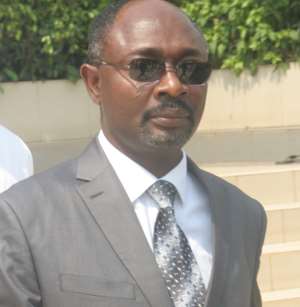 Lid it, bid it, try it and buy it.
Who wouldn't want or like to own a property at Trassaco Valley---an upscale neighbourhood in Accra, Ghana's capital?

Ironically, when the state auctioneer designated to execute this assignment hit the streets and jockeyed to and fro in search of a prospective bidder for Woyome’s assets he couldn't find one. He couldn't pronounce this well known auction slogan--- '1-2-3 and the winner is [name]." Bottom-line, there was nobody to be declared winner.

Are Woyome’s assets jinxed?
It seems like it. And who's cast an evil spell on the properties? But on a more serious note, there could be other reason(s) that had shaped this development.It's understood nobody showed interest in buying the properties of Mr.Alfred Agbesi Woyome, despite Supreme Court's order that they be auctioned to defray his over US$50 million debt he owed the state.

Albert Kan Dapaah minister in charge of National Security, says the assets of the embattled businessman which were to be auctioned by the state remain unsold. You heard that right?

"The auctioneer tasked with auctioning the properties has indicated his inability to successfully execute the task because potential buyers are afraid, amongst other reasons that the properties may be restored to Mr Woyome by the state in future."

Afraid of what...? Is that reason legit when the Supreme Court had given an order?

Which future governments would undercut the SC's directive and embark on what could be viewed as a futility exercise? What other reasons could account for this indifference in the sale? Are the assets not attractive or good enough? Or it's just fear mongering perpetrated by some Woyomites (Woyome supporters) aimed at thwarting the state's effort to sell the properties?

In 2019, the Supreme Court, ordered the sale of properties discovered by the state to belong to the NDC bankroller to offset a GHS51.2 million judgement debt paid him which the country’s apex court had ruled must be refunded.

False claims
According to the court, a claim by the now-defunct UT Bank that Mr Woyome used two of his houses at Trassaco as collateral for a loan could not be proven.

Also, the court ruled that Mr Woyome’s quarry was not used as collateral as he and the bank had claimed.

What else were to be auctioned? Two houses at Trassacco, Mr Woyome’s property at Kpehe a suburb in Accra and a stone quarry he owns were to be sold.

Deputy Attorney General Godfred Yeboah Dame has indicated that all the said items have a total worth of GHS20 million. That would help defray about half of the outstanding debt if those assets get sold.

But as things stand now it appears the sale is in limbo.

Does the state have a plan B?
Sure there is. In a letter addressed to the office of the A-G and ministry of justice, Mr. Kan Dapaah stated this: "It's been decided that the properties be surrendered to the state to obviate the need for an auction and called on the AG to “take the necessary steps to have the above decision effected.”

However, the letter failed to outline the exact steps the state intends to employ in addressing the issue.

The author has 453 publications published on Modern Ghana.