Ken Agyapong Not A Monster, Mahama Can Never Be His Victim 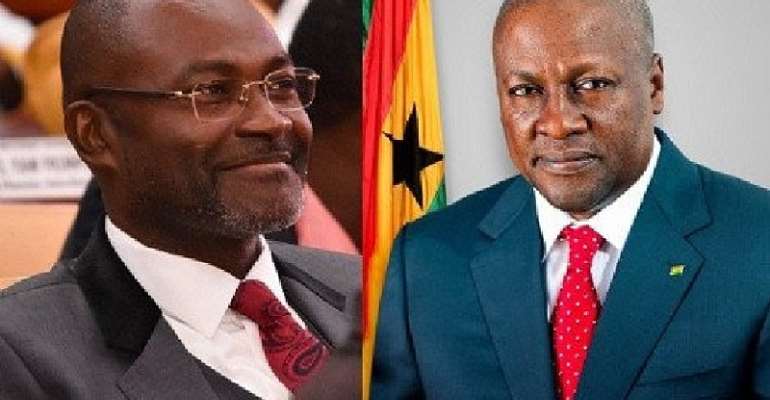 Given his brittle popularity but belittling dignity nationwide, the Assin North Member of Parliament, Kennedy Ohene Agyampong (KOA) probably needs some amount of "camphor" in his mouth to stop the character assassination of undeserving persons in this country.

He has been a successful gold medal winner in making simpleton of fellow citizens.

But the former "dishwasher", ex-New York City taxi driver, and a once celebrated talakawa who operated "Atteh Nyo'ni" to creating a pyramid of wealth prior to his rise as one of the well-to-do in the country, could not have said anything better than describing former President John Dramani Mahama's door-to-door visit and distribution of food items to some financially handicapped Ghanaians during the partial lockdown period, as cheap. Yes. ("Atteh Nyo'ni" is a Dagbani term referring to a form of tabletop grocery shop that is carried mostly on the chest of the seller as a small-scale sort of business with handkerchiefs, rubs, Pique chewing gum et that everyone wishes to have)

Well, someone should remind Hon. Kennedy Agyapong that it is a clear sign of patriotic and charismatic leadership for a leader to engage his led in the broad daylight. Without sheer justice, a leader won’t risk his life moving door-to-door like President Mahama did.

Let President Akufo Addo try that and see he would be able to get back to his office in peace. People are tired of him.

Fellow Ghanaians, there's no doubt Hon. Kennedy Agyapong is one of the "prodigious" sons of this country, unfortunately. He is damn rich and has been roundly acknowledged to be a "drunkard" who is not afraid to always say it as it is.

Many of his traducers accuse him of being a Drug Lord and has probably been making his huge sum of money from "unclean" sources. Something he never misses the opportunity to always debunk at every given opportunity.

Kennedy Agyapong is a well known nauseating braggart. He’s a showman. Perhaps very nimble with the communication but clueless on how to guard, jealously, his hard earned reputation.

In an interview with Nana Aba Anamoah in 2015 on TV 3, he boasted of having 105 houses in East Legon alone, three wives and thirteen kids with good education at the time.

When he was questioned why he always brag and making noise around the country? His reply was simply that he wants to encourage and inspire the youth and every pauper to be hopeful: because if handkerchiefs, red and white rub, Pique chewing gum etcetera seller, could rise to this level of financial independence, it is only appropriate to inspire the youth.

Hence, Hon. KOA is not someone one may mistake for a publicity hunter, office seeker, or exploiter of situations with his frequent appearance in the media. He seems to be bigger than being influenced by anyone with his huge bank balances.

However, his boorish but loutish self employed job to always fulminate and castigate fellow citizens through mockery and badmouthing, is what has significantly amputated his dignity in the eyes of all fair-minded Ghanaians.

I used to love him a lot, and he was prioritized in my list of financial role model before he eventually went gaga with his mudslinging of anybody who gets on his way.

Interestingly, his stinging and vile tongue seems to know no foe or friend: from public to civil servants, journalists etc. anybody could be enslaved by the unkind effects of his sadistic solipsism.

His latest venom has been poured upon some "pastorpreneurs" and spiritual merchants in the country. What they have done to him, we don't know.

As an MP with an incurable verbal diarrhea, Hon. KOA always makes rather asinine if not unsupported allegations that former President Mahama is his best friend in many of his interviews. Meanwhile, President Mahama has always been on the receiving side of his vituperative and condescending comments. What kind of "best friendship" is that?

The honourable Member of Parliament whose lawmaking duty seems to be more of punditry on TV than in the august House, has virtually made a political graveyard of his best friend president Mahama, a convenient punching bag, and a doormat in recent times.

Even though Mr. Agyapong is known for speaking "hard truths" to power, he has never seen it expedient to bailout his "best friend" former President Mahama who has been unjustly vilified and maligned because of what he stands for.

Chief Aygapong knows that his party, the New Patriotic Party, is the biggest and worst scam that has ever happened to Ghana and Ghanaians, but he remains funereally quiet about it. He only gets to speak when juicy contracts are awarded "unfairly".

Daddy Kennedy Agyapong is aware his best friend former President John Dramani Mahama is the only "gamble" worth taking for Ghanaians compared to President Akufo Addo, but Mr. Agyapong is comfortably silent about that to Ghanaians.

He is one of the brighter role models and a beacon of hope to the struggling masses of the youth of this country. However, his braggadocio character and always trying to prove a point that he is not suffering from "oral candidiasis" by spewing garbage in every given material moment, has really made him unappealing, as a role model, to responsible youth of this country.

The hard truth teller and at the same time a gaseous nonsense talker, can't be blamed and should not be blamed. "Any man in my shoe would do worse" he once told Nana Aba in an interview.

Experience has shown that there are three kind of naturally acknowledged prominent persons on the surface of the earth: A knowledgeable person, a leader, and a rich man, and these three have been tamed and cowed before the woman - according to Sheihu Bayan.

What happens is that, God hardly combines and condenses all of these three qualities for one man. Usually, God permutates two of these bounties of His in one person, such as wealth and leadership only without knowledge, or knowledge and leadership without wealth.

If a person acquires beneficial knowledge first, it naturally beckons leadership and wealth automatically to him.

It is almost impossible to get leadership without both knowledge and wealth under one's belt. But if there's wealth alone leadership could often be faked, and knowledge is attempted or even feigned!

Individuals who acquire knowledge to either become wealthy or leaders or even combined the two, would naturally be humble, wiser in their dealings, and have enormous regard for others.

The same cannot be said for people who get leadership or feigned knowledge due to their wealth earned out of hard labor!

You may then hazard a guess which category one may likely find the likes of Hon. Kennedy Agyapong who has conveniently reduced people's Representation and legislation to nitpicking on others as a leader because he is rich!

Isn't it fascinating, that the self satisfied "town crier" over his own good works actually thought it was inappropriate for his colleague MPs to have added their images and well-wishes messages embossed on the items distributed to their constituents?

Look at a clear case of kettle calling pot black!

Is it not worse to sit on TV, or radio station at the full glare of all Ghanaians and announce how you give others chop money, pay their bills, fees, etc. than decorating bread and sanitizers with images of the donors?

Ideally, Hon. Kennedy Agyapong is a pillar in the "garden" of many individuals alright with uncommon generosity but his frequent publicization of what he gives others, remains the biggest undoing of such humanitarian works.

One is rather at a loss the amount of money his party has paid him to be on the nerve of the former President. Perhaps, he's richer than his party.

Let Hon. Kennedy Agyapong and his cohorts be cautioned about their dastardly attacks on the former President. It might boomerang as their party has been backfired.

Let the "TV program legislator" leave President Mahama alone if he can't support him to rescue Ghanaians and liberate our country from the manacles of borrow to Chop-chop leadership under President Akufo Addo.

For President Mahama at this juncture is like the dormant volcano, he is to be erupted at the appropriate time with full force little later this year.

High attendance on first day of parliament's 3rd meeting of ...
45 minutes ago