By Dave Clark, with AFP bureaus 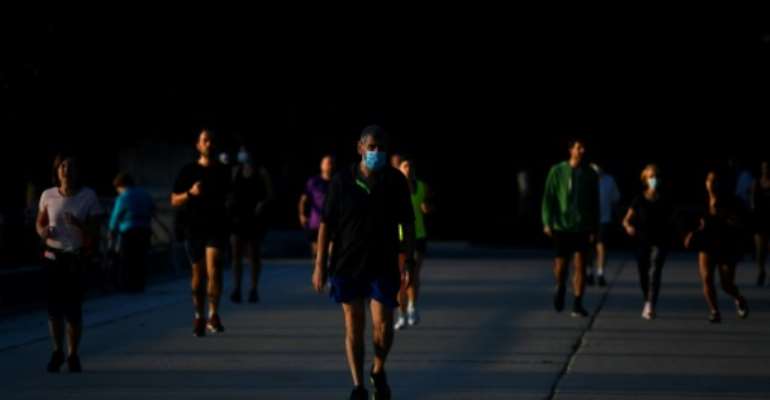 Spain continued to slowly ease its lockdown, one of the toughest in Europe. By Gabriel BOUYS (AFP)

The EU unveiled a proposed 750-billion-euro recovery plan Wednesday to get the continent back on its feet after the devastation wreaked by the coronavirus pandemic, as Latin America outpaced Europe and the US in the number of daily infections.

The massive European plan follows other unprecedented emergency measures introduced around the world to rescue economies shattered by the disease, which has claimed more than 350,000 lives while infections top 5.6 million.

While the virus continues to wreak havoc in Latin America, Europe has slowly started reopening businesses as outbreaks on the continent slow, but Italy and Spain lack the firepower of richer European nations to rebuild their economies.

The European Union put forward a 750 billion euro ($825 billion) proposal to the European Parliament and member states on Wednesday, aiming to help the worst-affected countries with a mix of grants and loans.

"We either all go it alone, leaving countries, regions and people behind... or we walk that road together," she said.

The proposed package is expected to kick off tough negotiations, as backers try to win the support of some northern EU states that oppose paying out aid in grants to nations already under mountains of debt.

The proposal comes as the continent -- which has lost at least 173,000 people to COVID-19 -- grapples with the human tragedy and economic destruction.

Spain on Wednesday began 10 days of official mourning for the more than 27,000 people who died in the country, with all flags on public buildings at half-mast.

Restaurants in France and elsewhere in Europe are embracing new ways of dining out. By ALAIN JOCARD (AFP)

The Iberian nation and others hit particularly hard, such as Italy, Germany, France and Britain, have all started easing their lockdowns, as people head to shops, sunbathe at beaches and run in parks after months of confinement.

While desperate to kickstart their economies, especially the tourism sector, most governments in Europe are also trying to move cautiously, afraid of a second wave of infections.

In Cyprus the badly-hit tourism sector inched back to life as beaches opened again -- but with sunbeds and parasols spaced apart to avoid crowding.

Tourism is starting to creep back in some countries, even hard-hit Italy which reopened Pompeii this week. By Tiziana FABI (AFP)

Russia, meanwhile, said it had passed its peak of infections and in a sign of growing confidence a lockdown in hard-hit Moscow will start to be eased on June 1.

"Today we can already talk about the next steps out of the crisis situation," Moscow Mayor Sergei Sobyanin said, adding that shops would reopen and people would be free to take walks in the capital.

But while many Western nations are creeping toward some form of normality, the virus has continued its march in Latin America, which has outpaced Europe and the United States in the number of daily infections.

"We are particularly concerned that the number of new cases reported last week in Brazil was the highest for a seven-day period, since the outbreak began," said Carissa Etienne, director of the Washington-based Pan American Health Organization.

"Both Peru and Chile are also reporting a high incidence, a sign that transmission is still accelerating in these countries."

Brazil reported the highest daily death toll in the world for the fifth straight day, pushing its total to 24,512 with infections soaring to more than 390,000.

The virus is also fuelling a political crisis in Brazil, where right-wing president Jair Bolsonaro has downplayed the COVID-19 threat and lashed out at state governors who have asked people to stay at home.

Police on Tuesday raided the official residence of one of Bolsonaro's leading critics over the response, Rio de Janeiro Governor Wilson Witzel, alleging he embezzled public funds for the virus.

Witzel called the raid "political persecution" and warned: "What happened to me is going to happen to other governors who are considered enemies."

The United States remains the hardest-hit nation in the world and with a death toll approaching 100,000, President Donald Trump has weathered a torrent of criticism for his handling of the crisis -- and for not wearing a mask in public despite recommendations from his own administration's experts.

The US is the hardest hit by the virus in terms of deaths and infections. By SPENCER PLATT (GETTY IMAGES NORTH AMERICA/AFP)

Trump's principal preoccupation has been for a quick turnaround of the badly battered US economy, and he has pressured local and state leaders to ease lockdowns.

The US leader kicked up a fresh storm of controversy this month when he said he was taking the anti-malaria drug hydroxychloroquine as a preventative measure against coronavirus.

France said Wednesday it was banning the drug as a COVID-19 treatment, following a similar decision by the World Health Organization over fears of dangerous side effects.

On the economic front there were some positive signs from France, where economic activity was making a clear if cautious recovery after lockdown measures were relaxed earlier this month, the national statistics agency said.

But the country was still facing a roughly 20 percent contraction in economic output this quarter, it added.

Meanwhile the International Labour Organization warned of the global fallout among young workers who have lost jobs because of the pandemic, a cohort it dubbed the "lockdown generation".

"As we recover from the pandemic, a lot of young people are simply going to be left behind. Big numbers," said ILO chief Guy Ryder.

The organisation estimates that one in six people under the age of 29 have been forced out of work because of the crisis -- and that the impact could last "a decade or longer".

"People will be permanently scarred by the immediate effects of the pandemic," Ryder said.