Down The Lane Of A New Voter Register: The Consistencies - Part 1 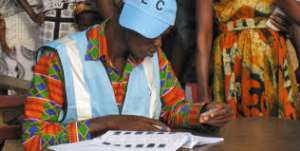 This year is an election year, Agyaaku. So some of my epistles to you will be election-related. You know your grandson is not apolitical. But I must be objective on issues, no matter where I belong. That is what you taught us to be, Nana. Agyaaku, we all know voter register is a key ingredient in conducting elections. There have been issues surrounding Ghana’s voter register for quite a long time. I have decided to tell you what I know about it. Please take your stool, grab your always-meticulously-brewed dudo and let us drive on, Agyaaku.

Nana, you recall that after the 1992 elections, the opposition parties launched the “Stolen Verdict’ campaign which, among other things, called for electoral reforms. The reforms included compilation of a completely new voters register and voter identity cards. But, the ruling government then (National Democratic Congress, NDC) believed the electoral process at the time was efficient and thus made no electoral reform demands. However, some reforms took place, including reformation of the voters register used in the 1992 elections. Since then, several other reforms took place culminating into the institution and usage of biometric registration and verification of voters to curb voting fraud before the 2012 elections.

These were thought to be enough to arrest voter register brouhaha, Agyaaku. On the contrary, they did not. Among other things, the then opposition New Patriotic Party (NPP) cited infringements in the electoral system after the 2012 elections. Again, the voter register was cited as not being healthful. There were existence of names of foreigners and minors on the electoral roll. Also, the number of registrants on the provisional voter roll had jumped from about 13 million voters to 14 million in the final register, after editing and possible deletions. Furthermore, the presidential voter register was 500,000 registrants higher than the composite parliamentary voter register.

One of the major bases for this was the use of the National Health Insurance Scheme (NHIS) card for registration. That accounted especially for the possibility of foreign nationals having their names on the register. This was evident in the Abu Ramadan and Evans Nimako’s case against the EC at the Supreme Court in 2014.

As you know, the NPP proceeded to court after the 2012 elections, Nana. Besides the NHIS registrants, several issues unravelled at the Court. Notable were the somehow mysterious ‘Finger of God’ Polling Station and the ‘twenty-one zero’ (210) scenario. The difference of 500,000 between presidential and parliamentary registers was explained by the EC to have arisen from overseas registrations. However, at the Supreme Court the EC only provided 705 names (out of 500,000), of which 52 persons had done multiple registrations. The rest could not be accounted for.

But in its ruling, the Supreme Court chiefly kept John Mahama as validly elected in the 2012 elections. They however stated among other needed reforms that the voters register must be compiled and made available to the parties as early as possible. That was 2013. Please take not of ‘as early as possible’. Also, a supplementary register may be made to cater for late exigencies, and the Biometric Device System must be streamlined to avoid breakdowns. These are to help do away with the issues of bloating (unaccounted registrants), foreigners and minors on the voter roll, Nana.

Agyaaku, at this point, all stakeholders agreed that the register was not fit for purpose. To make it fit for purpose is where the dichotomy was. The then opposition NPP and some other parties opted for a compilation of a completely new register. The then ruling NDC and the Electoral Commission (through its commissioners then) favoured deletion of those that registered with the NHIS card, and allowing same to re-register with an appropriate proof of citizenship and legitimacy to vote. There were lots of calls behind both standpoints. Nothing concrete was said about how to rid the register of unaccounted registrants, thus far.

The electoral commissioner retired in 2015. A new person took over. There were other changes at the EC. However, their stand on new voter register did not change, Agyaaku. And rightly so: they are independent, as long as what they are doing is not in conflict with the constitution. The opposition continued their call for a new register. The incumbent continued their support for ‘no new register’. That is some level of consistency.

Thus, in 2015, Mr Mahama, president at the time, advised the opposition to allow the EC to do their work because the EC is independent. He stated further that the EC is at liberty to decide what is best for the country, as the 2016 election got closer. Mr Mahama made this call at an event in France. He reiterated the call in 2016 at an Islamic event in Kumasi, adding that ‘demonstrations against the EC could negatively affect the country's democratic credentials and so any party with concerns over the electoral process must use the Inter-Party Advisory Committee (IPAC) for redress’, as reported by graphic.com. That is very thoughtful of a leader. Is it not, Nana?

However, Nana Akufo-Addo in 2016, as opposition leader, was still calling for a new voter register, as aired on Metro TV’s Good Evening Ghana. So both parties were being consistent in their calls concerning a new voter register. They both did so without issuing threats, Agyaaku.

But, Agyaaku, can same be said of the current calls by both parties on the new voter register? How has subsequent change in government and EC leadership affected the standpoint of both parties concerning the new voters register? Are they still being consistent? Well, Nana, we will see in the next epistle on this issue. Until then, please continue sipping on your esteemed dudo, Agyaaku, as I continue listening to ‘Puppet Master’ by my favourite reggae musician, Lucky Dube.

Lead by example, don’t also travel abroad for one month – Ab...
42 minutes ago