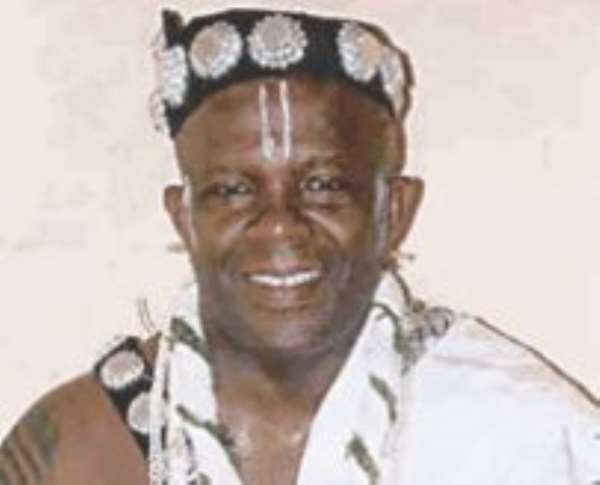 Trouble is looming within the Ga State over the announcement of the installation of Dr Jo Blankson of the National Development Planning Commission (NDPC) as the new Ga Mantse because the three of the four royal houses have described the purported action as a violation of Ga custom.

Dr Blankson, whose stool name is King Tackie Tawiah III and is a member of the Law Review Commission, was installed on June 11, 2006 by Nii Akropong III, the Head of the Teiko Tsuru We, one of the four clans of the Ga State, to succeed Nii Amugi II, who passed away two years ago.

But the three other houses, Amugi We, Piam We and Tackie Komme We, have distanced themselves from the purported installation, describing it as unlawful and against the traditions and customs of the Ga State.

They have, therefore, asked the public to ignore the announcement, while efforts are being made to get the right person to succeed the deceased king of the Ga people, who is also yet to be buried.

A press release signed by the acting heads of the three houses and issued in Accra yesterday said, “It has come to the notice of three of the four ruling houses of the Ga Royal Dzaase, namely, Amugi We, Tackie Komme We and Piam We, that on Sunday, June 11, 2006, one Dr Jo Blankson, aged 63, was purportedly installed as the new Ga Mantse under the stool name King Tackie Tawiah III by Nii Akropong III, the Head of the fourth ruling house, Teiko Tsuru We.

“The three ruling houses mentioned above wish to dissociate themselves from the installation, as it was done without their consent and the fact that the said installation was not done in accordance with Ga custom and usage.”

“Customarily, the deceased Ga Mantse, Nii Amugi II, should be laid to rest before the installation of his successor,” the release added.

The Secretary to the Ga Royal Dzaase, Niiabi Anyah Tackie-Yarboi, said the four houses had met and agreed to nominate five members each to select the Dzaase who would preside over the burial of the late chief and the installation of the new chief of the Ga State.

He expressed surprise that the other house had ignored the due process to announce the installation of a chief for the Ga State, thereby flouting laid down customary processes which had been used since time immemorial.

Sqd Leader George Tagoe, a member of one of the three other houses, said “we must stop making mockery of ourselves because the right things have to be done to avoid any controversy”.

“The selection of the five members each from the four houses was enough testimony of how peaceful the process was to be carried out to avoid any misunderstanding,” he said.

Sqd Leader Tagoe said it was now time for the Piam We to install a chief and that would be done by a Dzaase who would be expected to select the right person and later install him as chief of the Ga State.

The Head of the Nai We, the House of the Chief Priest of the Ga State, Numo Tumomli Yartey II, on his part, also requested the public to recognise the new chief who had been installed.

He said it was the turn of the Teiko Tsuru We to occupy the stool because when the late chief was installed, the cloth he wore was passed on to that house, “and by tradition the house which has that cloth is the one to select a successor to the throne”.

Numo Yartey said the new chief had been installed by Nii Akropong, the Head of the Teiko Tsuru We, as tradition demanded and in the presence of Nai Wulomo (the Chief Priest) and made it clear that the right proceedings had been followed.

Asafoatse Okpoti III of Asere, who is also from the Numo Yartey We, supported the claim that the four houses were made to select five members each to nominate a Dzaase.

He said after that was done, the man who was installed as such later refused to continue with the processes because he claimed to be a Christian whose values did not agree with the customary practices.

Asafoatse Okpoti said when the other houses were made to present the Dzaase, they refused to do so and, realising that the whole process was delaying, the Teiko Tsuru We had no option but to go ahead to ensure that Dr Blankson, whose turn it was to succeed Nii Amugi, was installed to pave the way for the chief to be laid to rest before the end of the year.

“What has been done is unquestionable and must not be challenged,” he noted. He said the Chief Priest himself had endorsed the process and that was final.

In the process of finding the views of others, the Chief Priest, Nai Wulomo, sent a message to the reporter to the effect that he did not want to say anything now.

“On Sunday at 2.00 p.m., I, together with the four houses, will meet and I will make my final statement on the matter then,” the message said.

He expressed the hope that all the houses would be present at the said meeting where the matter would be laid to rest.
Since the death of Nii Amugi II, many companies had donated huge sums of money towards his funeral and the installation of a new chief to succeed him.

However, the date for the burial of the late chief had been postponed on more than three times because of the lack of understanding on the installation of a new Dzaase and the subsequent selection of a successor to the late Ga Mantse.

Meanwhile, some Gas continue to express their disappointment at the turn of events and wonder why the various houses were not prepared to give them a new chief to steer the affairs of the Ga State.

They claimed that because of the absence of a substantive chief, the Ga State was lagging behind in development and unity and expressed the hope that issues would be settled as quickly as possible to redeem the image of the Ga people.