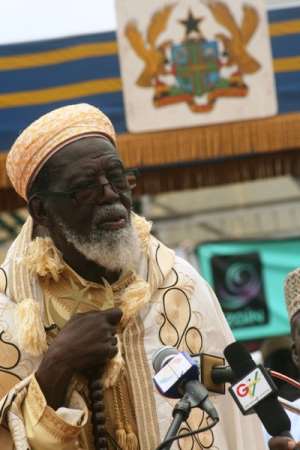 In the name of Allah, the most gracious, the most merciful. On Sunday 24th May 2020, during the virtual Eid-Ul-Fitr message to the nation, His Eminence the National Chief Imam, Sheikh Dr. Osmanu Nuhu Sharubutu after he led for the first time, the leadership of the various sects namely Tijjannya, Ahlusunna, Shia and Ahmadiyya; in prayer, expressed his gratitude on behalf of the Muslim ummah in Ghana to His Excellency the President of the Republic for nominating and subsequently appointing Justice Issifu Imoro Tanko Amadu to the Supreme Court Of Ghana.

In his address, His Eminence the National Chief Imam said, "Though we believe you based your nomination and subsequent appointment on merit, we as Muslims feel greatly indebted to you for the appointment. Justice Issifu Imoro Tanko Amadu’s appointment will indeed serve as an inspiration to many up and coming Muslim President o aspire to greater heights in the legal profession, we therefore register our deep appreciation".

The Almighty Allah said in the Holy Quran, " If you are grateful, I would certainly give you more; and if you are ungrateful, My chastisement is truly severe. ” (14:7).

It is against this background that the Leadership of the Coalition of Muslim Organizations, Ghana (COMOG) wishes to associate with the National Chief Imam's message, by expressing our profound appreciation to the President for appointing the first Muslim, who has played a pivotal role in the affairs of the Muslim community in Ghana; to the Apex Court of the land. Having engaged Justice Tanko, COMOG is of the firm view that he had no intention of slighting Islam or compromising on the struggle by the Ummah for recognition of their constitutional rights.

The Coalition of Muslim Organisations, Ghana (COMOG), wishes to remind the Muslim Ummah of the need to forge the spirit of forgiveness and support for one another. We have to build sustainable tolerance for peaceful development while ensuring that we do not surrender or sacrifice the tenets of Islam, our most cherished faith.

The Prophet of Islam makes us understand that when believers are being pardoned by Allah, two believers who hold grudges against each other are not pardoned, and if the said believers fail to forgive each other after three days any of them who dies will be put in hellfire.

It is therefore imperative for all to imbibe the spirit of forgiveness in order to derive the full benefit of the month-long fasting, prayers, and diverse sacrifices.

It is in this spirit of forgiveness that COMOG calls on all Muslims all over the world to forgive one another and to rally round things that unite us rather than our differences. That is the surest way to make progress as an Ummah.

COMOG wishes Justice Tanko Allah’s guidance and protection as he begins work today as the Judge of the Supreme Court of the Republic.