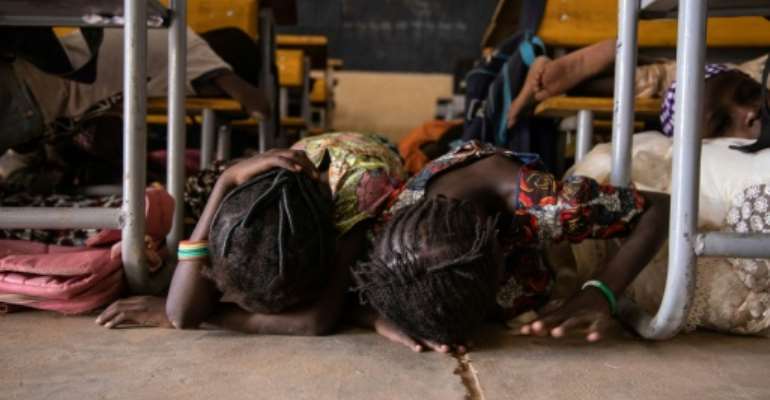 Children hide on the ground during a drill for potential attacks in Burkina Faso, where such assaults have shuttered 3,500 schools. By OLYMPIA DE MAISMONT (AFP)

Jihadist attacks in Burkina Faso have caused 2,500 schools to close since 2017, depriving 350,000 children of a proper education, Human Rights Watch said on Tuesday.

In a 102-page report, the rights monitor said it had documented 126 attacks on schools, teachers and students, more than half of which occurred last year.

Those killed include five teachers shot at a primary school, two teachers who were beheaded, and a retired volunteer teacher who was gunned down as he tutored children.

Armed Islamists "are not only committing war crimes, but are undoing years of progress in improving children's access to education," said Lauren Seibert, who authored the report.

The attacks have had major consequences for youngsters, including trauma, increased child labour and risks of child marriage for girls, the report said.

The investigation is based on interviews with more than 170 people, including 75 teachers, 35 current and former students, as well as witnesses of attacks and relatives of victims.

Around 900 people have died in Burkina Faso since 2015 when jihadists, crossing from neighbouring Mali, began to carry out attacks, often inflaming deadly inter-community tensions.

Nearly 840,000 people in the impoverished Sahel country have fled their homes.

In Burkina Faso, Mali and neighbouring Niger, around 4,000 people lost their lives last year due to jihadist or jihadist-associated violence, according to UN figures.