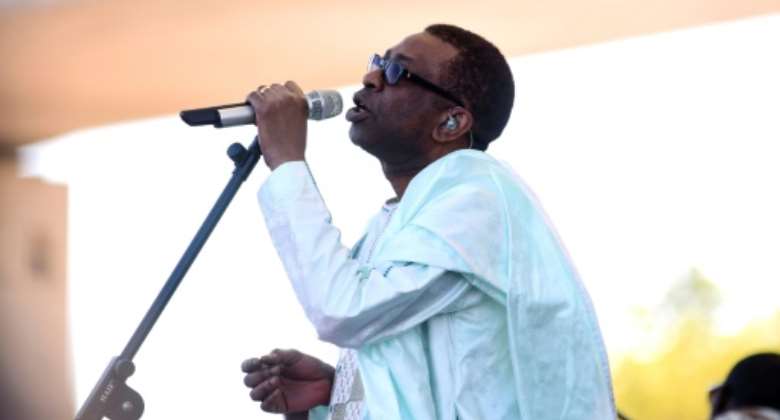 Senegalese superstar Youssou N'Dour joined a galaxy of African talent for a virtual concert to raise awareness of the coronavirus pandemic. By Seyllou (AFP/File)

Senegalese superstar Youssou N'Dour and Grammy-winner Angelique Kidjo were among a galaxy of African talent brought together for a virtual concert to raise awareness of the coronavirus pandemic.

More than 100 artists and celebrities from across the continent and the diaspora took part in the WAN Show broadcast online by the Worldwide Afro Network and carried by 200 African channels on Monday to mark Africa Day.

"After COVID-19, Africa will be great, Africa will be strong. Together we are unbeatable," Malian kora star and hip-hop artist Sidiki Diabate said at the launch of the virtual concert.

The event was modelled after the "One World: Together At Home" concert in April that brought together Taylor Swift and the Rolling Stones playing from their homes.

The highlight of the evening was a remote duet between "Seven Seconds" star N'Dour and Coldplay's Chris Martin, who sang "A Sky Full of Stars."

Beninese singer-songwriter Angelique Kidjo joined Mmre than 100 artists and celebrities from across Africa took part in the WAN Show broadcast online by the Worldwide Afro Network and carried by 200 African channels to mark Africa Day. By Robyn Beck (AFP/File)

"I never thought in a million years I'd see Youssou sing on a Coldplay track," viewer Awacham tweeted.

"I am optimistic, culture is at the beginning and at the end of everything," said N'Dour, sponsor of the evening, which aimed "first to raise awareness of the fight against the pandemic, but also to say that in many areas nothing will ever be the same again".

"The time has come again for us Africans to show the world who we are. Those in the continent and in the diaspora, it is time to be together as one," he said.

"Africa is a continent of rich history, culture uniqueness and dynamism. Africa must rise above this as we have done with every previous challenge," said Rawlings.

"Together as one I know we shall overcome and if music is the food of love let us play on."

A Luanda resident celebrates with a policeman after the Angolan National Director of Public Health lifted a two week virus quarantine order. By OSVALDO SILVA (AFP)

Africa is so far coping with the global health crisis better than expected and has recorded around 115,000 COVID-19 cases and 3,500 deaths.

The pandemic has killed more than 344,000 people worldwide.

"How sad to be stuck in the land of joy and good humour," joked French-born Tunisian comedian Samia Orosemane, who is currently in Ivory Coast due to the pandemic.

"I would so much have liked to return to Paris where people are fighting for toilet paper," she said.

However, the evening sometimes took a more political turn.

"Time for self-preservation, time to be attentive, time to stay vigilant from any Westerners coming to test their vaccine on us," said the "Blood Diamond" and "Guardians of the Galaxy" star.

"Deceit can be powerful but truth is even more powerful," he said.

British supermodel Naomi Campbell called for Africans to come together.

"We face an extraordinary challenge but we cannot afford to be spectators. We must show our resilience and share our commitment as Africans to overcome this and grow stronger from it," she said.

"Use your voice to call our leaders in Africa to use this crisis as a moment to build our solidarity and deal with deep structural issues that affect our nations and their economies."

COVID-19: Our responsibility to one another is to get vaccin...
58 minutes ago