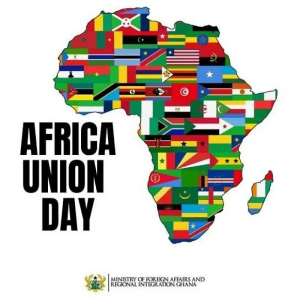 Exactly 57 years today in Adidas Ababa, Ethiopia, the Organization of African Unity was formed. The OAU a post colonial Africa's first continentwide association of independent states was aimed to safeguard the interest and Independence of all African States, encourage the continent's development and settle disputes among member states.

The OAU in its early years achieved striking success by mediating successfully in border disputes between Algeria and Morroco in 1965 to 1967 even though it proved less effective in its attempt to halt civil wars in Nigeria and Chad. However in 2002 the African Union was officially outdoored to replace the defunct OAU. The AU is guided by it vision of "an integrated, prosperous and peaceful Africa, driven by its own citizens and representing a dynamic force in the global arena".

57 years and 18 years endeavor to ensure greater transformation in the continent, yet Africa has been and continues to be described by many social commentators as a continent deprived, betrayed, ruled by thieves ( kleptocretic), in chaos, shackled, existing in name only, in self-destruction and in crises. Professor Ali Mazuri an astute Kenyan historian in his six parables about Africa, described the region as the earliest place of mankind habitat, but the least to become habitable, a continent most humiliated ( slavery colonialism and racism), a continent highly westernized but culturally the farthest away from the West, a continent most fragmented politically, a continent highly endowed but the most retarded and least developed and finally a centre of the world but peripheral politically in terms of decision making.

Much more to say about Africa is a continent that lacks the capacity to execute a sustained policy environment conducive to ensure good governance, entrenchment of democracy, peace and security, growth and development and poverty eradication.

The question is; will the 21st century become truly an African where Africa will emerge from it long period of darkness into a dream fulfilled one ? or Africa will continue to be defined by it past of conditions and circumstances of slavery,colonialism, neocolonialism, racism and apartheid?

In the quest to redeem the continent, several developmental plans and initiatives have been rolled out; for instance the Lagos Plan of Action for the Economic Development of Africa (1980-2000), the UN Programme of Action for Africa's Economic Recovery and Development, the African Alternative framework to Structural Adjustment Programme for Socio-economic Recovery and Transformation and the African Charter for Popular Participation for Development, yet all these developmental plans have proven problematic, if not an exercise in futility.

In the wake of these murky situations there has been yet another glimmer of hope by the emergence of the New Partnership for Africa's Development (NEPAD). The NEPAD is a holistic, integrated sustainable development initiative for the economic and social revival of Africa, involving a constructive partnership between Africa and the developed world. It is a pledge by African leaders based on a common vision with a firm and shared conviction that they have a pressing mandate to eradicate poverty and to place their countries both individually and collectively on a path of sustainable growth and development and at the same time to ensure the continent active participation in the global economy and international politics. The initiative is premised on African states making committment to good governance, democracy, human rights , while endeavoring to prevent and resolve situations of conflicts and instability on the continent.

To measure the objectives and outcome of the NEPAD, African leaders also agreed among other things to subject their member states to a peer review through the use of a unique and innovative African Peer Review Mechanism (APRM). The APRM cover issues, codes and standards pertaining to governance and sustainable development. The performance and progress of the APRM are measured in four thematic areas; democracy and political governance, economic governance and management, corporate governance and socio-economic development perhaps the very issues that have bedeviled the continent.

Thus the NEPAD and its peer review marks a paradigm shift in the thinking of African leaders to reverse the misfortunes of lack of accountability, political authoritarianism, state failures and corruption to embrace and consolidate democracy as well as effect sound and transparent economic management. The NEPAD and its peer review has ensured smarter partnership and cooperation, and has created a unique opportunity to address Africans problems collectively. Again the APRM together with other AU structures have helped to end the OAU policy of non interference, to allow the AU to intervene in member states internal affairs to ensure political stability in times of crisis

Inspite of the few enviable successes of the NEPAD and APRM, a lot need to be done in the light of AUs aims and objectives. As today marks the 57th commemoration of the formation of the AU we therefore call on the Ramaphosa led AU to among other things; transform the NEPAD and its vehicle, the APRM from its voluntary and non- coercive status into being a strong independent continental body with binding recommendations. In addition to this, there should be an institutionalization of a Monitoring and Evaluation Action Plan to track the implementation of the recommendations of the country peer reviewed reports. Again, more political and financial commitments must be made by member states of the AU to ensure effective running of the APRM. It also imperative to extend stakeholder engagement to the private sector and the civil society organisation in the implementation and monitoring of the recommendations of the country review reports. Finally, as opined by the astute Professor of law and renowned Pan- Africanist; PLO Lumumba " the young generation must only have one mantra and only one claim to fame; they must irritate those who are in power so effectively and in such an organised manner, that they will have no choice but to do what is good and right". In view of this, we call on all Africa youths both home and abroad to take keen interest in the governance and the socio- economic developmen of the continent . For the new Africa can only be built when young Africans realize they are integral stakeholders in the rebuilding, retooling and the repositioning of the African continent.

In conclusion, Africa will be the most important player in her own development even though the efforts by external partners are essential, however they cannot alone spark the changes that are so desperately desired. It is for this reason that an innovative initiative as African Peer Review Mechanism must be encouraged and supported to ensure good governance and sustainable development.

This Is New Africa