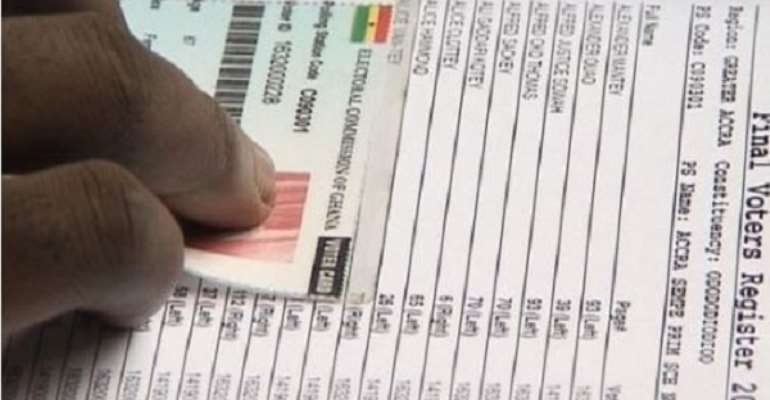 The fundamental principle defining credible elections must reflect on free expression of the will of the people and not the law. No eligible citizen shall be denied the right to vote or disqualified from registration as a voter, according to the UDHR Article 21. Ghana, the first country in sub-Sahara Africa to gain her independence doubles as the first country to use GenKey’s biometric technology to register and verify voters register since 2012. GenKey’s biometric solution in partnership with a Ghana-based STL Supertech have successfully helped Ghana Electoral Commission for the biometric the verification process for 2012 and 2016 parliamentary and presidential election. The same biometric voters' register has also been used three times for District Assembly Election and recent 2019 Referendum. Qualitatively if not quantitatively, no other country in the world has deployed biometrics at such scale in seven successive elections.

Despite Ghana’s success story with BVR, the current administration under President Nana Akufo-Addo has schemed up plans to discredit GenKey and STL solution. To make their excuses sound palatable to enable them to execute their ill-conceived disdain, the EC is saying, the system and machines are outmoded, they didn’t have the password to login to the system, their IT people don’t have the know-how to work with the system, and even the cost to maintain the system is more expensive than compiling a new register. The EC now-infamous decision to compile a new register is a historical scheme planned by the New Patriotic Party. It is certainly a political calculation in terms of the timing coinciding of confirmation of NPP at the helms of an affair. Beyond that, I’m convinced that much of the back and forth over the voter register is its own form of political theatre which NPP had played since 1992.

There are no denying facts about the dangers posed to human health by the Covid-19, and it is stupidity rather than courage to fail to recognise danger when it is close upon you. But most authoritarian governments do not see the scope of the problem, and they will do anything provided that keeps themselves in power. The NPP-led government has demonstrated that the only way they can win the 2020 election is through the rigging, and by disenfranchising huge numbers of eligible voters. That is why EC keeps on insisting that they will compile the new voters register without taking into consideration human health.

EC is taken us back to the colonial era when only a section of the population was eligible to vote. What is the logic of being a Ghanaian, age 18 or above and cannot vote? Yet EC and the government have come out with their definition of who is a Ghanaian where the laws are so clear on the definition of a Ghanaian.

Citizenship in Ghana is a question of law and is governed by the Citizenship Act, 2000. The law outlines 3 main categories of nationality, namely, citizenship by birth, registration through marriage and by Naturalization. Aside from these three (3) main categories, one can become a citizen of Ghana through foundling and adoption, can also hold dual-citizenship.

Under the Ghanaian law, nationality by birth is determined by the date and year the person was born. All persons born before 6th March 1957 and in the confinement of British Gold Coast are citizens by virtue of birth. Those born after independence are also Ghanaians. Anyone who has one of the parents or grandparents born in Ghana is also a Ghanaian.

Nationality by Registration and Marriage

Dual Nationality is acceptable under the Ghanaian laws. This means that a Ghanaian can hold citizenship in any other country and still hold citizenship in Ghana. However, a person with dual nationality cannot hold certain public offices and cannot be a Member of Parliament or Speaker of Parliament. The Supreme Court of Ghana has given reasons that people with dual nationality cannot hold public offices because of the issue of conflict of interest, national security, and state allegiance to Ghana and confidentiality.

The above description of being a Ghanaian means, one can be a Ghanaian-British, Ghanaian-American, Ghanaian-Nigerian, Ghanaian-Togolaise, Ghanaian-Burkinabe, Ghanaian-Ivoirian, etc. Therefore Dr. Mahamudu Bawumia conclusion that our voters' register contains more than 76,000 Togolaise and other nationals is a political gimmick. Can Dr. Bawumia tell us today that none of his ministers and appointees has held any other nationality apart from Ghana?

NPP challenged the results of 1992 election held to usher in the Fourth Republic of Ghana. After demanding a new voters' register and threatened to boycott the 1996 general election if their demands were not met, the US stepped in February 1994 to provide funding for the printing of new voters' card. Unfortunately, the NPP lost the election massively. won the presidency in his second attempt. In 2002, H.E. J.A. Kufuor as the president, the voters' register was renewed and was subsequently used to conduct 2004 and 2008 elections. But as soon as NPP lost the 2008 election, they mounted another fierce defence of the necessity for a new register, this time biometric register. The demand for a new voters' register surfaced again when candidate Akufo lost bitterly to H.E. John Mahama in both 2012 election and the 8 months election petition. First, NPP argued that John Mahama didn't win the election per their calculation. During the landmark election, apart from NPP claiming they were the winner, they at the same time argued that John Mahama’s winning was as results of bloated voters' register.

In May 2015, H.E. John Mahama appointed Mrs. Mrs Charlotte Osei to replace Dr. Afari-Djan as EC Commissioner. The first criticism came from the then Deputy Minority Leader Dominic Nitiwul. He was followed by Richard Dela Sky and other, supported by Ghana Bar Association, who filed a case at the apex court seeking an interpretation of Article 70(2) and 91(3) of Ghana 1992 Constitution, whether the President had the constitutional right to appoint the Chairperson of the EC. Hon. Kennedy Agyapong took to the national television accusing the Chairperson of giving out sex for that position and vowed to use any means necessary to get her removed. Then in July 2016, the then NPP National Women’s Organizer Mrs. Otiko Djaba, renewed the debate over allegations that the EC Chairperson indeed was appointed because she granted sexual favours.

Intensifying their demand, NPP sent 30-page electoral reform documents to the EC, arguing their usual 'over-bloated' voters register and demanded a new credible one for 2016 election. The Danquah-Busia-Dombo tradition listed 9 points ultimatums to the EC, in which they demanded that the compilation of the new register should be done by an independent internationally reputable firm before 7 December 2016. The then Vice-Presidential Dr Mahamudu Bawumia was on errant claiming the voters register contained over 76,000 Togolese and some other national names. The NPP campaign manager, Mr MacManu, addressing a press conference was so empathic about their analysis, turned out to be a hoax. They went further to appeal to the British Government, European Union and United Nations to coerced John Mahama government to heed to their demand.

In a much ado about nothing, the bloated register won candidate Nana Akufo-Addo the presidency over the incumbent. From there on, the story about over bloated register wasn’t their priority. Their priority was to get rid of the EC Chairperson to pave the way for their ill-conceived disdain. The conspiracy to replace Mrs. Charlotte Osei with Mrs. Jean Mensah was hatched. On 13 July 2017, some faceless so-called workers of EC petitioned the President for the removal of EC Chairperson. In a six-page petition filed by their counsel, Mr. Maxwell Opoku-Agyemang, the group accused the EC boss of misconduct, citing breaches of some provisions of the 1992 Constitution as well as the Public Procurement Act, Act 663, all 27 charges were listed against the lady. The President upon receiving the petition referred it to the Chief Justice, who also determined a prima facie evidence against the EC boss and recommended her removal. The ambiguity about the removal procedure of the EC Chairperson has affected the functional independence of the EC.

New Patriotic Party implicitly conspired to remove Mrs Charlotte Osei to enable them to have control of the Electoral Commission. The presidency surreptitiously hatched a scheme to appoint Mrs Jean Mensah as the Chairperson and Dr. Bossman Asare as the first deputy. Since assumption of office both have been doing the dirty jobs for the government. At one time, Dr. Bossman Asare in his response to NDC seeing him as a threat to democracy, he said, “I think if there is anyone who is becoming a threat or a potential threat to the democracy we are practising in our country, then I will rather say that it is the posture of the NDC….”. I believe no academic scholar will behave like this.

The largest opposition party, National Democratic Congress, backed by the three other strongest opposition parties, on the other hand, have rejected EC frenzies excuses. They believe the current voters' register is credible because it is the same register that was used to bring the current president to power. They also argue that if the same register has been used six times, albeit periodic limited registration, what makes it so bad to be rejected? Similarly, the naysayers argue why EC didn’t begin compiling new voter’s register when NPP, the advocators of a new register, came to power in 2017 but waited at the last minute? And it doesn’t make any sense considering the time to the general election. Also, the costs involved in compiling a new voters’ register, the supply of hardware and software and to train own personnel is unnecessary. Besides, most people are tired of wasting their time to go through a whole new registration exercise is unneeded. Also, EC is relying on NPP majority at the parliament to pass the CI-91 which exclude the use of old voters card and birth certificate as an identification document. NDC and other parties, CSO believe that could disenfranchise many Ghanaians to vote. The opposition parties, including NDC, CPP, PPP, PNC, APC and others have threatened to resist any attempt by EC to compile new voters register. They have shown their red colours through massive demonstrations in Tamale and Kumasi. The third demonstration was kept on hold awaiting the outcome of meeting with Eminent Advisory Committee, EC, IPAC and CSO on 30 January 2020.

The meeting between the Eminent Advisory Committee, EC, IPAC and CSO, failed to brokerage the differences between EC and NPP and allies on one hand, and NDC and allies on the other and supported by CSOs. One could conclude that EC had already made up their mind ahead of the meeting. EC is relying on Article 45(a) of 1992 Constitution to compile voters register. Although EC operates as an independent body without any directive from anybody, according to Article 46 of the 1992 Constitution, EC has a wrong interpretation of Article 45(a). That article mandated then EC to compile a new voters’ register, successive EC would revise it periodically. Therefore, anyone who argues the EC has the power to compile a new voters’ register has not read the constitution very well.

The EC bent on compiling a new voters register is because NPP thinks our voters' register is bloated and contain names of other nationals. As I have indicated there the NPP is wrong and EC is following blind argument. On the other hand, EC and NPP are intimidating supporters of other parties not to register, and on the other, no registration, no vote. They also know very that any effort to challenge them in court will not see the light of the day because NPP has parked their favourites at the courts.

Disclaimer: "The views/contents expressed in this article are the sole responsibility of the author(s) and do not necessarily reflect those of Publisher. The Publisher will not be responsible or liable for any inaccurate or incorrect statements contained in this article."