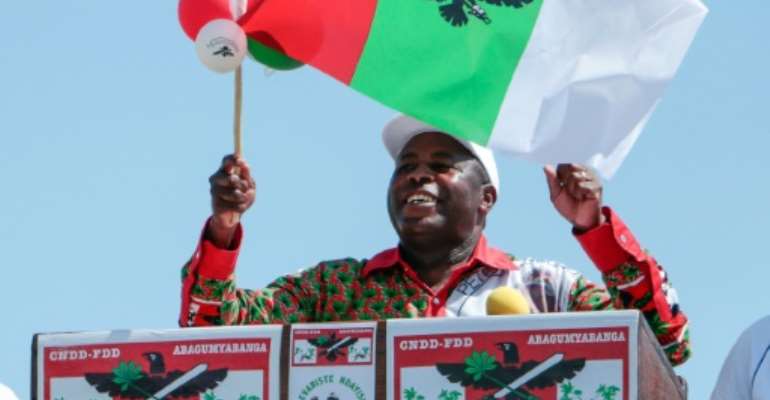 Front runner: Evariste Ndayishimiye of the ruling CNDD-FDD, pictured at the party's final campaign rally on May 16. By - (AFP)

Burundi's ruling party candidate Evariste Ndayishimiye was on Monday declared the winner of the country's presidential election, which the opposition has said was flawed.

The national election commission, in results streamed live on Burundian media, announced that Ndayishimiye had won 68.72 percent of the vote, while opposition leader Agathon Rwasa came in far behind with 24.19 percent.

Ndayishimiye, 52, is a former army general who was handpicked by the ruling CNDD-FDD to replace President Pierre Nkurunziza, who has been in power since 2005 and whose final years in office have been wracked with turmoil.

Nkurunziza's third-term election run in 2015 sparked violence which left at least 1,200 dead and pushed 400,000 to flee the country.

Ndayishimiye is set to inherit a deeply isolated country, under sanctions and cut off by foreign donors, its economy and national psyche damaged by the years of political violence and rights violations.

The election was conducted with scant regard to the coronavirus outbreak -- which has been largely ignored -- and on top of a potential public health crisis, the opposition looks set to contest the outcome of the election.

No foreign observers were allowed in to keep an eye on the election process.

Rwasa, the main opposition candidate, has already alleged foul play, saying initial numbers which showed his CNL party heading for a bruising defeat were a "fantasy".

The veteran politician attracted large crowds throughout his campaign, and observers said he may reap the benefit of a populace exhausted by the CNDD-FDD's rule.

The CNL has alleged the stuffing of ballot boxes, proxy voting, intimidation, and said its polling agents were arrested or booted out during voting and counting.

However Rwasa has already hinted he would not take to the streets in protest and would appeal to the Constitutional Court, though he considers the process imperfect.

The commercial capital Bujumbura was calm on Monday, with shops open and only a slight increase in the visibility of security forces.

A high-ranking member of the ruling party, who spoke on condition of anonymity, said the party had urged its supporters to remain calm.

"The message was to remain calm and vigilant ... not to provoke and that when the time is right the party will tell us when to celebrate our victory."

The election commission has yet to respond to the fraud allegations, but Pierre Nkurikiye, the spokesman for Burundi's public security ministry, accused members of the CNL of attempted fraud, confirming some of their members were arrested for minor incidents.

A foreign diplomat in Burundi, speaking anonymously, expressed strong doubts about the official result but said it was not surprising.

"We were expecting it to happen like this. Nobody could imagine for a second that the CNDD-FDD and its generals would cede power in any way," the diplomat said.

Burundi, which the World Bank ranks among the world's three poorest countries, has been under sanctions from its major donors since 2015, when Nkurunziza's decision to run for a third term as president triggered violent unrest and political chaos.

Agathon Rwasa, the presidential candidate of the main opposition party, the National Congress for Liberty (CNL). By - (AFP)

Burundi is tightly controlled by the ruling party and its youth wing, the Imbonerakure, have been accused of a forceful crackdown against the government's critics in the aftermath of 2015.

State security forces have been accused by rights groups and the United Nations of crimes against humanity and severe rights abuses such as torture, disappearances, sexual violence and executions.

Observers have noted it is unclear whether Ndayishimiye would be able to rule free from interference by Nkurunziza, who in February was elevated by parliament to the rank of "supreme guide for patriotism" and will remain chairman of the party's highly influential council of elders.

The final election results will be declared by the Constitutional Court on June 4.