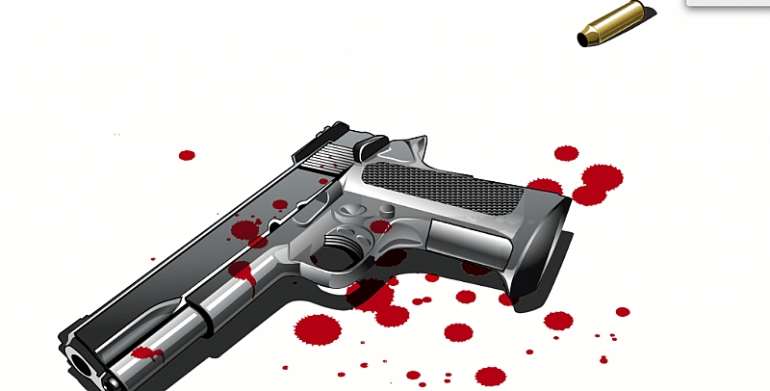 A man has died after he was shot multiple times on Sunday, May 24 at Spot M near Ofankor in Accra.

According to police, the deceased was brought to the police station unconscious by some persons around 1:45 pm.

The complainant alleged that the deceased had been shot by his landlord for refusing to vacate a room rented out to him.

The deceased was rushed to the hospital but was declared dead on arrival.

A visit to the crime scene resulted in the discovery of a pool of blood and four spent shells at the entrance of the main gate of the rented apartment.

“The former reported that on the same day at about 1:33 pm, victim’s landlord, Victor Stephen Nana Kankam shot the victim for refusing to vacate a room he rented from him. Police rushed the victim to Police Hospital, but he was pronounced dead on arrival,” the police said in a statement.

“The district commander DSP MR. George Asare and his team proceeded to the scene of the crime at Spot M and saw a pool of blood at the entrance of the main gate of the deceased’s rented apartment. Four spent shells were retrieved at the scene,” the police added.

Two pump action guns loaded with ammunition were retrieved from his house.

Police say he is being held in their custody to assist in further investigation.

“Police again proceeded to suspect Victor Stephen Nana Kankam’s residence at Spot M, Ofankor and got him arrested. A search was conducted in his room and two pump action guns loaded with 7 and 8 rounds of cartridges each and 32 live cartridges were retrieved. The suspect is however detained for further action. Two pump action guns, four spent shells, and 47 live cartridges retained,” the police statement added.

The body of the deceased has been deposited at the Police Hospital mortuary for preservation and autopsy.