Asokwa Will Get PM Despite Human Impediments—MCE Assures 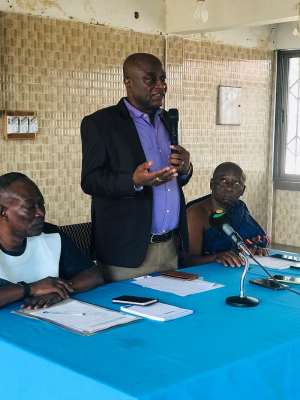 The Chief Executive Officer for Asokwa Municipal Assembly Chief Akwannuasah Gyima has pointed the division among elected Members of the Assembly as the bane for getting a Presiding Member there.

He said even though the Elected Assembly Members had suggested earlier that they wanted one of them to be Presiding Member, they could not present a unified person leading to a shameful delay in the search for a worthy PM.

Speaking to this journalist on the several failed attempts to elect a PM, the calm-speaking Chief Akwannuasah expressed hope they would get one soon.

He said some leading members of the assembly and himself were quite surprised to have seen two elected persons vying for the position at the first and second elections; showing clearly their front was divided.

‘’It was therefore not surprising a government appointee showed up to contest at the 3rd and 4th meeting because he seemed to have realized that there was disunity among the elected members’’, the Asokwa MCE posited.

The Asokwa Assembly is one of some new assemblies carved out of the Kumasi Metropolitan Assembly by the ruling New Patriotic Party.

Just like other new assemblies, they sought to elect a Presiding Member (PM) to steer meetings but failed.

Four elections at two meetings earlier on failed to settle the competition between Oscar Riches, assembly member of Old-Asokwa and Bismark Osei-Tutu, assemblyman for the Chirapatre electoral area since neither of them got the two-thirds majority required for one to be declared as PM.

Nana Yaw Wiredu, assemblyman for Ahinsan-Estate electoral area and Dr. Kwabena Boadu, a government appointee had their turn to contest for the position after Oscar and Bismark exhausted their mandatory two chances at four elections and as fate would have it, none of the two also, at four elections, got the required percentages to become PM.

Currently, the Assembly is in court with Oscar Riches on what the latter feels is an unclear directive from the Local Government ACT that bars those who have had two chances at a maximum of four elections from continuing to file for the same position.

Meanwhile snippets of information gathered from the Asokwa office of the New Patriotic Party point to deliberate support from some constituency executives to some of the assembly members to create confusion.

Their motivation as gathered by this reporter is, a dislike for the Chief Executive Officer whom they have sworn to make unpopular before the President of Ghana.

The clean-heart Chief Akwannuasah however intimates that the assembly has not given up on negotiations and consensus-building efforts to win all assembly members to one side in order to get a PM.