It’s A Feeling Of Exoneration, Happiness And Joy When Marijuana Was Legalised In Ghana-Blakk Rasta 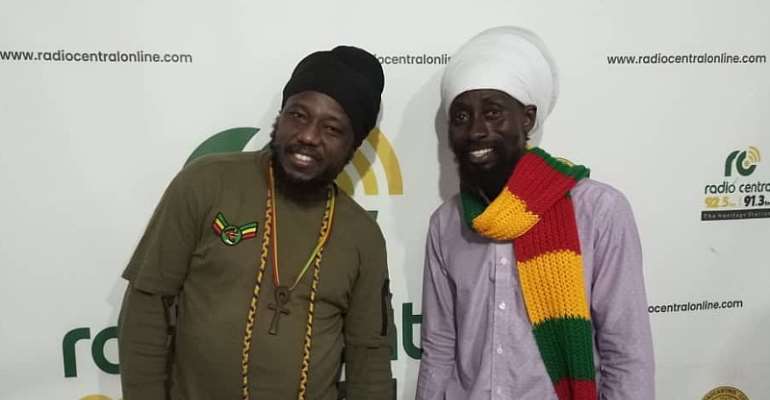 The Zylofon FM radio personality and reggae musician Abubakar Ahmed popularly called Blakk Rasta has said that, the day the parliament of Ghana passed a law legalising marijuana for industrial use was the day he felt exonerated, happy and joyful.

The reggae musician who also describes himself as a freedom fighter, lecturer, poet, Pan Africanist and a vegetarian (vegan type) in responding to how he's able to combine all these responsibilities said "in life one must add to one to make two but coming on Radio especially with the kind of show I host which is not one that you just come and play music and walk away. It deals with intellectuallity" and that isn't easy at all.

He was speaking to Original Ras Kofai on GBC Radio Central's show "Joy in the noon day" today Saturday 29th May, 2020.

When asked how he felt when the news broke out that Ghana had legalised marijuana for industrial purposes, he said "I felt exonerated and I felt that yeah, this man hear is far, far away from the present generation". Just yesterday the MP for Lambusie, Edward Derry called me and said that I was angry the day that marijuana was legalised".

According to Blakk Rasta, the MP now feels the parliament of Ghana is being hypocritical because some of its members ridiculing him when he called for the legalisation of same in 2015. But, in 2020, what Blakk Rasta proposed to be done has come to fruition.

He added that now "it is a feeling of exoneration, happiness and joy and for everyone who believes in herb."

Recounting his music journey so far, the poet Blakk Rasta explained that, he started singing other people's song in 1995 but started recording his own album in 1999 and that came out in 2000 called "The Rasta Shrine" with songs such 'slave master', Rasta carry on' and a host of other good songs on the album.

"From 2000 up till now we have eleven crazy albums and the last one came out only in November and that was Timbuktu my road," he narrated.

"Well, in this times, when you read the book of Jeremiah and read some other books you would get to know that it is time for Jah to pour his spirit on his people that our old, old men shall dream dreams and our young men and women shall prophesy and those times are now".

He said this when answering a question as to whether he was a prophet or not because he composed a song for Barack Obama and he latter became president.

He further explained that some people have made prophesy so weird as one has to go to a shrine or mountain to be able to get" but in his view "Jah Jah created us in his own spirit, in his own image and so He has poured unto us His spirit so that we can look at people and tell or foretell what is going to happen".

He continued that it was with that same spirit and feeling when he received and did the song 'Barack Obama'. That brought him to Ghana as the first African country he visited when he became president of the USA. "I met Barack Obama, we ate and we drank".

Expatiating on how he writes his songs, the radio personality said all his songs are inspired by Jah and that he never attempts writing any song without inspiration. "I write a song because Jah tells me to write a song and before I write a song He has already put the song there".

He ended his interview by thanking all persons who have helped him along the ladder of life and also thank Radio Central for the opportunity given him to speak on a wide range of issues concerning his career.

He added that the songs on his new album are available on all the digital shops and also all shell shops across the country. "32 crazy tunes pon it and you can pick this up in any shell shop in Ghana".

Ghana Back To HIPC Not True – Oppong Nkrumah
15 minutes ago

Allowance For Workers Who Lost Job Due To Covid-19 — Mahama ...
27 minutes ago