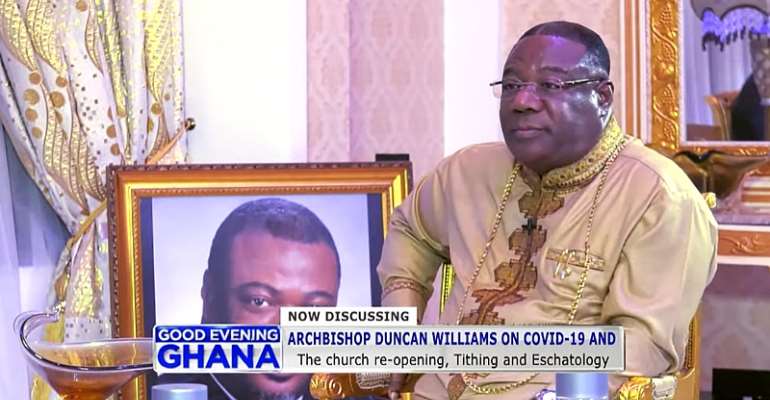 I watched with disgust the interview Paul Adom Otchere had with Duncan Williams regarding tithing on Youtube . It was all balderdash, and the archbishop got away with it because Paul did not know the pertinent questions to ask him. Among other things that were superfluous, Duncan Williams claimed that, "it's the tithe alone that gives God the authorization to rebuke the devourer," as if God needs payment for anything He gives or does for us. Has not the Lord already blessed us with every spiritual blessing in Christ, without any offerings or sacrifices or "tithes" (Ephesians 1:3)?

This promise to rebuke the devourer in Malachi 3:10-11 has been taken out of context by tithing proponents and twisted "out of covetousness, and with feigned words, making merchandise of you" (2 Peter 2:1-3).

You see, these preachers have come up with all kinds of excuses for collecting the "tithes," and none of them is either biblical or relevant. For generations, many preachers and denominations have been preaching "tithing" as a way of supporting the church. What they don't know is that "tithing," as practised today, is not biblical at all!! It has no semblance at all to the way it was practised in the Bible, nor is it required of believers today. Yes, believers are to support the church and ministries, but are to do so "willingly and cheerfully, according to their means, according to how the Lord has blessed them, for God loves a cheerful giver ( Deut 16:17; 2 Corinthians 9:6-8). Telling believers that they must "tithe" in order to be blessed is untrue and not biblical! Abraham was already a rich man before he "tithed" to Melchizedek. He did not become rich by tithing but became rich because God promised to bless him.

I've already written several articles exposing the lies of "tithing" today, as far back as 2013, and I should have expected Duncan Williams and others like him, to repent from robbing and stealing from the people, but regrettably they continue to do so, and the judgment of the Lord awaits all those who pervert the word of God, if they don't repent. For more understanding of "tithing," you can check here: https://www.smashwords.com/books/view/359816