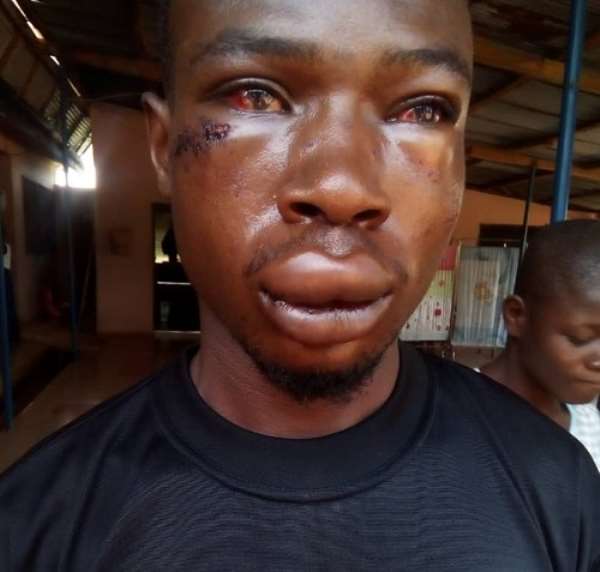 The UEW student who was brutalised by a CID officer for chasing his girlfriend has petitioned the Police Administration to investigate the matter.

Detective Corporal Antwi attached to Donkro Nkwanta in the Nkoranza South District Police Command in the Bono Region accused Hayford, a native of the town and a student of University of Education, Winneba, (UEW) of flirting with his girlfriend whom he has a child.

Hayford has petitioned the Nkoranza South District Police Command and the Commission on Human Rights and Administrative Justice (CHRAJ) for necessary action to be taken against the CID man.

The petition presented on behalf of the family of Hayford by Baffour Akoto & Associates Legal Practitioners and Barristers asked the Police Administration to ensure the case is fully investigated by neutral persons to ensure justice, fair play and the necessary redress addressed or face court action.

They said they were filing the petition because of the “lackadaisical attitude of Donkro Nkwanta Police Station, where the detective corporal works as a CID officer, to investigate the matter when the case was reported there by the victim.”

It said the position taken by the station that the victim deserves the assault because he was in the house of the lady in question (Adwoa Serwaa) for an amorous relationship, is unfounded.

According to the petition, the fact that the CID officer after assaulting Hayford took his (student) mobile phone and flushed it and deleted all information on it in an attempt to conceal the truth that Adwoa was the one who first called Hayford to bring her GH¢5 to buy pampers for her baby showed that the station officer called Inspector Martin Adjei and the police were perverting justice.

DAILY GUIDE also learnt that after the Police Administration had received the petition, there was a meeting between the Divisional Police Command and a delegation of the family of the victim to discuss the issue.

According to sources, when the CID man was asked about the issue, he told his superiors that it was a fowl thief he assaulted and not somebody who came to visit his girlfriend.

During the meeting, it was agreed that the police would go for a court order to enable them to get itemized call details from MTN to detect who initiated the phone call between Hayford and the CID man's girlfriend. After the meeting, the family told DAILY GUIDE that if they did not hear anything from the police within two weeks, they would sue the CID man.

Hayford's elder brother used to date the lady at the centre of the issue but broke up with her before the lady dated the police officer with whom she now has a baby.

On May, 7, 2020, at about 11pm, Hayford, who was doing online examination on his phone due to the temporary closure of schools as a result of the Covid-19 outbreak, said he received persistent calls from Serwaa demanding GH¢5 to buy pampers for her baby.

However, the persistent calls from Serwaa were disrupting his work on the phone so he asked her to stop calling him with a promise to go to her house to deliver the money later.

“So, I went to her house at about 11pm and she gave me a chair to sit on. All of a sudden, somebody gave me a hefty slap on my face from behind. I fell down and the person continued to give me hefty blows on the ground till blood streamed on my face, while the lady stood aloof for her boyfriend to brutalize me. I lost my phone in the process. I had to run into the nearby bush to escape death,” Hayford recounted.

Hayford, who suffered multiple cuts on his face, nose, and mouth, is currently nursing his wounds.