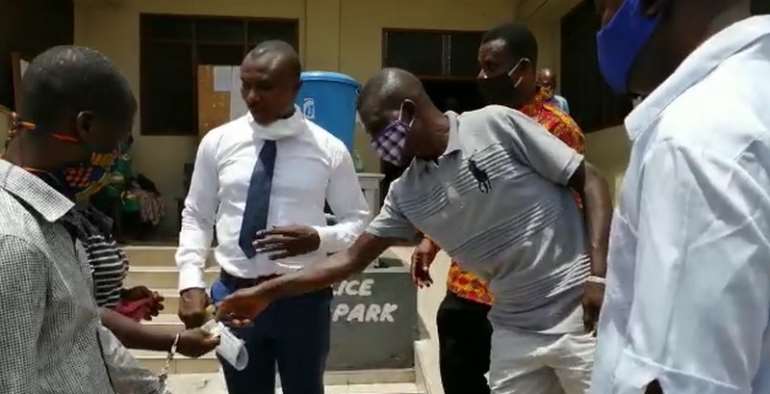 An interesting spectacle unfolded in a court in Kumasi on Friday when a man, whose wife plotted with her boyfriend to kill him, was seen giving cash to his wife.

The suspects were being led away on remand when the man, David Gator, 55, handed the money to his wife, Mavis Brepo aka Maa Adwoa, who is currently on trial with her boyfriend, Patrick Asare.

Mr. Gator was seen in court giving money to Mavis, who allegedly plotted with her lover to have him (Gator) killed. He gave the money to her ostensibly for her upkeep whilst on remand.

The Asokwa District Court in Kumasi had remanded Mavis and Asare in police custody for the second time for attempted murder.

Mr. Gator even assured Mavis of his unflinching support and undying love in spite of her plot to kill him.

He has even said that his wife was under a spell by Asare to commit the crime and was seen comforting Mavis who sobbed as she was being led away.

Mavis and Asare were arrested after they had mistakenly contacted the Manhyia Divisional Police Commander. They were reaching out to the would-be assassin, but they mistakenly telephoned the police officer instead.

The two made their first appearance in court on Friday, May 8 and are expected in court on June 3.

Mr. Gator, a father of three, who lives at Pamen near Kwaben in the Eastern Region, has asked for the charge to be dropped against Mavis because he has long forgiven her and is ready to take her back.

Unknown to the husband, Mavis had secretly been having an amorous affair with Asare for many years.

At a point, the cheating wife and her boyfriend allegedly planned to eliminate Mavis' husband, so that they could have their peace and enjoy their intimate relationship.

Unfortunately, they mistakenly called a number of a police officer, whom they thought was the person they were planning to use to kill the husband and that led to their arrests.

ACP Kwaku Buah, the Manhyia Divisional Police Commander, upon receiving a phone call from the 'wicked' wife and her boyfriend, who had offered to pay GH¢100,000 to get Mr. Gator killed, pretended he was the assassin and followed every step of the accused persons.

With the help of undercover police investigators, ACP Buah told the cheating wife and boyfriend that he lived in Sefwi in the Western North Region.

He constantly talked to the suspects on mobile phone, giving them an assurance that he would easily eliminate Mr. Gator for them.

After negotiations on phone, which lasted for about four weeks, had been successfully concluded, the ACP supposed assassin lured Asare to meet him in Kumasi, so that he could lead him to the exact location of Mr. Gator in the Eastern Region to kill him.

Asare, who was bent on making sure that Mr. Gator was killed, proceeded to Kumasi where he was nabbed. Later on, the suspect led the police to arrest Mavis. In their caution statement, the suspects admitted conspiring to kill Mr. Gator.

Akufo-Addo is confused over MMDCEs appointment – Ho Central ...
43 minutes ago