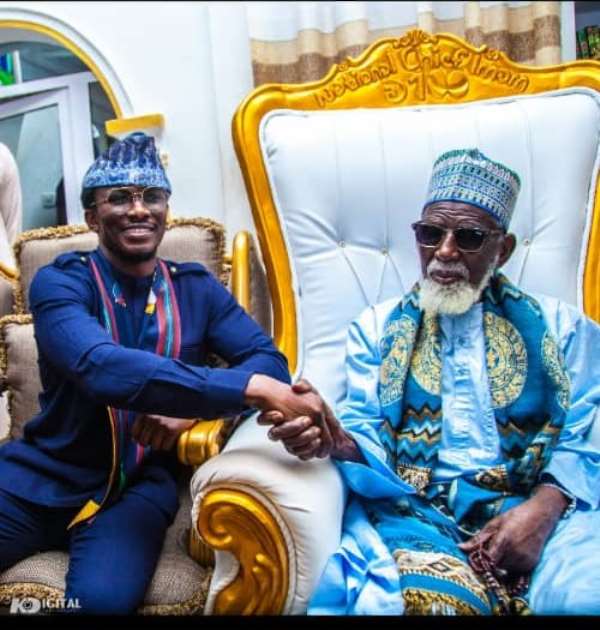 The President of Freedom Movement and the CEO of Kwarleyz Group, Freedom Jacob Caesar popularly known as Nana Kwame Bediako has paid a courtesy call on the National Chief Imam, His Eminence Sheik Osman Nuhu Sharabutu at his residence in Accra, as a gesture in recognition of the significance of the last ten days of Ramadan.

During the last ten days of Ramadan, Muslims around the world seek to observe Laylat Al Qadr (The Night of Power). Muslims also get ready for Eid Al Fitr.

Prophet Mohammad (PBUH) said Laylat Al Qadr occurs during the last ten days of Ramadan, but it is highly speculated that it is either on the 26th or 27th night of Ramadan.

What makes Laylat Al Qadr special is that it is supposed to be the night when the Quran was revealed to Prophet Mohammad (PBUH). This night also has an entire surah (chapter) dedicated to it in the Quran.

He also commended His Eminence Sheikh Osman Nuhu Sharabutu for being an epitome of peace through his leadership and proactive steps to resolve major conflicts in the country.

The revered National Chief Imam, who recently turned 101, on his part, expressed gratitude for the gesture from Nana Kwame Bediako and his team for the good works towards the fight against COVID-19 following which he said special prayers for him and his team as well as the rest of the nation.

He finally donated an undisclosed amount of money, as well as several bags of rice, boxes of tin tomatoes, liquid soaps, etc to chief imam as support towards the celebration of this festival.

According to the Chief Imam, “Islamic Religion recognizes multi diversity and the complementary role each group plays in ensuring peace in the country.” He also stated that Allah has favoured Ghana as a country.

The Chief Imam expressed his willingness to support Nana's mission 'creating a New Africa by adding value and stability to local communities'.