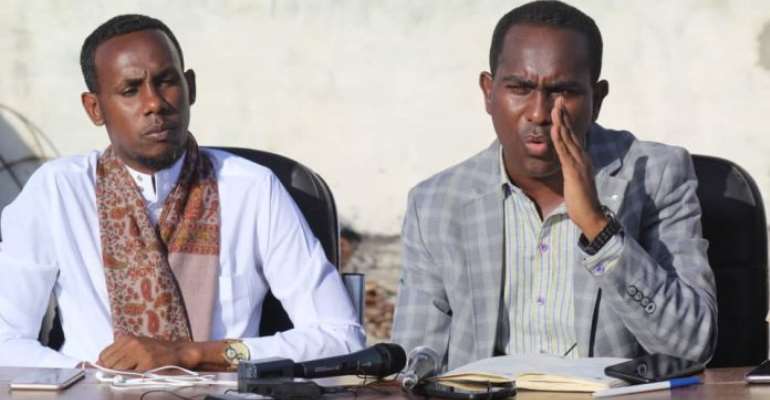 MOGADISHU, Somalia 22 May 2020- Somali Journalists Syndicate (SJS) and Somali Media Association (SOMA) jointly condemn the physical assault against SBC TV journalist, Abdullahi Mohamed Sheikh on Thursday by Hamar Jajab police commissioner and we express our concern by the measures to block the journalists from pursuing legal redress whenever they are assaulted by the police or government officials.

During a press conference in Mogadishu, SJS Secretary-General, Abdalle Ahmed Mumin, and SOMA Secretary-General, Mohamed Abduwahab Abdullahi strongly condemned the move to summon journalist Abdullahi Sheikhdon and one other journalist who witnessed Thursday's assault by the Mogadishu police on Thursday midnight in an attempt to frustrate the journalists' quest for justice.

“We condemn the acts of violence against journalist Sheikhdon on Thursday in Mogadishu by a high ranking police officer, and also express our deep concern by the police attempts to deprive the journalists' rights by pressuring and intimidating them in order not to seek legal remedy,” Abdalle Ahmed Mumin, SJS Secretary-General said.

It is a worrying trend that police and state officials have continuously blocked and even forced to recant statements of complaints from journalists seeking justice for their rights against the police or government officials.

It is the responsibility of the Somali Government to ensure that civil and human rights are preserved and protected for each individual including the right to access to justice regardless of their profession, and journalists are not exempted from seeking legal redress whenever they are assaulted by the police or state officials.

“We call for the police and the Attorney General to allow that complaint cases brought by journalists and media houses pass through proper legal procedures without any interference. Nobody is above the law. Even if the accused is a high ranking police officer, there must be fair treatment of justice,” Mohamed Abduwahab Abdullahi, the Secretary-General of SOMA said. (END)