2020 Polls: With Or Without New Register Mahama Will Win – Ackuako Assures NPP 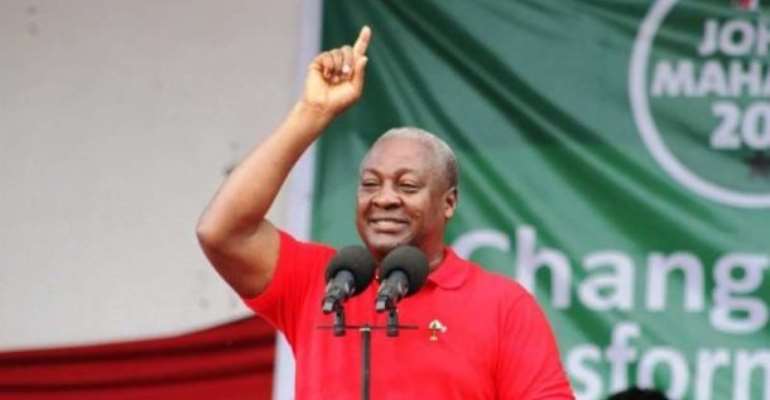 A parliamentary candidate of the National Democratic Congress (NDC) in the Bortianor-Ngleshie-Amanfrom constituency, Mr Alexander Ackuako, has said former President John Dramani Mahama will win the 2020 elections even if a new register of voters is compiled.

He said voters will recollect the good records of Mr Mahama, especially in the health sector, and reward him with a second chance.

Although he described plans by the Electoral Commission (EC) to compile a new roll for this year’s polls as baseless, he said on the Ghana Yensom show on Accra 100.5FM that the NDC will surmount any rigging plan by the governing party, and win the presidential and parliamentary polls.

“Let me tell the NPP and the EC that with or without a new register, John Mahama will win the elections,” he said, adding: “I honestly don’t know why the EC wants to change a register that is faultless”.

For his part, Mr Gyasi Appiah, a communicator of the governing New Patriotic Party said the current register is flawed and must be changed.

He said the register is not fit for purpose.

The EC recently published safety measures to observe during its planned registration exercise amid the COVID-19 pandemic.

Meanwhile, the Director of Elections of the NDC, Mr Elvis Afriyie Ankrah, has said up to 93 per cent of eligible voters in the Upper East and Upper West regions of Ghana will be disenfranchised should the EC go ahead and rely on the Ghana card and passports as the only primary documents for registering people for the issuance of new voter ID cards,

According to Mr Afriyie Ankrah, the quest by the EC to register 18 million eligible voters within 40 days as the coronavirus pandemic ravages on, is impractical.

The EC has laid a Constitutional Instrument before Parliament seeking to make passports and Ghana cards the only primary documents that any eligible voter can use for registration for the voter ID card.

Speaking at a press conference on Thursday, 21 May 2020, Mr Afriyie Ankrah, however, said: “Only about 6.5 million people have access to the NIA card”, so far, and, therefore, wondered how the remaining several millions of eligible voters can be registered for the new voter ID card when they have no Ghana card.

“The NIA could not dispute our claim that only 5.17 per cent and 6.36 per cent of the registrable population in the Upper West and Upper East regions, respectively, have been issued Ghana cards, as we speak.

“So, Upper West, Upper East, Northern, Savannah, North-East, you look at the figures, 86 per cent, 84 per cent, 85 per cent and Upper East and Upper West 5.17 per cent and Upper East 6.36 per cent. So, the rest of the ninety-something per cent, what is going to happen to them? Are they not Ghanaians? Do they not deserve to be treated rightly, fairly and justly as anybody else? Do they have to go through the hustle of trying to find people to guarantee for them with all its delays and frustrations?” he asked.

He said the EC’s reliance on the Ghana card for the registration, which, according to him starts next month, will sideline “over 93 per cent of eligible voters in these two regions, which are strongholds of the NDC”.

“So, take note of that because when we speak, they say where is the conspiracy. So, by strange, accidental reason, [in] the strongholds of the NDC, you have a situation where 93 per cent of eligible voters in these two regions would not have access to their cards.

“And they have to resort to the secondary method of vouching as the norm rather than the exception. Is it fair, is it right? Are you creating a level playing field?”

“The big question, therefore, is: why would the Jean Mensa-led EC rely on an identification card, Ghana card, whose issuance is largely incomplete, and fraught with several anomalies and demographic disparities? Why is the Jean Mensa-led EC excluding from the list of registration requirements under the proposed C.I., their own widely available and acceptable voter ID card and rather including the Ghana card, which is currently possessed by just about 6.5 million Ghanaians who are 18 years and above? A card which is currently not accepted by any public, private or commercial institution.

“You go to the banks today; they don’t accept Ghana cards. So, why would they insist, after telling the whole public that they are going to use the old card and then surreptitiously, they go and remove the card and then now insist on a Ghana card, which the majority of the citizens do not have?

“The commonsensical question that is begging for an answer is: why the Jean Mensa-led EC excluded the exiting voter ID card from the list of registration requirements provided under the proposed C.I. Why have they excluded an ID card that has been upheld by the Supreme Court, as the best prima facie of voter eligibility. This is a decided case by the Supreme Court; that is law. When a Supreme Court makes a proclamation, it is akin to law.

“So, is the EC above the law? Can they do whatever they want? And they’ll quote: ‘We’re an independent institution’. [An] independent institution must be within the confines of the law and reason and commonsense. And if you are given power, the Constitution says that power must not be used in an arbitrary manner – Article 298. You must not use that power capriciously, whimsically, arbitrarily, and in a biased manner. Is this not whimsical, arbitrary and biased way of doing things?”

The EC recently said it will observe all the necessary safety measures to curb the spread of the coronavirus pandemic when it begins compiling a new register of voters.

“All stakeholders are hereby reminded that plans are far advanced for the compilation of a new voter register with a new voter management system for the upcoming 2020 presidential and parliamentary elections”, the EC said in a statement on Monday, 11 May 2020 signed by Acting Public Affairs Director Sylvia Annor, adding: “The Commission is, however, sensitive to the current state of affairs due to the COVID-19 pandemic and will abide by the necessary precautions and safety protocols in the execution of its mandate when it deems it appropriate to begin the compilation of the register.”

It further noted: “As stated in Article 36 of the 1992 Constitution, the EC would like to reiterate that it shall not be subject to the direction or control of any person or authority in the performance of its functions, except as provided for in the Constitution or any other law consistent with it”.