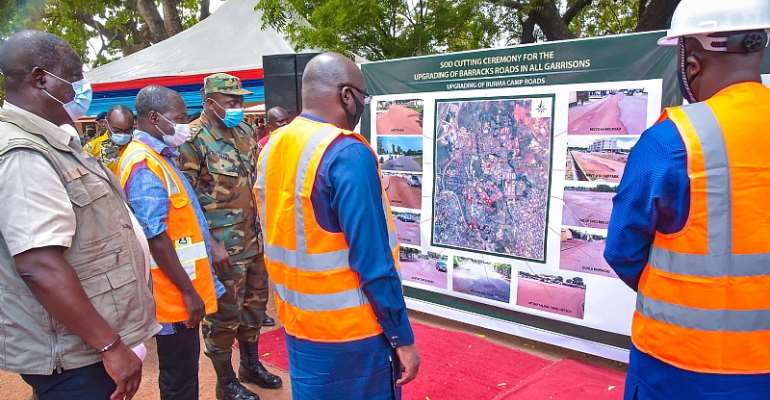 Government’s efforts at building massive, broad-based infrastructure across the country are aimed not just at improving the lives of ordinary citizens but form part of a drive to build a modern, inclusive economy within a fast-growing country, the Vice President, Dr. Mahamudu Bawumia, has indicated.

Speaking at a sod-cutting ceremony for works to begin on the upgrading of inner roads within all the Garrisons of the Ghana Armed Forces across the country on Friday, 22nd May 2020, Vice President Bawumia maintained that while every Government is expected to provide some infrastructure for its citizens, it takes a visionary leader, like President Nana Addo Dankwa Akufo-Addo, to craft and implement policies that ensure holistic national development.

“Apart from roads, the Government is very busily implementing other major pieces of infrastructure across the country in the education sector, health, water and sanitation, aviation, railways, ports and harbours and so on. It is normally said that every government builds infrastructure. That is quite true. But it is not every government that has the vision and the ability to implement groundbreaking policies that will transform and modernize the nation.

“We are not just building roads and infrastructure; we are building a country. We are building an inclusive, modern economy while at the same time reducing the suffering of our people.

“Even though the data shows that there is no first-term government in the history of the Fourth Republic that has built more infrastructure than the government of Nana Addo Dankwa Akufo-Addo, we know, and we have always known, that building infrastructure is not enough; we need to build a nation.

“The record that we have established between 2017 and 2019 is very very clear. We have restored macroeconomic stability, we are putting this country on the road to self-sufficiency in agriculture and we are industrializing this country.”

Vice President Bawumia, who is also Chairman of the Armed Forces Council, re-emphasised the government’s commitment to 2017 to retool all the Services, tackle the accommodation deficit, and upgrade the roads in the garrisons.

“Government is aware of the numerous challenges facing the Ghana Armed Forces including shortages and poor state of accommodation, bad roads in the barracks, obsolete equipment, among others.

“Looking back, the Ministry of Roads and Highways started the rehabilitation of roads within the various barracks in 2016. Among the barracks that benefitted included the Myohaung Barracks and Air Force Base in Takoradi; Uaddara Barracks and Central Command in Kumasi; Kamina and Bawa Barracks in Tamale and Volta Barracks in Ho.

“However, they did not touch the inner roads. Today’s short ceremony is therefore to mark the beginning of the inner roads upgrade. This will ensure that the remaining roads in the barracks have an asphaltic overlay.

“The project is to be replicated in all the Garrisons. This is a demonstration that the government is not relenting on its Agenda of declaring this year ‘The Year of Roads’, even in the face of the crisis of the COVID-19 pandemic facing us,” he stated.

Vice President Bawumia continued, “This important project is not only to ensure that our vehicles are well maintained, but will provide easy access, and also beautify the barracks.” 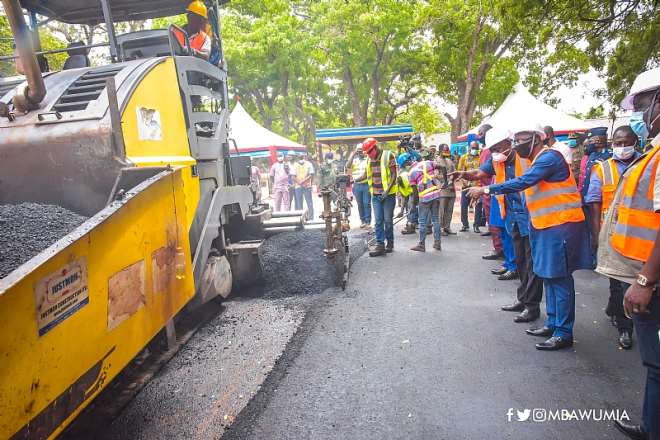 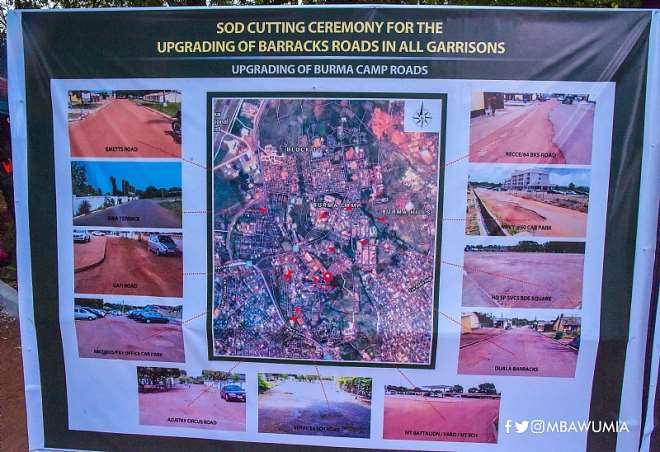