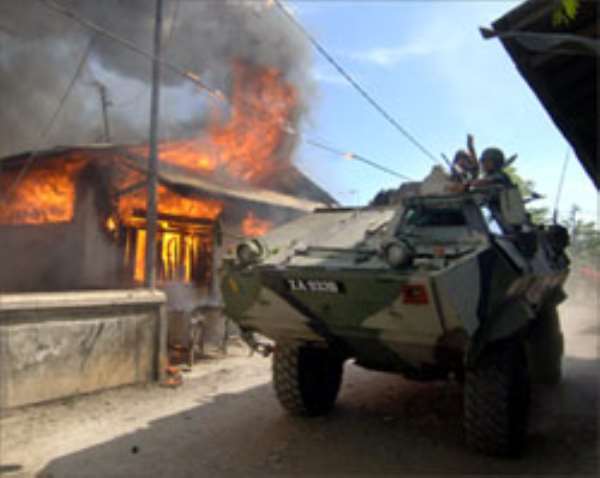 The United Nations is to send peacekeepers back to East Timor and set up a commission to probe a recent wave of violence, Kofi Annan says.

But the secretary-general said a new UN mission would need at least six months to set up.

Annan informed the Security Council of the moves after receiving calls from Dili to establish a new mission with a police force to replace the more than 2,000 Australian-led peacekeepers currently on the ground, and to stay for "not less than one year".

The government also called for a commission to review violent incidents that began in late April and have thrown the fledgling country into crisis.

Annan has asked Louise Arbour, the UN high commissioner for human rights, to set up the panel.

On Wednesday, the country's president said the government had become paralysed and was partly to blame for the violence because it had not been able to resolve the problems that led to the unrest.

In a nationally televised speech, his first address to the country since clashes and gang violence broke out in late April following the dismissal of nearly 600 soldiers, Xanana Gusmao told parliament: "We have witnessed the state become paralysed."

He also said that foreign intervention would "last longer than we have imagined, for several reasons, but particularly [because] there are weapons in the hands of civilians".

In 1999, East Timorese voted for self-rule in a UN-run ballot, triggering a wave of deadly attacks by pro-Indonesia militias.

The United Nations administered East Timor for two and a half years before formal independence was declared in 2002.

The new outbreak of violence has left some - including Annan - questioning whether the UN withdrew too quickly.

"The sad events of recent weeks reflect shortcomings not only on the part of the Timorese leadership but also on the part of the international community in inadequately sustaining Timor-Leste's (East Timor's) nation-building process," Annan told the Security Council.

Annan said dispatching "a larger police and military mission" to East Timor first would require the deployment of an assessment mission, which he said he planned to send very shortly.

"It is obvious that the UN will have to go back to Timor-Leste in a much larger form than we are at the moment," he said.

"I do not expect, in military terms, to see UN forces on the ground for the next six months or so. So I would hope that the countries that are engaged now will help maintain law and order until such time that the Security Council takes fresh decisions."

Annan said the Australians had indicated that they would probably keep troops in East Timor for about six months to a year.

Jose Luis Guterres, East Timor's ambassador to the UN, called for countries in the region to participate in the peackeeping force.

"The current force and its successor, as indeed other components of a new UN mission, should also comprise a greater number of countries in the region," Guterres said, mentioning Fiji, Singapore, Thailand, the Philippines and South Korea.

He said while the emergency was "nearing an end", security remained edgy and "the country is in a politically precarious state".

At least 30 people have been killed and more than 100,000 have fled their homes in the last month. Many people are too frightened to leave cramped and dirty makeshift camps despite the presence of the peacekeepers.