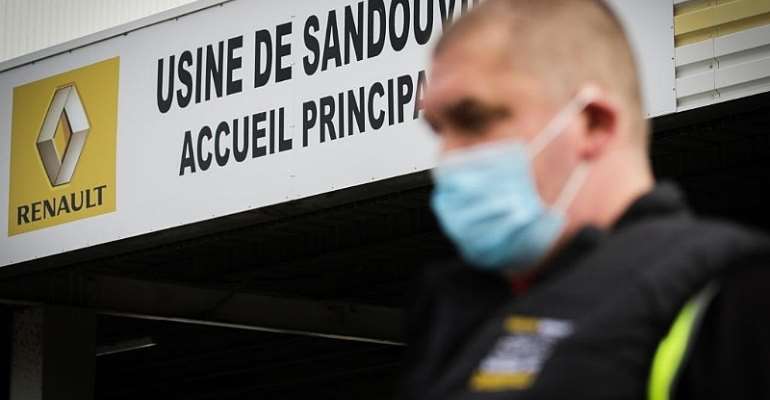 French carmaker Renault has reopened its Sandouville plant in north-western France, after being ordered to close it for not enforcing adequate protective measures in the wake of the coronavirus pandemic. The reopening comes as doubts swirl about the company's future in the economic slump as a result of the disease.

When the factory last reopened on 28 April, a court ruled that the safety measures put in place were insufficient and ordered it to shut the following week.

The case was brought by the CGT union which claimed it had not been properly consulted on the reopening.

One employee told the French radio station Europe 1, he was both relieved to be back at work but also anxious about the future.

Renault is expected to permanently shut three factories in France as it tries to mitigate the economic impact of the coronavirus and subsequent lockdown measures.

Cutting costs
The group will present a cost-savings plan of up to 2 billion euros to the government on 29 May.

The nearly 2,000-strong work force at the Sandouville plant are not facing the axe.

The plants affected include Choisy-le-Roi on the outskirts of Paris, the Fonderies factory in Brittany and the Dieppe plant in north-western France, which together employ over 1,000 workers.

Car makers around the world have been hit hard by the Covid-19 pandemic. Renault in particular was struggling with faltering demand before the coronavirus crisis and looking to cut costs.

Renault, the third-largest automaker in Europe, after Volkswagen Group and PSA Group, is waiting on a 5 billion euro state-guaranteed loan to help it weather the storm.

Domestic production
However, French finance minister, Bruno Le Maire, has warned that government help will not come for free.

"Renault is fighting for its future," Le Maire said in an interview on Thursday with the French daily newspaper Le Figaro.

"I have not yet signed the loan," he added. He said that a bailout would be made once certain conditions were met, notably that Renault should base its high-tech production at home and make France the hub for its electric cars.

The government holds 15 percent of shares in Renault and thus wields a certain level of influence.

Le Maire has told the carmaker that it must keep its Flins plant in the north of Paris open to protect the jobs of 2,600 workers.

It is believed the factory, which produces electric Zoe models and the Micra car for Renault's partner Nissan, will be repurposed for other needs.