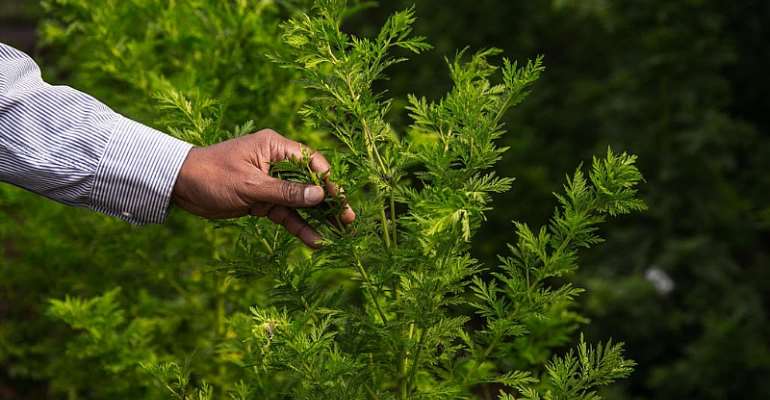 African researchers are raising funds to carry out their own clinical trials on the artemisia plant to investigate its potential for treatment of Covid-19. A herbal tea based on artemisia extract has recently been touted by Madagascar's government as a treatment for the coronavirus.

However, no comprehensive clinical trials on the plant's effectiveness against Covid-19 have been carried out.

“I am cautiously optimistic,” said Frank van der Kooy, a researcher from North-West University, South Africa, who is interested in the reported antiviral properties of the artemisia plant.

Van der Kooy launched a crowdfunding initiative on the BackaBuddy platform, run by a non-profit company based in South Africa, and is aiming for an initial fundraising target of 26,000 euros. The cash raised through crowdfunding will be managed by North-West University.

Artemisia's credentials
Artemisinin, a compound derived from the Artemisia annua plant is used as part of malaria treatments. And Van der Kooy has carried out laboratory tests into artemisia's activity against HIV.

The South African expert, who has long been involved in the analysis of medicinal plants, is teaming up with Jerome Munyangi, a Congolese doctor from the faculty of medicine at the University of Kolweri-Lualaba.

Munyangi has carried out clinical trials in the Democratic Republic of Congo comparing tea infusions of artemisia with a combination treatment using artemisinin.

Munyangi's research, published in the Phytomedicine journal, concluded that infusions of both Artemisia annua and Artemisia afra, another species of the plant, gave better results than the artemisinin-based combination therapies (ACTs).

The World Health Organisation (WHO) has warned that using so-called monotherapies could lead to antimalarial drug resistance.

Breaking down the plant
“Roughly 1,000 unique molecules have been identified in Artemisia annua and about 100 in Artemisia afra,” Van der Kooy told RFI. “We need to determine which of these molecules, such as artemisinin, are important for bioactivity.”

Further chemical analysis on artemisia needs to be carried out before clinical trials, according to Van der Kooy. The herb will be broken up into its separate molecules and tested against the virus in a laboratory.

“You end up with a list of important molecules which need to be present during formulation,” said Van der Kooy, explaining the process of “bioguided fractionation”.

The next stage of formulation involves determining how to put the important molecules into a form that is stable and has a shelf life.

Both Artemisia annua and Artemisia afra will be explored and scientists hope that eventual clinical trials could be carried out in the DRC given the experience of Munyangi's research group.

Trials would ideally take place using patients suffering from Covid-19 receiving treatment in hospital, but that would be further decided during an ethical review process, said Van der Kooy.

The project would use plants being grown at North-West University and the eventual treatment could take the form of a tea. “Ideally it will be a tablet or capsule,” said Van der Kooy, who works at Pharmacen, the university's centre for pharmaceutical sciences.

Going beyond Covid-Organics
The crowdfunding initiative follows considerable promotion of an artemisia-based herbal tea touted by Madagascar's President Andry Rajoelina, calling the Covid-Organics product a cure for the coronavirus.

The Malagasy leader has promoted Covid-Organics to leaders in several other African countries, recently announcing that he would send the herbal tea to Haiti.

On the other hand, the WHO said it has yet to receive any data on using artemisia against the coronavirus, saying there was no basis to claim it was an effective treatment.

South Africa's government said it would assist the authorities in Madagascar. Health minister, Zweli Mkhize, said: "Our scientific research institutions will be willing to support an analysis,” following discussions with Rajoelina's government.

“I haven't heard anything from the government or our funding agencies,” said Van der Kooy, when asked whether South African's health minister had followed through on the promise made about scientifically testing Covid-Organics.

Van der Kooy believes the only way to make clinical trials happen quickly is to enlist public support. “Unfortunately, the wheels at funding agencies turn exceptionally slowly and when funding becomes available, if ever, the world will probably be battling a different pandemic.”