Move to close Guantanamo, US told 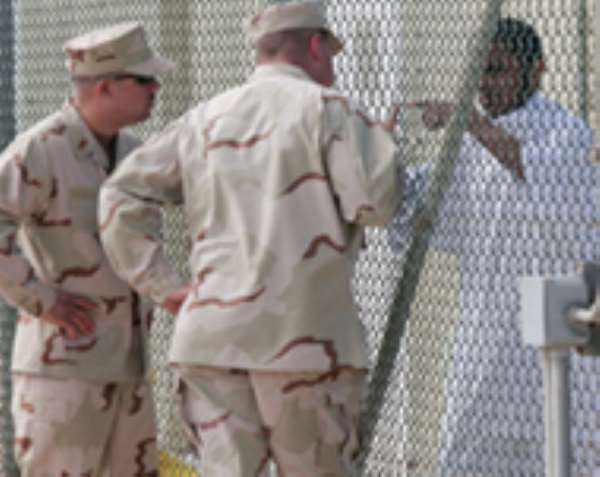 The UN human rights agency has said the US should focus on closing its prison camp in Guantanamo Bay, Cuba.

Jose Diaz, spokesman for the UN High Commissioner for Human Rights, said the most important matter is working out how to close the camp and what then to do with the detainees.

"It's not completely unexpected that this should happen," Diaz said, referring to the suicides of three inmates on Saturday.

"The focus of attention should be on closing Guantanamo."

The European Parliament also renewed its calls on Tuesday for the Guantanamo Bay detention camp to be closed, joining international criticism of the facility after the three suicides - of two Saudi men and one Yemeni - provoked a wave of indignation over the treatment of prisoners at the naval base.

In a resolution, the legislators gave the United States credit for making "significant efforts to ensure that detainees are held in better conditions than before, in particular with regard to medical care, nutrition, the expression and exercise of their religious rights and recreation."

But the resolution also said the United States had not tackled the fact that Guantanamo prisoners are detained arbitrarily and without being tried in a fair hearing by an impartial tribunal.

The EU has become increasingly vocal in urging Washington to close the prison camp in southeast Cuba where about 460 people are being held on suspicion of links to al-Qaeda and the Taliban.

The EU is expected to raise the issue at an EU-US summit in Vienna next week.

Separately, the UN special investigator for torture said in Germany that the Guantanamo prison should be closed this year.

A good opportunity for announcing the closure would be US President George Bush's visit to Austria for the EU-US summit on June 21, Manfred Nowak told German radio station Deutschlandradio Kultur.

"I think that it will certainly be closed this year," he said.

"But I could imagine that the recent suicides in Guantanamo Bay could speed up this decisions process."

Meanwhile, the American Medical Association has said the direct involvement of doctors in prisoner interrogation is unethical and violates their oath to do no harm.

This comes in a new policy by the association stemming from concerns about treatment of detainees at Guantanamo Bay and elsewhere.

"Physicians in all circumstances must never be involved in activities that are physically or mentally coercive. If physicians engage in such activities, the whole profession is tainted," according to the policy adopted on Monday by delegates at the AMA's annual meeting.

They may also provide medical care for detainees, but not if that treatment is conditional on a patient's participation in interrogation.

Doctors who learn of coercive interrogation are ethically obliged to report it to authorities, the policy says.

The measure stems from concerns about military use of psychiatrists and psychologists as behavioral science consultants to help interrogators obtain information from detainees.

Delegates to the nation's largest physician group adopted the policy without debate during their five-day annual meeting, which ends on Wednesday.

The new policy puts the AMA on the same page as the France-based World Medical Association and the American Psychiatric Association, which last month said psychiatrists, who are medical doctors, should not be involved in detainee interrogation.