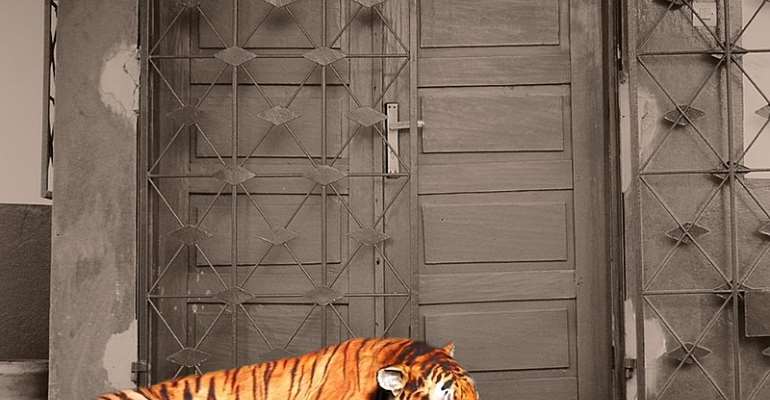 When N'Djamena-based electro band Pulo NDJ found themselves stranded in Abuja with no chance of returning to Chad because of the coronavirus, they made their way to Lomé, set up a home studio and recorded a song about living in lockdown. Their story is one of friendship and remaining creative through the crisis.

Since the release of their acclaimed debut album Desert to Douala in March 2019, Pulo NDJ has spread its inventive blend of traditional Chadian rhythms with an electro beat around West Africa.

In March they were invited by the Institut Français in Abuja to head up DJ-ing workshops and give concerts in Nigeria.

But the coronavirus stopped them in their tracks. With borders shut, they found themselves stranded in Abuja, unable to return to N'Djamena.

“The concert was cancelled and we had to return to Chad but Chad closed its border," said guitarist Stingo. "We got help from friends."

The band headed to his home country of Togo and found shelter at Luc's (aka Lord Kossivi), a member of the HAPE Collective which produced the Desert to Doula album.

They were introduced to the French filmmaker, Marion Poizeau, who was also locked down in Lomé. Together they turned to music as a way of pushing back the walls.

“Luc lent them his home studio, Walid (the keyboard player) had his computer, Stingo his guitar and I lent them a mike,” said Poizeau. “We made do with what we had.”

They began writing and one song - Confinement - talks of what it feels like to be in lockdown.

It's a pensive cream-pop song with a universal message: 'We're all here together, we're stuck, we're in lockdown,' Poizeau sings.

“The idea was to express what we were feeling being stuck together in a house,” said the filmmaker turned backing vocalist.

“Making music was also a big help during this time, to make the time go faster and more enjoyable," she added.

Poizeau made a video for the song showing the five of them trapped inside the house, set against backgrounds of the ocean, grasslands, and an array of untrammelled wild animals.

Making music has allowed them to remain positive and break the feeling of social distancing.

“We did this to share what's happening here and to share the way we met and created together," Poizeau said. "So even if it's a crisis we can still be creative and produce something positive. I hope we can share our positive idea of keeping making music with the rest of the world.”

Lockdown is having a devastating impact on musicians, not least in Lomé where the night-time curfew has deprived them of the bars and music venues they would usually play in.

“It's tough, there's no more work, bars are closed and people can't gather more than 10 at a time, so weddings and everything is stopped,” said Poizeau. "And what's difficult is not knowing for how long it will last. We're all victims of the situation but for artists it is definitely a hard time.”

The band hopes to earn something from digital sales of the song Confinement, but the toll of lockdown goes beyond money.

“It's logical that when you don't work you don't earn money,” said lead singer Samy aka Gari Boy. “But over and above that, your spirit feels empty when you're not able to give pleasure, to share and have exchanges with others.

“Music is the only thing we know how to do. Not having the means to make other people happy leaves you feeling diminished. It's disturbing.”

While they wait to be able to perform in public again, the band's makeshift studio in Lomé is where it's at.

“We set out to record one song, Confinement, but it's turned into an album,” said Poizeau. "It'll be the lockdown album."

Songs include the up-tempo Mushendo - an ode to the fuller-figured woman - sung in the colloquial Aoussa language from Cameroon.

And Woezon meaning “welcome” in the Mina language from Togo.

“It's about welcoming a newborn but could also symbolise the birth of our album,” Poizeau explained.

“We don't know when or how we'll be able to produce and promote the album,” said Gari Boy philosophically. “But we now have a box full of songs!”