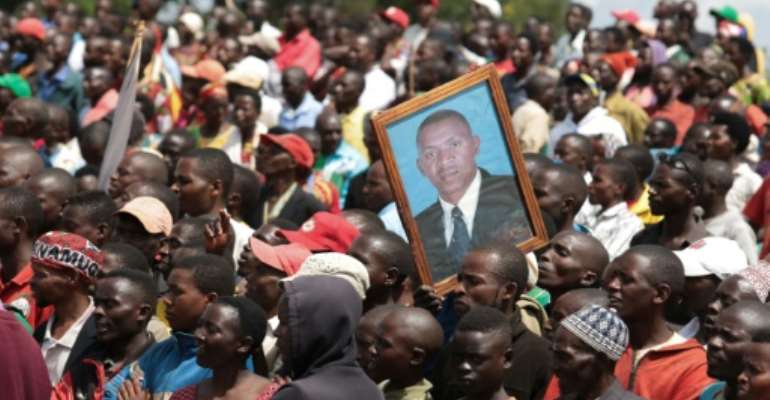 Rwasa said tallies done at polling stations clearly showed his opposition CNL had the lead over the ruling party. By - (AFP/File)

Burundi's main opposition leader has rejected early signs the ruling party is heading for victory in this week's general election, describing the results from 12 percent of municipalities as "fantasy."

"Absolutely I reject these results. These results being declared are a fantasy. They do not reflect reality," said Agathon Rwasa, leader of the National Council for Liberty (CNL), of the results released by state media late Thursday.

Rwasa said tallies done at polling stations on Wednesday clearly showed the CNL had the lead over the ruling CNDD-FDD party and its frontrunner candidate, Evariste Ndayishimiye.

"We can easily demonstrate that this is cheating. These numbers being put out there are simply the result of pure manipulation," he said.

"We have won -- whether in the presidential, legislative or local elections. We have the results to prove it."

The election was generally calm but proceeded with scant attention paid to the coronavirus pandemic. By - (AFP/File)

In one case, the ruling party captured three-quarters of votes in the opposition stronghold of Kabezi, one of Burundi's 119 municipalities. The CNL attracted just under one quarter.

Both sides alleged fraud in Wednesday's election, which was generally calm but proceeded with scant attention paid to the coronavirus pandemic.

The election commission earlier Thursday had called for calm, saying it would take several days to collect and tally all the votes at official counting centres, and warned against reading into early and incomplete results.

More than five million registered voters were asked to choose between Rwasa, Ndayishimiye, and five other candidates for president, as well as elect their lawmakers and local officials.

Ndayishimiye is the hand-picked heir to President Pierre Nkurunziza, whose 2015 bid for a third term unleashed violence that left at least 1,200 dead and saw 400,000 others flee the country.

Nkurunziza announced he would not run again after 15 years in power, a time during which his party was accused of serious rights abuses and Burundi became increasingly isolated on the world stage.

The campaign was marked by violence and arbitrary arrests, and the CNL said several of its officials were harassed on voting day.

The party also alleged there had been incidents of proxy voting, people voting multiple times and the voting cards of absent voters being redistributed to ruling party electors.

Evariste Ndayishimiye, presidential candidate of the ruling party, is the frontrunner in the election. By - (AFP/File)

The election commission has yet to respond to the charges.

However Pierre Nkurikiye, the spokesman for Burundi's public security ministry, in turn accused members of the CNL of attempted fraud, confirming some of their members were arrested for minor incidents.

The election commission said the final results were expected Monday or Tuesday after ballot boxes had been secured and votes counted from more than 3,800 polling stations across the country.

Chereponi: I’m humbled by this opportunity to serve — DCE no...
31 minutes ago

Ablakwa to file two urgent questions again over cost of Akuf...
40 minutes ago