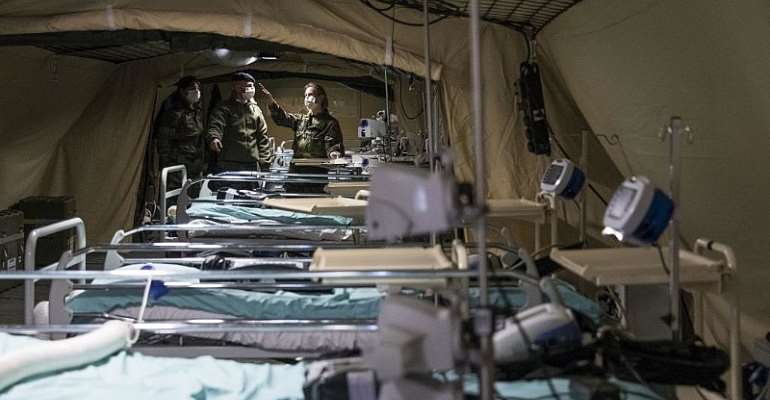 A military field hospital in eastern France set up to relieve the strain on emergency rooms, has been dismantled and deployed to the overseas department of Mayotte, which is facing an uphill battle against Covid-19.

As the coronavirus crisis eases and permanent hospitals in France are able to better manage the load, a field hospital in Mulhouse in the country's east has begun scaling back its operations.

Out of the structure's 30 beds, ten comprising ventilators and intensive care units, have already been dismantled.

Another 20 beds remain operational, with a dozen currently occupied by patients on life support.

Set up in March by the army to treat severe coronavirus cases, the construction of such a facility during peacetime was unprecedented.

The tent hospital was built in a parking lot next to the main hospital in Mulhouse in the Haut-Rhin region to relieve the strain on emergency rooms that were badly hit by the coronavirus.

Hundreds of patients were also evacuated from the region, either airlifted over the border to Germany, Switzerland, Luxembourg or Austria or transferred via special high-speed trains to other regions of France.

Crisis overseas
Nearly two months on into the pandemic, the nationwide death toll has begun to go down, although health officials have reported eight new Covid-19 clusters in the Grand-Est region since the lockdown was eased on 11 May.

However, no new patients have been admitted to the Mulhouse military field hospital officials say, which is why they are now focusing their attention on the growing coronavirus threat in France's overseas territories.

"Ten intensive care beds will be deployed to Mayotte hospital and will be transferred in two rounds by an Airbus A400M carrier," Florence Parly, France's Minister for Armed Forces has said.

France's Overseas Territories Minister Annick Girardin visited the Indian Ocean island on Tuesday and warned that the coronavirus pandemic risks being even more grim there than on the mainland itself.

Time running out
Mayotte, like much of the “Outre-mer” or overseas departments, suffers from high poverty and unemployment rates and there is concern that local hospitals and clinics could be overwhelmed if the number of cases rise further.

Two helicopter carriers— the Mistral and the Dixmude —are being sent to the Caribbean and the Indian Ocean to shore up the health sector. The transfer of the Mulhouse military hospital to Mayotte follows this trend.

However, for Mayotte's regional health director Dominique Voynet, time is "running out" for the archipelago, which he reckons needed "the measures deployed in Alsace two months ago."