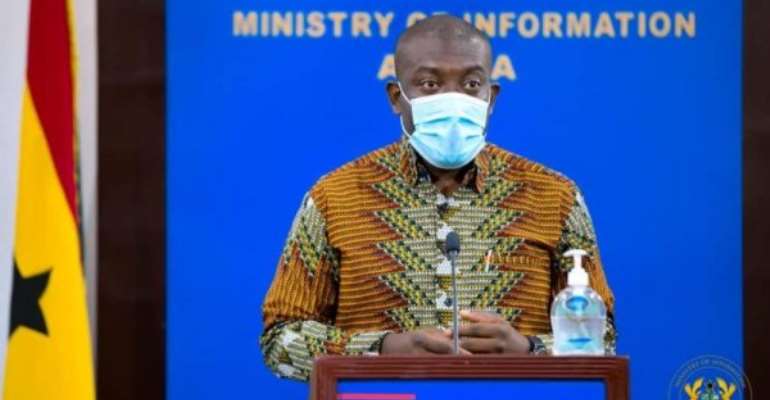 Director-General of the GHS, Dr Patrick Kuma Aboagye said about 11 out of the 16 regions had not recorded new infections since the country's last update.

He explained that from the last update between May 18 and May 19, 2020, a total of 173 new cases of COVID-19 were recorded, of which the Greater Accra Region accounted for 46, Central-27, Eastern-6, Ashanti-35, and Western-57, leaving the remaining regions with no new records of infections.

This, he said, brought Ghana's cumulative number of COVID-19 count presently to 6,269, cases, out of which there were 31 fatalities, who were made up of 17 males and 14 females, with the Greater Accra Region alone recording 20 of the total number of deaths.

Dr Kuma-Aboagye, giving an update on Ghana's COVID-19 case count and management at the Ministry of Information's midweek press briefing in Accra, stated that there were 144 more recoveries over the same period, bringing the current cumulative number to 1,898, an indication of a recovery rate of about 30.2 per cent, with only eight persons currently in critical condition.

He said, Ghana did 187,929 tests from both routine surveillance, contact tracing on persons under mandatory quarantine in their first testing, and achieved 6,269 on a follow up testing of the total number, showing a positivity rate of 3.34 per cent.

He said a large pool of people were currently still waiting for their second test results, which would mark their final certification of total recovery from the infection, and hoped that within the next few days the results would be released for them to be free.

Dr Kuma-Aboagye said on case management, all the 16 regions had identified and set up isolation, quarantine and treatment facilities.

He said there were a total of 71 treatment and isolation centres of which 50 were functional, as the other areas did not record any case.

He said the largest isolation centre, which was the Pentecost Convention Centre had 251 persons there, which was a reduction from the over 450 that were recorded since the setup of the place for holding people who had tested positive to COVID-19.

According to the Director-General, the number of admissions in all other isolation and quarantine centres at both regional and district levels, witnessed decreases in the past week, including; the initial total of 31 critical cases that were managed in various Intensive Care Units (ICU), where six persons with critical underlying conditions died.

He said there were only eight persons still in the ICU ; four of which were at the University of Ghana Medical Centre, and two each at the Ga East Municipal Hospital and the Korle-bu Teaching Hospital, but the remaining 16 persons had already been discharged.

The Director-General said, notwithstanding the slight decreases in the number of new positive cases, there were occasional increases in strategic areas such as; in the Obuasi, Tema and Bibiani incidences in the past two weeks.

However, the GHS has strengthened its forces to be able to identify the hotspots and contain the situation, to present possible spread of the virus.