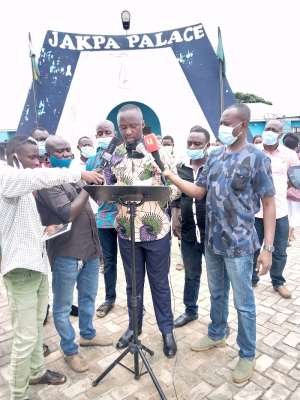 The National Democratic Congress (NDC) in the Savannah Region today 21st May, 2020 stormed the Palace of the King and Overlord of Gonja Yagbonwura Tuntumba Boresa (I) at Damongo the Savannah Regional capital to present a two page petition.

Addressing the media after presenting the petition to the Paramount Chief of the Kusawgu Traditional Area of Gonja on behalf of the Yagbonwura, the NDC Communication Officer Mr Malik Basintale said they presented the petition so that the Yagbonwura will put President Akufo-Addo to order over the 5 years sentence of a revered Chief from the area Dinipowura Alhaji Osman Salifu Mimina and the neglect of the Savannah Region.

Mr Basintale said a Chief from the Kpembe Traditional Area of Gonja was politically persecuted on a so called causing financial loss to the state laws.

He said President Nana Akufo-Addo should have respected the customs and traditions of the Savannah and not have allowed the chief to be jailed. “I don't think this can happen to a Chief in any part of this country,” he said.

The NDC Communication Officer said there were procurement breaches involving some of government appointees but that President Nana Akufo-Addo ignored.

“We have been in this country where persons were guilty of financial loss to the state including the CHRAJ case of Ken Ofori- Atta who is a nephew to President Akufo-Addo, the 2.25 Billion dollar Bond, the Kelvi GVG of Ursula Owusu, Pious Hadzide’s Australian Visa scandal and lots of Procurement breaches that caused financial lost to the state,” he stated.

The NDC Communication Officer also said ever since President Akufo-Addo assumed office, not even a single project has been given to the Savannah Region and that anytime calls are made the NPP either say they created the Savannah region or gave a signboard of the Region.

He said President Nana Akufo-Addo has swerved the Savannah Region in the list of 88 District hospitals to be built across the country.

Mr Basintale said the President categorically stated he was giving the Savannah Region 3 new District hospital but the area was conspicuously missing in the list.

Below is a statement issued by the NDC in the Savannah Region today 21st May, 2020 after presenting the Petition to Yagbonwura:

PETITION TO DEMAND ANSWERS FROM PRESIDENT NANA AKUFO-ADDO ON THE POLITICAL PERSECUTION AND CONVICTION OF A GONJA CHIEF, DINPO-WURA OSMAN MIMINA AND THE NEGLECT OF THE SAVANNAH REGION IN THE LIST OF PROPOSED 88 HOSPITALS.

We write as members of the National Democratic Congress and stakeholders of the Savannah region, petitioning your high office, the mighty Jakpa Palace and your Majesty to demand answers from President Nana Addo Danquah Akufo-Addo on two major issues that has largely affected the dignity of the region and have brought us into near disrepute.

First, is the political persecution by President Akufo-Addo and the New patriotic party and the disrespectful sentence of a Gonja chief, Dinpo-wura Alhaji Osman Mimina Salifu without respect to our traditions and customs. A noble man, enskinned by the Gonja kingdom as a chief due to his highly respected profile, A man who brought development, supported generations and contributed immensely to the progress of the Savannah region because he was recognized and rewarded from the Gonja kingdom as deputy national security coordinator by H.E John Dramani Mahama.

Your Majesty, We pray your high office to demand answers from president Akufo-Addo on why he disregarded the dignity of our tradition but instead focused on the cheap political perspective of this matter.

Your majesty, we pray your high office to demand answers from President Nana Addo Danquah Akufo-Addo and the NPP government on why the Savannah Region was left out of the 88 hospitals promised by the President per the list that was released by the local government and rural development ministry.

Our petition comes at a time the NPP government has been noted for their wanton neglect and disregard for the people of the Savannah region anytime it comes to the sharing of the national cake.

We note the promise President Nana Akufo-Addo made on the 26th April, 2020 in his address to the world in respect of delivering 88 hospitals across the various regions in country. In his address, the President categorically stated that Savannah Region will be allocated three (3) out of the 88 hospitals promised and further given One (1) regional hospital.

Although we doubt the feasibility of entire promise made by the President since he is noted for gross deception and unfulfilled promises all around the country, we think it is better to be captured in records for future referencing.

To our dismay, the final list of 88 hospitals released came without even a single one allocated to the Savannah Region. When we quizzed, we were told that the government had FORGOTTEN of the Savannah Region, and that follow ups were made to get the matter resolved. We wondered how an oversight could still have the released list tally with the 88 number as other regions had theirs increased to fill the space of our omission.

The second list that came from the ministry after we gave the president a 48 hours ultimatum to as a matter of urgency include the Savannah region to the list was suspicious since the number of hospitals had shot up from the original 88 to 101. To make the matter worse, the promise by the President that Savannah was going to be allocated three (3) and a regional hospital was reduced to two (2). We termed the latter list dated 20th, may 2020, uncertified since the loan facility to be secured was in tally with 88 hospitals and not anything more. This simply meant that, the additional figures were just mere additions to throw dust into the eyes of indigenes out of fear in the deadline given by the NDC.

We are by this petition requesting Your royal highest, Yagbon Wura Tutumba Boresa 1, President of the Gonja Traditional council to call President Akufo-Addo to order and to seek for clarification as to why the Savannah region is being disregarded in the affairs of this government.

This is not the first time President Nana Addo and the NPP government have taken the Savannah region for granted. It is worthy to note that, the abandonment of road projects, hospital projects, schools, water projects, electrification and other very key projects started by the erstwhile John Mahama administration are all part of the deliberate neglection.

We have resolved to bring this matter to your high office as we remain stakeholders and mean well for the development of this region.

Attached are documents to back our claims.