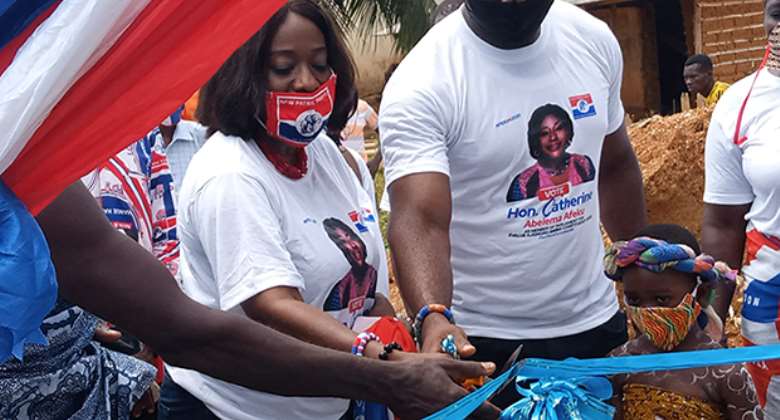 Catherine Abelema Afeku cutting the tape to commission the community

The Member of Parliament (MP) for Evalue-Ajomoro-Gwira, Catherine Abelema Afeku, has commissioned a community water project for the chiefs and people of Anibil in the constituency.

The project, a mechanized borehole with 6,000-litre water tank under the government's 'Water for all' project, cost GH¢50,000 and would serve the entire community and even beyond.

The project was also in fulfilment of a campaign promise the MP made to the people in 2016.

Mrs. Afeku thanked the community members for their commitment, hard work and sacrifices in ensuring the successful completion of the project.

The MP said the previous NPP government under former President Kufuor provided electricity and other basic amenities to help improve the quality of life of the people, and the current Akufo-Addo administration was continuing the good works.

She said apart from the water project, the government was also providing the community with a 10-seater toilet facility, adding that some schools in the area had also been benefitting from the school feeding programme.

“Anibil will continue to get its fair share of the national cake because of the good relationship that exists between the community and the NPP government. I can give an assurance that the needs of the community members will be met,” she stated.

The Chief of Anibil, Nana Akapole III, commended the NPP government and the MP for the developmental projects currently ongoing in the constituency and wished that the NPP government would be retained in the December general election to do more for the people.

The MP and her entourage later inspected progress of work on the Asasetre-Gwira Banso road as part of measures to fix the deplorable cocoa roads in the Gwira enclave.

Tony Nyarko Aidoo, Deputy Western Regional Manager of the Department of Feeder Roads, said the 21-kilometre road had been divided into three phases with three different contractors, and it was expected to be completed within 12 months.

The Chief of Gwira Banso, Nana Ette Akrade III, said even though the area grows a lot of cocoa, successive governments failed to construct the road and thanked the government for coming to their aid.