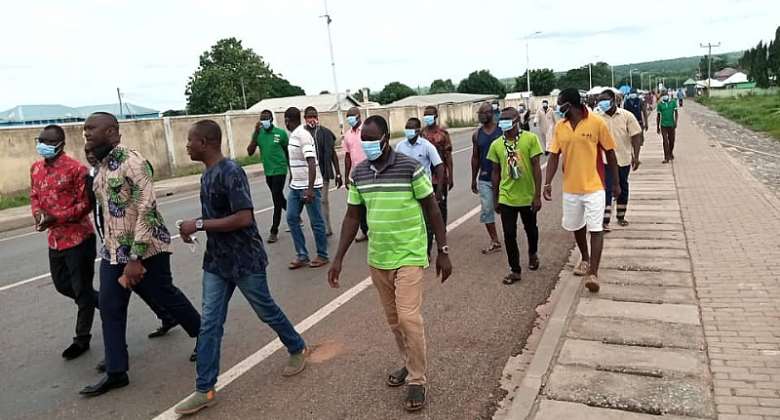 The Savannah Regional wing of the National Democratic Congress has petitioned the Overlord of the Gonja Kingdom, Yagbonwura Tutumba Boresa 1, over what they describe as 'disrespectful sentence' of Alhaji Osman Mimina Salifu, a sub-chief of Gonjaland.

Tagging the sentence as politically motivated, Mr. Malik Basintale, the Regional Communications Officer of the party noted that the decision to incarcerate the revered chief was without recourse to the customs, norms and tradition of our society.

In submitting the two paged petition to the Overlord at the Jakpa palace, he emphasized that Dinpo-wura Alhaji Osman is a noble man who has contributed enormously to the development and progress of Gonjaland.

"The political persecution by President Akufo-Addo and disrespectful sentence of a Gonja chief, Dinpo-wura Alhaji Osman Mimina Salifu without respect to our traditions and customs is regrettable. A noble man, enskinned by the Gonja kingdom as a chief due to his highly respected profile, A man who brought development, supported generations and contributed immensely to the progress of the Savannah region," he stated.

The NDC spokesman pressed on Yagbonwura to demand answers from President Akufo-Addo as to why he disregarded the tradition of Gonjaland to the convenience of politics that allowed that noble chief to be jailed.

The petition further pointed to the continuous neglect and disregard for the people of the Savannah Region in the sharing of the national cake by the Akufo-Addo led NPP government.

Whilst doubting the feasibility of the 88 district hospitals as promised by the president, the NDC wondered why the entire Savannah Region was not captured as beneficiary in the list released earlier on by the Local Government Minister.

They described as suspicious, the second updated list which captured two districts in the Savannah Region even though, the President announced that the region was to be allocated three district hospitals plus a regional hospital.

"To our dismay, the final list of 88 hospitals released came without even a single one allocated to the Savannah Region. When we quizzed, we were told that the government had forgotten of the Savannah Region, and that follow ups were made to get the matter resolved. We wondered how an oversight could still have the released list tally with the 88 number as other regions had theirs increased to fill the space of our omission.

"We termed the latter list dated 20th, May 2020, uncertified since the loan facility to be secured was in tally with 88 hospitals and not anything more. This simply meant that, the additional figures were just mere additions to throw dust into the eyes of indigenes out of fear in the deadline given by the NDC," he emphasised.

According to Mr.Malik, this administration has taken the Savannah Region for granted for far too long, citing the abandonment of road projects, hospital projects, rural electrification, schools and water projects started by the previous administration to buttress his point.

He appealed to the Overlord to use his powers as a major stakeholder to call President Akufo-Addo and his government to order.