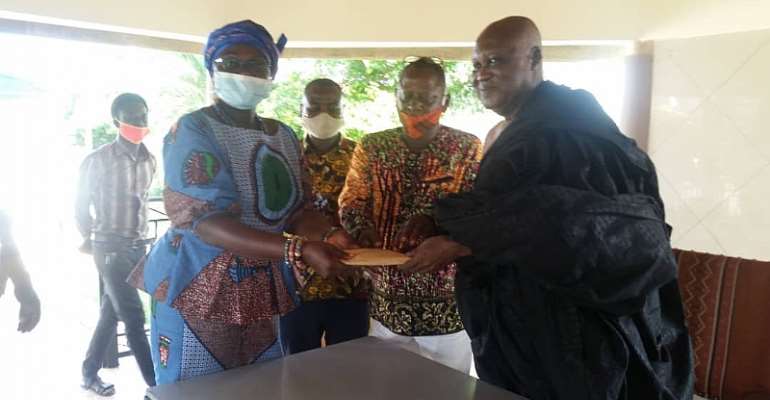 The Omanhene of Sunyani, Nana Bosoma Asor Nkrawiri II, has donated Ghc10,000 to the Sunyani Municipal Assembly’s COVID-19 Task Force to support its campaign against the spread of the disease in the area.

Making the presentation, the Omanhene commended the municipal assembly, especially the MCE, Justina Owusu Banahene, for working tirelessly over the last couple of months to deepen awareness about the disease and how to prevent it.

He entreated the good people of Ghana to religiously observe all the protocols outlined by government and the Municipal Assembly “to ensure that our fight against this dreadful Covid-19 will yield positive results.”

Nana Bosoma Asor Nkrawiri II advised parents and guardians to keep their children at home so that the government's objective of closing down schools will be achieved.

For her part, Justina Owusu Banahene, MCE for Sunyani who received the donation on behalf of the Assembly, thanked Omanhene and the entire traditional council for recognizing the effort of the Assembly and the Covid-19 Task Force, and coming to their aid.

She described the donation as timely as it would go a long way in the fight against the disease in the municipality and hoped that the gesture by the Omanhene would be emulated by other leaders and organizations, especially churches and corporate bodies.